Shen Yun 2023: The Biggest Season Yet

The upcoming tour of 8 companies spans the globe, lasting half a year 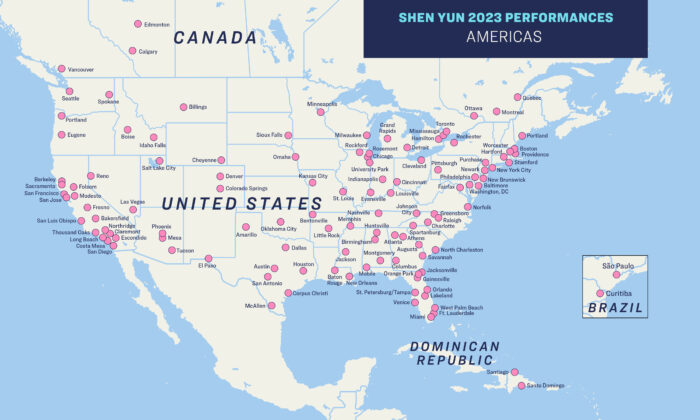 The Shen Yun 2023 world tour will cover five continents, more than 20 countries, and more than 180 cities.
By Epoch Newsroom

The 2022 Shen Yun Performing Arts world tour swept away the uncertainty and anxiety of the global pandemic and brought beauty and hope to millions of audience members around the globe. The classical Chinese dance company was met with full houses at top theaters and praise from audience members from all walks of life who had been waiting eagerly to see the performance.

“I was so enchanted by what they did,” said Marie Huitsing, head of global media operations at Netflix. “What they do is so dynamic.”

Shen Yun was founded in 2006 in New York, and its artists see reviving traditional Chinese culture as their mission. Through dance, music, bel canto, and other artistic forms, Shen Yun is bringing a once nearly-lost divinely inspired civilization back to life. In 17 years, Shen Yun has grown rapidly from one to eight equally sized companies, each with its own accompanying orchestra. At the same time, the scale of Shen Yun’s performances has also expanded.

Now, as the world is gradually settling back into normal life, Shen Yun’s artists are ready to set out with their all-new program and begin their 2023 tour. The new season will debut in America in Atlanta, Georgia on Dec. 24, 2022. Audiences in Japan and Germany will also be able to see the performance on New Year’s Eve.

According to information posted on Shen Yun’s website on Dec. 13, the Shen Yun 2023 world tour will cover five continents, more than 20 countries, and more than 180 cities.

This is thus far the largest-ever number of cities in a single season’s tour. Shen Yun 2023 will be touring in North America for nearly six months, and will be visiting 42 states in the United States, as well as the nation’s capital.

Shen Yun will visit four provinces in Canada, and the overall number of shows to be performed in Europe this season is double that of last season and will span at least 13 countries and more than 20 cities.

In the Asia-Pacific region, Shen Yun’s schedule includes more than 20 cities that span across Japan, Taiwan, Australia, and New Zealand. Shen Yun will also be going to Latin America; Brazil, the Dominican Republic, and other countries will be able to see the beauty brought by Shen Yun artists.

Shen Yun will be performing for many consecutive days in world-famous cities. To give a rough idea, there will be 10 performances in New York; seven in Washington; 25 performances in seven cities in Greater Los Angeles area; 10 in Houston; eight in Atlanta; eight in Dallas; 11 in Toronto; 17 in Paris; 10 in London; 10 in Berlin; 11 in Sydney; and seven in Taipei.

This year, the Shen Yun 2023 trailer says, “For each and every one of us, this is what you’ve been waiting for.”

Elegant dancing, sonorous music, resplendent costumes, soul-stirring vocals, and a wondrous animated backdrop—all of these elements come together on stage, unfurling the magnificence of Chinese civilization. In the performance are the nobility of human nature, solemnity of the divine, classics and wisdom of the ancients, and courage and faith of the modern world.

The pandemic hit the performing arts world hard, but Shen Yun has not seen the dip many other companies. In fact, its miraculous ascension post-pandemic has garnered many people’s attention. Audience reviews of the 2022 season spoke of Shen Yun’s value.

Dr. David West Reynolds holds a Ph.D. in archeology specializing in ancient Rome and Egypt. He’s also the New York Times #1 best-selling author of Star Wars guidebooks. His books have been translated into a dozen languages and have sold over 2 million copies around the world. After watching Shen Yun in Louisville, Kentucky on Oct. 9, 2021, Dr. Reynolds said, “I’m glad that I lived at a time where I could see [Shen Yun’s artistic director’s] productions instead of just reading about them in a history book, because they will be in history books someday.”

“You have to be here, to feel what we felt tonight,” he said. “Great art needs a great audience, and so to show up means we’re part of that tradition, too.”

Christopher Klopper, a professor and the Dean of the Australian College of Applied Professions, said Shen Yun gave him an “inspired energy.”

“I have walked away with a sense of energy—inspired energy—that both music, that dance visual spectacular, bring together,” he said on May 7, 2022, on Queensland’s Gold Coast.

“It is more than just a performance,” said Tom Hoang, attorney, who saw a performance in Houston, Texas, on June 5, 2022. “We appreciate that [Shen Yun] brings a message to the general public [that] what you do in your life now has consequences. And don’t believe in the noise and the visuals and everything of modern technology, because you’re still who you are … Our final destination is what we decide, it is what we do now. It’s not some predetermined destination. If you live a good life now, you reap the rewards.”

“Our bodies and souls received great comfort and recovery,” he said after seeing a performance on July 5, 2022, in Miaoli, Taiwan.

Iris Galey, a bestselling author from New Zealand, saw a performance in Basel, Switzerland on May 20, 2022. “I am overwhelmed—with beauty, with joy, with the work behind it and the creativity,” she said. “I am so grateful that we can always reconcile in humanity through art … you absolutely must see this in this day and age.”