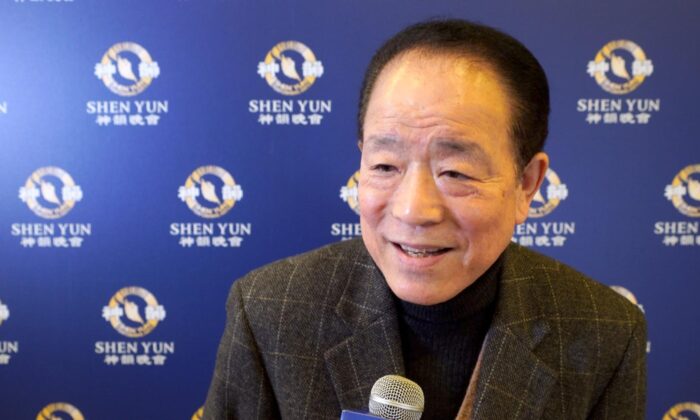 “I was awed by the performance with lively and colorful dances,” he said with praise. “The dancers must have devoted tremendous efforts into it.”

“I thought that there would only be dances, so I didn’t expect that the Chinese dance-dramas would be so wonderful,” he said. “Their exquisite and skillful performances touch the audience’s heart though it’s an art form that is without words.”

Um Junghaeng was also amazed by the dancers’ graceful movements with great unison and the original couture costumes with vibrant colors that feature various ethnic groups.

“Every movement has its artistic value,” he added. “The costumes’ colors are vibrant and gorgeous.”

“I was especially impressed with some pieces of the program, and I just don’t know how to explain it accurately,” he noted. “I was virtually immersed in the divine culture.”

As a professional in the music circles, the art school principal truly understands the truth behind the old saying: “One minute on the stage needs 10 years of practice off stage.”

“It takes tremendous efforts. With their [Shen Yun artists’] dedication, the dance movements are beyond the limits of the human body,” he said. “They are extremely beautiful.”

He also hopes that his students are able to learn something from Shen Yun in the future. “I hope to bring my students to see [Shen Yun performance] together with their teachers next time.”

As a musician who had performed and seen many music performances in China, Um Junghaeng especially enjoyed Shen Yun music performed by the orchestra blending Chinese and Western musical instruments. “Shen Yun’s music is a higher level performance, which is unparalleled,” he said.

“Shen Yun music is different from other music, and it can make people feel refreshed,” he said. “If I had missed this Shen Yun performance, I would have regretted it.”

“[The conductor] is a well-established musician,” he lauded. “And Geng Haolan is a dramatic soprano with emotive voice.”

“Watching the Shen Yun is the best birthday gift I have ever received,” he said with delight. “I feel like seeing Shen Yun again when it performs in another city.”

With reporting by Zhao Run-de and Billy Shyu.