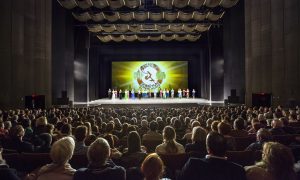 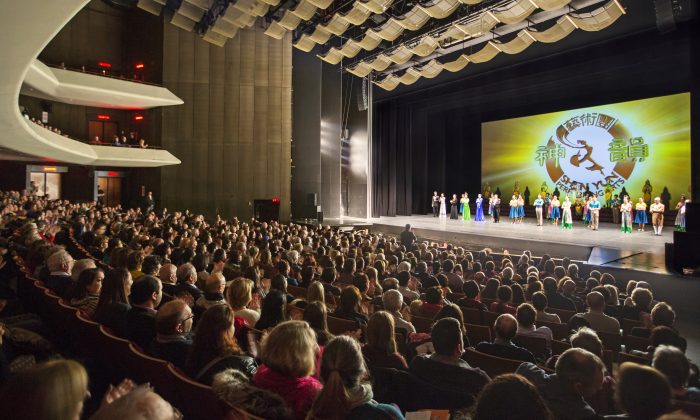 Sculptor Touched by Grace, Harmony, and Transcendence of Shen Yun

MONTREAL—Sculptor Jean-Jacques Chapdelaine has done sculpture on nearly every continent in his career, and his work is in many private and public collections, including in the Musée d’art contemporain de Montréal.

Having seen numerous demonstrations of artistic talent, when he attended Shen Yun Performing Arts on Saturday afternoon at Place des Arts, he was pleased to discover artistic excellence that transcended the ordinary.

“We are used to hear of the culture that always pushes the individual, and [with Shen Yun] it’s not based on the individual, so it comes closer to something that transcends, that would be closer to divine beings,” Mr. Chapdelaine said of the New York-based classical Chinese dance and music company.

Mr. Chapdelaine expressed his profound experience upon seeing Shen Yun, whose mission is to revive China’s 5,000 years of divinely inspired culture that was once almost lost following over six decades of communist rule.

It is a traditional culture centered on the concept of harmony between heaven and earth, whose essence is characterized by principles such as benevolence and justice, propriety and wisdom, respect for the heavens, and divine retribution, according to the Shen Yun website.

“Grace—I had emotions of grace,” Mr. Chapdelaine said, explaining that he noticed a touching harmony among the dancers as they performed, rather than a display of individual self-importance.

“It’s unity, the whole night, I was touched by the unity, the unity of the group—females as well as males. It was harmonious, very harmonious. The colours were harmonious too.”

Shen Yun features top artists, many of whom are winners of international competitions in dance, choreography, and music.

Another traditional Chinese belief is that good will be rewarded with good, and evil will meet with retribution, and this belief is conveyed by some of the dance stories presented by Shen Yun. Mr. Chapdelaine noted he found the presentations to be true to the virtuous principles being conveyed.

“There’s a lightness in it; it’s light, light, light. There’s no weight there—even in the fights with the forces of evil. It wasn’t heavy, it wasn’t presented in a heavy way,” he said.

He referred to this ability of the performers to communicate through dance as “compassion,” adding that “it’s really something to get the message across without speaking and making people understand all the messages. That is really rare.”

Mr. Chapdelaine also found it meaningful the way the principal dancers were introduced at the end of the performance.

“There’s a group conscience also that we don’t have here,” he said.

“Here, it’s individualism in everything. So there, they introduced the principal dancers after the performance, but it wasn’t their ego that they showed; it was like a demonstration of the talent they have.

Although the costumes are beautiful, Mr. Chapdelaine noted that what makes an excellent dance is something deeper that resides within the individual.

“These same costumes on somebody who doesn’t have the grace, nor the flexibility or body control, we wouldn’t have the result that we have here. It’s not the costume that makes the dance; it’s the beings in the costumes that make it all.”

He said he was completely captivated by and immersed in each dance: “I’m an observer, but I’m on the stage with them. I am with them, I am in their bodies,” he said.

Mr. Chapdelaine also enjoyed the most surface elements of the performance, the colours and the pageantry put on the stage.

“It’s wonderful to see the beauty of the costumes and especially to see the way they’re used,” he said.

“I also liked the synchronicity, all that they did with the backdrops,” he added, praising the coordination among the dancers and Shen Yun’s signature state-of-the-art animated backdrops that extend the stage.