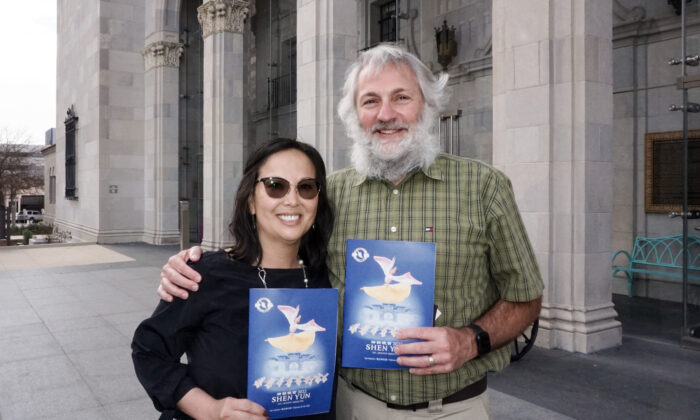 SAN ANTONIO, Texas.—Bucket lists usually consist of events that someone wants to experience before the end of their life. David Abraham fulfilled one item on his wife’s bucket list when he gifted Shen Yun Performing Arts tickets to his wife Elizabeth for Christmas.

“I think it was amazing. It was my first time going. It’s been on my bucket list to go and finally, my husband got me tickets for Christmas,” said Ms. Abraham.

“It’s amazing. I knew it was something that my wife wanted to do, and I was happy to be able to get tickets and glad they’re here in San Antonio so we could have this opportunity. It is a great show,” added Mr. Abraham.

The orchestra of New York-based Shen Yun features traditional Chinese instruments like the two-stringed erhu. Audiences also get to see the erhu in the spotlight. Ms. Abraham shared how much virtuosity of the erhu soloist amazed her.

“Yes, that was amazing! I have to look that up now. I’ve never seen that instrument and I love instruments,” she said.

Shen Yun is dedicated to reviving the 5000 years of Chinese civilization that had been all but lost after communism took hold of the nation. She could tell that everyone on stage and behind the scenes shared a passion for Chinese culture.

Ms. Lamerson was struck at how it seemed that Shen Yun didn’t have a star dancer or musician. All of the artists are equal in their roles and worked together as a team.

“I find them very interesting and they seem to like each other too. When you see there’s no prima donna. It seems that everyone really likes each other and they’re working together. Really trying to make a good performance, not just to try to show themselves off. And I like that. I really do,” she said.

Through their performances, Shen Yun is also raising awareness on the persecution of Falun Gong practitioners in China. Falun Gong is a peaceful practice that helps people improve the health of the mind and body using the guiding principles of truth, compassion and tolerance.

“Falun Gong is spiritual, it [is] meditation, morality, ethics, peace of mind, but we didn’t understand, until really sitting here,” Mr. Lamerson said. “Especially when the guy was singing and when you see the words, then it dawned on me.”

Shen Yun’s digital backdrop provides audiences with translations of the libretti so that people of every nation can understand the words being sung.