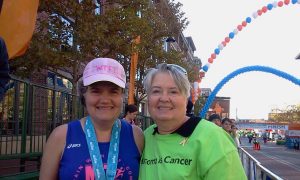 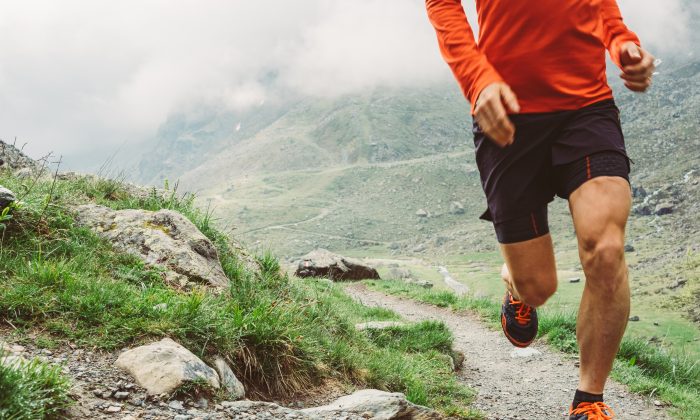 Running for the Body and Mind

Laura Bourdeanu vividly remembers the moment police told her that her best friend had been killed. Shocked and short of breath, Bourdeanu went for a walk to clear her head. Then she began to run.

“I was not a runner, but it felt so good to do it,” Bourdeanu said. “Every day after that, I ran a little more. It’s been 20 years, and I haven’t stopped.”

Bourdeanu, now 47, has never had any ambition to run a marathon or set records. Instead, she runs as a kind of meditation. She learned from her first run that it was a way to find a way forward in the midst of an overwhelming event. What she’s experienced every run since is that it clears her mind and puts her world into perspective.

It also offers her rare quality time alone to recharge and refresh.

“I appreciate life more, and the people around me, by having time by myself. I think we forget how important that time is,” said Bourdeanu. “You can watch TV or read a book, but it’s not the same, because your focus is on something else, not you.”

Your Brain on Running

As a nurse practitioner, Bourdeanu is familiar with all the physical benefits associated with running—it’s one of the most effective and accessible exercises for burning calories, improving your respiratory function, and strengthening your cardiovascular system. But it’s clear that the mental benefits are what keep her running first thing almost every morning.

“I know it sounds crazy for somebody to go running before work, and at some point in my life I felt the same way, but there is nothing better than that half an hour of running,” she said.

Bourdeanu is not alone. Nearly all the runners who The Epoch Times spoke to said the biggest reward they received from running was a clear, focused, and more creative mind.

Author Len Saunders has been an avid runner for almost 40 years. He says the concepts for the children’s books he’s written all came to him while running.

“It frees my mind,” Saunders wrote in an email. “I do my best thinking while I run. Sometimes, it helps me think out a problem, or to simply relieve stress I may have.”

Scientists have identified a few factors that may explain some of the positive mental effects of a good run. One is extra oxygen. Running makes you breathe harder and pump blood faster, bathing your brain in much more oxygen than it receives in a sedentary state, thus improving brain function. Aerobic exercise also stimulates your hippocampus, a master gland in your brain that governs learning and memory.

For those who run longer distances, there’s the euphoric runner’s high when the body rewards itself with calming chemicals. These include endorphins (hormones that fit into your body’s opioid receptors to relieve pain and relax muscles) and endocannabinoids (chemicals similar to the psychoactive constituents in marijuana that our body secretes in response to stress).

Alexandra Dayrit, PR manager for Gold’s Gym in the Philippines, says she runs primarily because it lifts her mood.

“Running makes me sane,” Dayrit said in an email. “It takes all my life’s stress away, and it gives me that added boost to tackle everyday challenges.”

For some, running can relieve anxiety and depression. Studies show that regular aerobic exercise may be just as effective as medication, without the side effects.

For 31-year-old Ashley Davidson, a busy PR director, running is primarily a stress reliever, but it has also given her more confidence.

“It’s really helped with my self-esteem, which has been pretty low my entire life,” she said.

Davidson started running in 2011, after her now ex-husband told her she needed to find a hobby. She has since run several marathons, half marathons, and 5Ks, but she recently took a break. The time away from running made her realize some of the attributes she was missing.

“I’ve not been sleeping as well as I usually do, and I’m not as creative. I feel my mind is a little more cloudy, and I think it’s because I’ve taken time off from running,” she said. “I’m a lot happier when I run.”

A big reason running is so effective at clearing your mind is it demands that you make the most of your body. With the world whizzing by as fast as your feet will allow, you’re forced to focus your attention on breathing, form, and movement.

Running also offers a small taste of flight. One foot is always in contact with the ground when you’re walking. When you’re running, you’re briefly airborne with each stride. However, such freedom means your body sustains more impact and faces a greater risk of injury when you run. But this doesn’t mean running is inherently harmful.

While many believe running is “bad for the knees,” research shows otherwise. In a 2017 study funded by the National Institutes of Health, leisure running was not found to cause long-term knee damage or osteoarthritis, contrary to what researchers anticipated. Runners were also less likely to have knee pain than non-runners. Other studies have shown that running can increase bone mass and slow bone loss.

Yet runners can still run into problems: Shin splints, runner’s knee, iliotibial band injuries, and more are common among runners of all levels. According to Nate Helming, San Francisco-based running coach and co-founder of The Run Experience, postural imbalances and other body mechanics problems are at the heart of these injuries.

Helming says that our bodies are well-designed for running, but our modern lifestyle has dramatically changed the way it was intended to move. Hours of sitting, texting, and other posture-contorting behaviors leave us with a slouchy vehicle that is woefully underprepared when we pick up the pace.

“Running requires more range of motion, greater speed, greater impact, and greater coordination,” Helming said. “If we’re moving with a limited capacity—our hamstrings aren’t as long, our hips aren’t as open, our shoulders are stiffer—that has mechanical consequences. When you add up enough time, it can lead to an injury.”

Injury prevention goes deeper than a hamstring stretch. Helming recommends four basic exercises to address the common weaknesses in our hips, core, and shoulders that we compensate for when we run: the squat, pushup, lunge, and the burpee—a pushup/jumping jack combo.

Many runners emphasize shoes as the primary protection against the rigors of running. Helming says to invest in something decent, but don’t rely on shoes alone for injury prevention.

“You need something that gives you cushioning and support, but know that shoes are not going to be the savior for you and your body,” he said. “Even the nicest shoes in the world can minimize impact and correct your mechanics only so much.”

Whether it’s on a treadmill, trail, or just a jog around the block, running is a convenient way to get in the daily 30 minutes of aerobic activity that health experts say we need to stave off obesity and chronic illness.

However, if it’s been several years since you’ve attempted to run, Bourdeanu advises you to take it slow.

“Start walking. Run for 10 seconds, slow down until you catch your breath, and run again. The next day increase to 15 seconds. Eventually, you’ll do a run,” she said.

With time, running can become an exhilarating experience. Los Angeles-based yoga teacher Janay Rose incorporates running a few times a week into her fitness routine. While yoga is still her primary exercise, she says running gives her an extra jolt of energy. “It hits me with that adrenaline. You can run away from everything going on in your life and really detox,” Rose said in an email.

However, you can get too much of a good thing. Studies find that while a moderate amount of running can strengthen joints and improve cardiac function, pushing beyond this limit too often for too long can wear the body down and lead to heart problems.

Bourdeanu says running can be addictive, especially when she’s overcoming a stressful time in her life. But seeing the damage of overdoing it keeps her from running too much.

“I have a lot of patients who are marathon runners who have no cartilage left,” she said. “I tell them, ‘Please don’t do this. It’s going to damage your joints.’ They say, ‘But it’s so much fun.’ Well, it’s fun now, but once you turn 45 or 50, the pain is not going to be much fun.”

Helming adds that the monotony of marathoning is not something our body was made to handle. For runners who seek a challenge, he recommends the hills, softer surfaces, and varied terrain of trail running.

“I don’t think we were designed to hit the same stride so much like in a marathon. Trail running is probably much more akin to what our body is used to,” he said. “I’ve found that runners who run trails are able to cover the same distances, if not more, without being as beat up and are usually a little bit healthier because of the demand of it.”

If you’d like to make running a part of your life, Helming recommends setting a plan that you can live with long-term. Challenge yourself, but don’t set the bar so high that you become overwhelmed and give up. Most importantly, have fun.

“Will power is a limited mental muscle. You will run out of it. So figure out how to make running not some masochistic, joyless exercise, but something that is enjoyable,” he said.