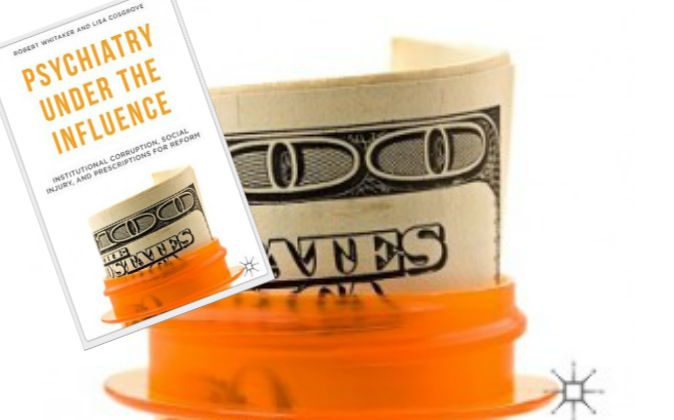 Review: Psychiatry Under the Influence

A new book explores the American obsession with chemical solutions for mental health care, and the lack of science to validate it
By Conan Milner
biggersmaller
Print

Prescriptions for psychiatric drugs have skyrocketed over the last few decades. In 1985, Americans spent about $800 million a year on pharmaceuticals designed to treat diseases of the mind. By 2011, annual drug costs rose to more than $40 billion.

As American mental health care has increasingly embraced pharmaceutical solutions, psychiatry has managed to attract many critics along the way. Two such critics are clinical psychiatrist and associate professor at the University of Massachusetts, Dr. Lisa Cosgrove, and award winning author, Robert Whitaker.

In a new book, “Psychiatry Under the Influence: Institutional Corruption, Social Injury and Prescriptions for Reform,” Cosgrove and Whitaker team up to explore how the modern model for mental health care was born, and what can be done to change it.

“Psychiatry Under the Influence” stands apart from other mental health care critiques because it considers the drug-centric profession through an ethical lens.

According to Cosgrove, the book avoids the blame and witch hunts that typically characterize corruption, and focuses attention on the larger picture.

“The institutional corruption framework is markedly distinct from the way people typically think about corruption,” she said. “Research fraud, while it certainly happens, is not the big problem.”

The authors point to guild interests and the allure of pharmaceutical money and prestige as the major corrupting forces that led to the current state of American mental health care. They say that 35 years ago an important change in the Diagnostic and Statistical Manual of Mental Disorders (DSM)—the bible of American psychiatry—helped set the stage.

When academic psychiatrists revised the DSM in 1980 (DSM-III), they took a bold new approach. While previous versions of the DSM had relied on psychoanalytic explanations to define mental disorders, DSM-III suggested that all mental problems had a biological cause.

This new disease model allowed psychiatry to break away from its much maligned Freudian past, secure insurance reimbursement with the promise of evidence based treatment, and provide the trade with tools and authority apart from its competitors, such as psychologists, social workers, and counselors.

Confidence was high that research would substantiate this new model, so much so that prominent academic psychiatrists were groomed as “thought leaders” to heavily promote this idea to the public. Previously, psychiatrists would have considered practitioner consensus, symptoms, and past traumas to diagnose disease. The new message was that mental disorders are all the result of a chemical imbalance in the brain, and drugs could be designed to fix it.

From a marketing and sales perspective, this model has been wildly successful. This treatment strategy has allowed psychiatry to expand its scope far beyond the realm of serious mental disorders such as bipolar, schizophrenia, and major depression. Psychiatrists now have diagnoses and drugs that cover just about everyone. Today, one in five Americans regularly takes at least one psychiatric drug.

The rub is that research was never able to validate the chemical imbalance idea, but very little has been done to re-educate the public of the true picture. Many psychiatrists and institutions still promote their drugs as functioning “like insulin for diabetics.”

“The chemical imbalance story makes it seem like they even know the pathology, but that’s just not so,” Whitaker said. “Once you start having care organized around a false premise it’s hard to have good care and an artful use of medication.”

All branches of medicine are subject to corrupting interests. But Cosgrove says that psychiatry is particularly vulnerable to industry and guild influences because, unlike physical diseases, there are no objective, biological markers for any psychiatric disorder.

“I think we can safely say we don’t know for whom the drugs work or why. Certainly many of them work for many people,” she said. “It’s not about being anti-medication. It’s about acknowledging medical uncertainties.”

“Psychiatry Under the Influence,” makes clear that psychiatry has been so committed to chemical solutions that not even contradictory evidence could stand in its way. The book points to several examples where prominent researchers would routinely dismiss or positively spin data that disputed the results they were hoping for.

According to Whitaker, even as psychiatrists admit the brain chemistry narrative has little science to support it, they still can’t put it down. Many still actively promote the idea to patients to make them feel better about the drugs.

“Psychiatrists don’t see themselves as misleading the public about the nature of these disorders,” he said. “If you ask them what the basis is for these disorders, they will admit they’re constructs. In my opinion there is an inherent contradiction in what they say they know to be true.”

The tragic fallout of this undying commitment to a shaky medical model is the increased medicalization of minor issues. For example, the latest version of the DSM now lists “binge eating disorder” as a disease. The disorder already has a drug designed to treat it—a stimulant called Vyvanse.

Cosgrove calls it a brilliant marketing strategy, but medically it represents a real step backwards.

“Have we learned nothing from the 60s, that we should not be giving women stimulants for eating disorders,” she said.

Other casualties of this medical model include the many patients prescribed treatment that have been shown to do more harm than good. “Psychiatry Under the Influence” highlights studies which showed that conditions such as attention deficit disorder and mild depression were actually made worse with long term drug treatment.

Cosgrove says that while trial transparency has improved, the industry still desperately needs a formidable watchdog. She calls for an approval system where regulators have to consider all of the trials and data on a drug. In the current system, drug companies can toss out problematic studies. As long as some show efficacy, the drug gets approval.

Adjusting the rules for insurance coverage could also help stem the tide of drugs. Cosgrove points to providers in Canadian provinces that reimburse for talk therapy. As a result, psychiatrists there prescribe drugs far less.

Whitaker says that part of the solution has to include stripping psychiatry of its ultimate authority over the broad domain of our mental well-being.

“I think after the past 35 years psychiatry has shown itself to not be a reliable provider of information in this domain,” he said. “Psychologists and sociologists should have a say in this so we don’t just see this as a medical problem.”