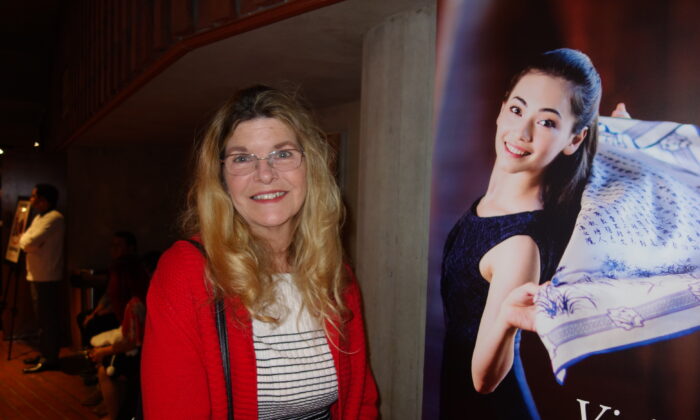 “This is a fabulous show. This is an unbelievably phenomenal show. The music is absolutely extraordinary. The dancers are over the top; the costuming is brilliant,” Smith said.

Shen Yun’s website explains: “The Shen Yun Orchestra is the first in the world to permanently combine classical Western and Eastern instruments. Ancient Chinese instruments such as the soul-stirring erhu and the delicate pipa lead the melody on top of a full orchestra of Western strings, percussion, woodwinds, and brass.”

In addition to the dance pieces, vocal soloists sing with the traditional bel canto technique that was used in ancient Chinese theater and early European opera. The soloists are accompanied by a piano.

“The singer and the pianist were absolutely superb, really first-rate,” Smith said. “I really appreciate they were playing a Steinway piano; that’s the best.”

She explained her own musical background: “I play the piano. I’ve played on the road quite a bit for major manufacturers in the past. I teach piano now, and I play a lot of gigs. I also play the cello professionally.”

She praised the two emcees, a man, and a woman, who introduce the Shen Yun dance and music pieces.

She admired the colors in Shen Yun and how the dancers interact with the animated backdrop.

“[The backdrop is] great, it’s exciting,” she said. “I think it’s beautiful.”

Shen Yun is based in New York and has several companies that tour simultaneously, giving performances around the world. Its mission is to revitalize China’s 5,000 years of history and culture for today’s audiences.

She was very interested in the spiritual aspect of China’s ancient culture, which she saw portrayed in Shen Yun.

“I’m fascinated with it. Absolutely fascinated,” she said. “They’re doing a great job.”

For those who haven’t seen Shen Yun, Smith said: “Definitely put it on your bucket list. Put it at the top. It’s so worth it, it is so unique, and it’s so enlightening. You will feel great when you leave. You’ll be smiling.”

With reporting by Lily Yu and Sally Appert.