Producer says ‘Shen Yun is epic. It will change your life’ 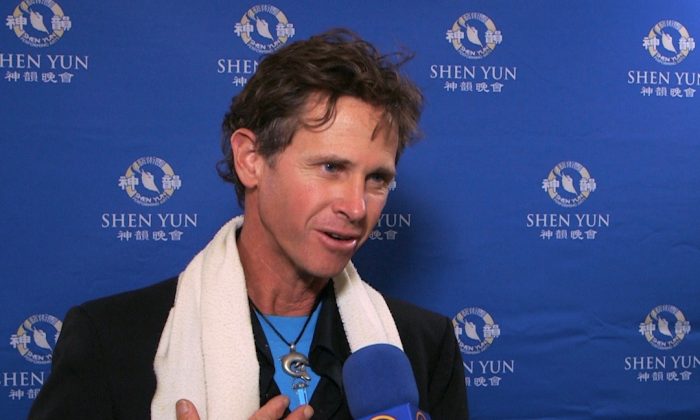 ESCONDIDO, Calif.—A. J. Goodwin is a co-producer of the Waterfall Music label, the original music of Paul Lloyd Warner, who is a prolific poet and composer. He has been recognized as one of America’s foremost composers of music inspired by the beauty of nature.

Mr. Goodwin had seen Shen Yun Performing Arts ads and wanted to see the performance, but could not make it year after year. His wish was granted this year. On Jan. 27, Mr. Goodwin attended the performance at California Center for the Arts.

“Today is my birthday and after selling over a million and a half copies of his music for the world, we come here to share Shen Yun and to see some of the greatest performances ever existing on the planet,” he said.

As a producer, Mr. Goodwin was thoroughly impressed with Shen Yun’s performance, recognizing the details and effort that went into the great production.

“When I came here, I saw the production. I could see everything from the performing art center to the individuals who have helped put this on, all the materials that [were given], and the booklets are just very impressive to show everybody all the different performers, and on the stage the people in production—must take hundreds of people, I know. I was impressed for every part of the performance. It was so great,” Mr. Goodwin said.

He so appreciated Shen Yun being here to help coordinate and make this happen, because he knew it came from their “hearts and souls.”

Since its beginnings in 2006, Shen Yun has been enchanting audiences around the world through classical Chinese dance, which is one of the most comprehensive dance systems of all time.

Mr. Goodwin marveled at classical Chinese dance and the synchronicity of the performers. “I love the underwater fairies,” he said. “The sea fairies [dance] was very impressive to me. But everything, every performance has something very unique and was very expressive. I love how everybody danced and the synchronicity was so in line. Everybody was on cue.”

He was referring to one of the dance pieces, “Fairies of the Sea,” featuring delicate fairy maidens, who in Chinese folklore were said to be only visible to the “pure of heart.” The dancers appear to glide on the surface of the sea, moving in unison with long silk fans and soft blue skirts, evoking rippling waves.

Each performance consists of approximately 20 vignettes, taking the audience on a journey of 5,000-year history, from the Yellow Emperor descending from the Heavens to rule the Middle Kingdom, and through the Tang and Song Dynasties, all the way to modern times.

Mr. Goodwin was moved by the abuse of human rights in China, which a few of the dances about modern times depicted. He was also glad that one of the dances brought the plight of Falun Dafa into the limelight.

Two of the vignettes, which portray Falun Dafa practitioners standing courageously and compassionately in the face of persecution, are moving and thought-provoking for many audience members.

“It saddens me to know that this is happening in … in China. Even in our modern day world, there is an iron hammer that is controlling how people want to think independently. And it saddens me. Yet I feel that if we come together, with the internet, we as the people of the planet, maybe we can find the best way to bring solutions, and the best management to let people think independently, to create joyous lives even if we live side by side and have differences.”

To sum it up, Mr. Goodwin said, “Shen Yun is epic. It’s like nothing you’ve seen before. It brought me into happiness and joy, something that I will remember the rest of my life. Come see Shen Yun as soon as you can. Shen Yun will change your life. It’s transformational, and again, Shen Yun is epic.”