Photographer: Shen Yun, ‘The eighth wonder of the world’ 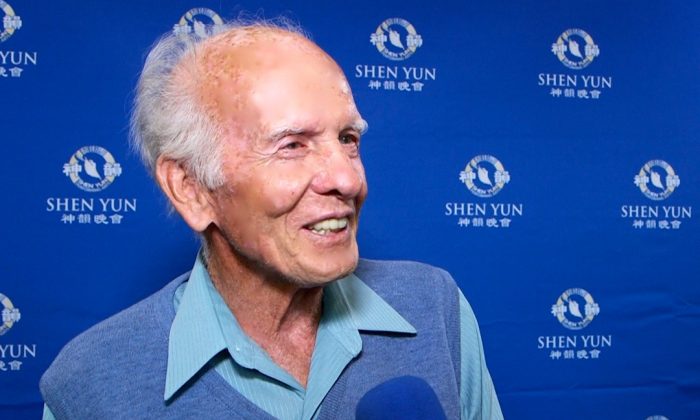 Joe Heard after Shen Yun Performing Arts every year at the California Center For The Arts, Escondido, Jan. 27, 2016. (Courtesy of NTD Television)

ESCONDIDO, Calif.—There’s something special about Shen Yun Performing Arts that has theatergoers returning year after year. Joe Heard and his wife saw the performance for the sixth time Jan. 27 at California Center for the Arts.

Mr. Heard, who describes himself as a lifelong photographer, had a new insight this year.

“I thought of something today that I hadn’t thought of before about this show. You know there are seven wonders of the world. I’ve seen several of those, but honestly, for anyone who hasn’t seen this, they’re missing the eighth wonder of the world,” he said.

Mr. Heard said he enjoyed the performance tremendously and that every year it’s fantastic. “Honestly,” he added, “this is the best one I’ve seen out of all of them. Perfect.”

Shen Yun is a New York-based classical Chinese dance and music company that tours throughout the world each year with an entirely new performance, from the richly colored costumes, the story-based vignettes, the digital, animated backdrops, to the orchestral arrangement.

Audiences are taken on a 5,000-year journey of Chinese civilization, which is believed to be divinely inspired. From the Yellow Emperor descending to Earth and ruling China, to the Tang and Song Dynasties, through to modern times, “mortals and divine beings merge on stage as one,” according to Shen Yun’s website. “Principles such as benevolence and justice, propriety and wisdom, respect for the heavens, and divine retribution, all come to life, washing over the audience.”

Mr. Heard was particularly moved by the last piece, “Hope for the Future,”  in which faithful people in modern times are persecuted but, ultimately, triumph.

Each time Mr. Heard watches Shen Yun, he feels something special that he wants others to experience.

“I can’t say enough about it,” he said. “[People] have no idea of what they’re missing until they come here and see this show. I brought guests with us today, and the lady, this year is her first time, and she had tears in her eyes. So that made my day.”