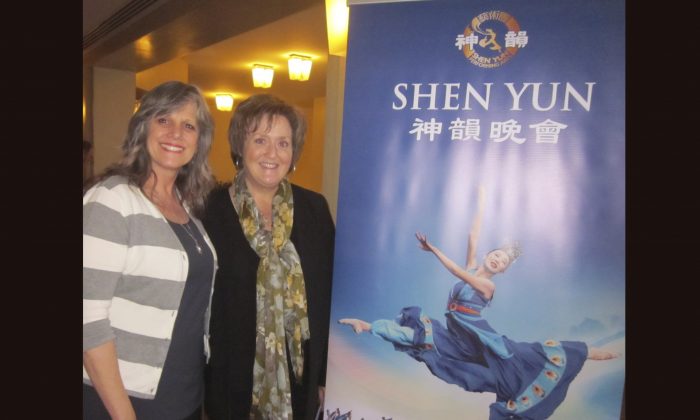 ESCONDIDO—Lori Grimes, a musical theater director, left the California Center for the Arts in awe on Jan. 28, after attending a Shen Yun Performance.

“It was so much more spiritual than I thought it was going to be,” she said.

As an expert in musical theater, Ms. Grimes said she was impressed by the costumes and props that she saw during the performance.

“I was trying to get ideas from the beautiful costumes—the scarves, the handkerchiefs!” Ms. Grimes said. “It was just so amazing.”

Shen Yun’s dazzling costumes vary from dragon robes, to phoenix coronets, to a traditional warrior’s helmet and armor and more.

“The beauty…and the depth of culture—it was just overwhelming,” Ms. Grimes said. “The music was amazing.”

Each Shen Yun dance is accompanied by a live orchestra that consists of Eastern and Western instruments—where the grandeur of trumpets, cellos, violins harmonize the delicate tones of Chinese instruments.

Ms. Grimes felt there must have been a feeling of awe, seeing the traditional China, throughout the auditorium.

“I think the spiritual beauty, the costumes, and all of it together, was shocking,” she said. “It was all so beautiful.”

Ellen Gilbert, a nurse assistant who attended the performance with Ms. Grimes, had a similar reaction.

“I’m just so amazed,” Ms. Gilbert said. “It communicated so much of the Chinese mind and heart…the passions, the beauty, the pain, and of their history, and of the struggles they’re still having, and the spiritual nature of man.”

To know that is in the heart of every culture, of humans, it made me cry.
— Ellen Gilbert

Ms. Gilbert was touched by the deep spirituality of traditional Chinese culture and left the auditorium with the feeling of hope.

“The hope that is common to man. That we have a future. That this life is not all there is,” Ms. Gilbert said. “To know that is in the heart of every culture, of humans, it made me cry.”

“The hope, that was the part that I got emotional about,” Ms. Grimes said. “The future hope.”

“I want to bring everyone to see it,” Ms. Grimes said.

“So much of it really touched our hearts. We feel very deeply for our brothers and sisters in China and all those who have less freedom,” Ms. Gilbert said. “This is why we wanted to come, to support their voice.”