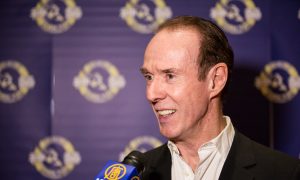 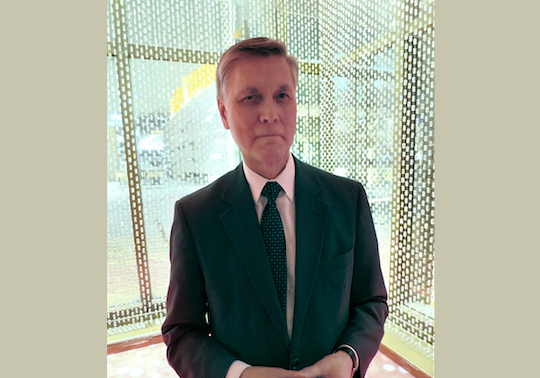 Harry Chan was impressed by the dances and the history alike when he attended Shen Yun Performing Arts at Place des Arts in Montreal on Jan. 8, 2015. (Mathieu Côté-Desjardins/Epoch Times)
Canada

MONTREAL, Canada—Harry Chan, a longtime business owner in the library services business, brought his wife to see Shen Yun Performing Arts for her birthday because “she kept dropping hints that she would like to go,” he said.

As it turned out, not only did his wife very much enjoy the renowned classical Chinese dance production, as someone whose hobby is history Mr. Chan himself was greatly impressed when the couple attended the show on Thursday night, Jan. 9, at Théâtre Maisonneuve at Place des Arts.

“It was very impressive,” said Mr. Chan, president of Bibliofiche, a Montreal-based company that has been in the library services business since 1969, distributing library supplies and furniture as well as producing software to manage library information centres.

New York-base Shen Yun Performing Arts has been wowing audiences for nine years now with the beauty of artistry and its mission of reviving 5,000 years of divinely inspired culture.

Shen Yun Performing Arts International Company, one of Shen Yun’s four touring companies, is in Montreal for another four performances until Sunday night.

Mr. Chan, who is partly of Chinese descent, was impressed by the dances and the history alike.

Shen Yun features classical Chinese dance, one of the oldest and most comprehensive dance systems in the world, passed down through thousands of years in palaces, among the people, and through ancient plays. According to the program book, it is “a dance form built on profound traditional aesthetics.”

Mr. Chan was surprised to learn that many techniques now seen in gymnastics, acrobatics, and figure skating originate from classical Chinese dance. He was also impressed by the overall artistry of the performance.

Mr. Chan also had his eye on Shen Yun’s state-of-the art animated backdrops that accompany the performances and often come to life to interact with the dancers on stage.

“It was a very interesting use of media. The visual effects were quite unexpected actually. I thought that worked very well,” he said.

“My hobby is history. I was going to teach history but I ended up being a businessman. It’s kind of interesting to come and see this part,” Mr. Chan said.

He was impressed to see the cultural diversity of China that Shen Yun depicted, such as the ethnic dances of the Tibetans, the Mongolians, and the Hmong people, among others.

“It was interesting that there are some themes that are quite cross-cultural—themes of compassion, kindness, perseverance. Also evil and how evil is portrayed, how it is expressed and how it is handled by the culture, by the religious beliefs, or through other means.”

Mr. Chan also noted the spirituality depicted in Shen Yun’s performances, much of which has guided the Chinese people through millennia.

“What was fascinating to me was the perception of some sort of divine being in the universe that was important and that influenced us whatever our circumstances are,” he noted.

“It’s a pretty universal theme in cultures,” he said.