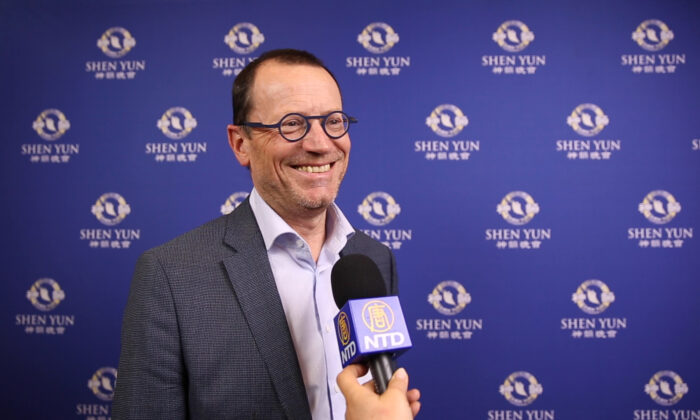 "A harmonious and beautiful resonance between the music, the dancers, the images projected in the background, in a remarkable 3-D effect," said Thierry Pédeloup after seeing Shen Yun at the Corum in Montpellier, on March 11, 2020. (NTD Television)

MONTPELLIER, France—Thierry Pédeloup, founder of the ETHICS Group, which supports companies and organizations in their transformation, attended Shen Yun Performing Arts at the Corum in Montpellier on March 11. The man, whose professional motto is “emotion and wisdom” found the performance enlightening, he described the show as nothing short of magnificent.

Pédeloup was imbued with emotions all through the “beautiful, very colorful scenes, filled with movement and rhythm.”

“It grasps your attention and yields emotions,” he said, adding that the show also fosters wisdom by deep diving into “history, philosophy and this meditation. The rhythm is quite amazing.”

The beautiful learning experience on traditional Chinese culture was enjoyable and easy to go through due to what the manager calls “the crossroads of the West and the East.”

“I believe,” he added, “that in philosophical terms it comes together, it permeates on both sides. And that’s always a good thing, at the crossroads of both worlds.”

Traveling from Toulouse to attend the show, the coach did not regret the trip which allowed him to discover, “a classic show and at the same time a touch of modernity, a great show!”