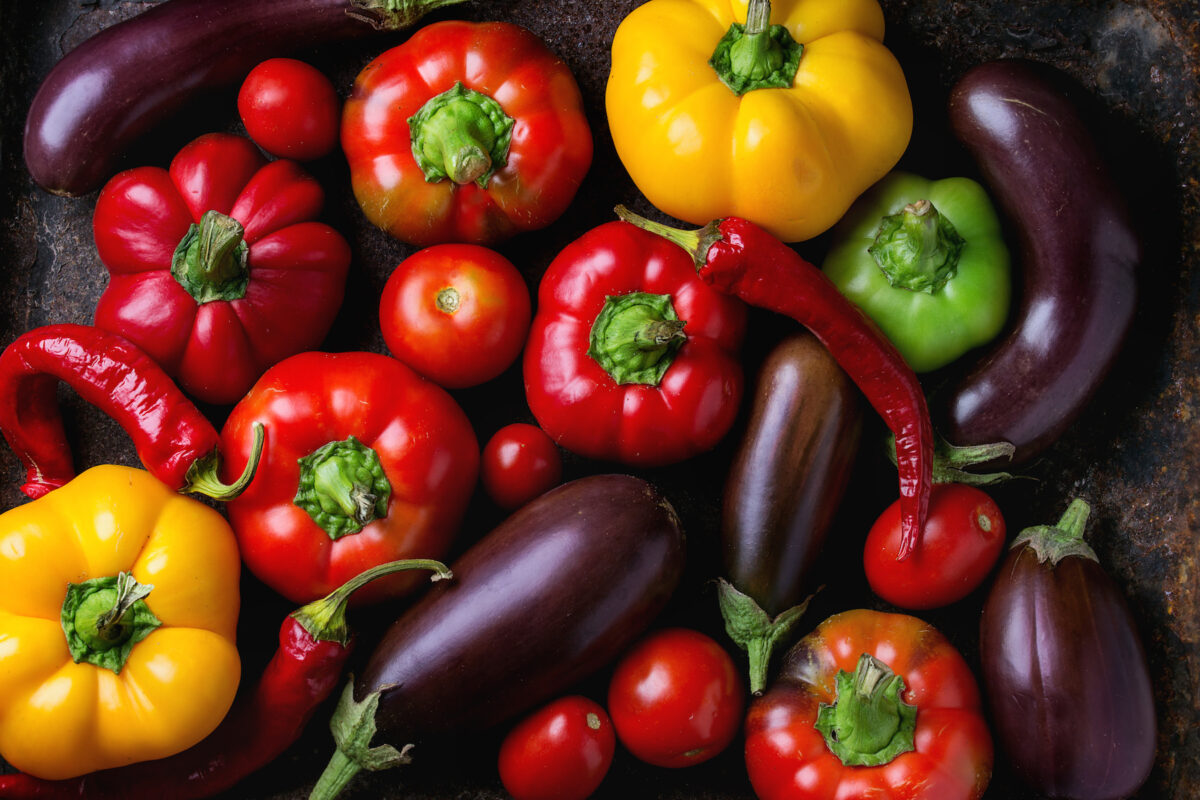 Among the most problematic lectin-containing foods are beans, grains, legumes and members of the nightshade family like eggplants, potatoes and peppers (By Natasha Breen/Shutterstock)
Nutrition

Limit the Lectins: How Lectins Can Harm Your Health

Many lectins can cause inflammation, while some increase your blood viscosity, interfere with gene expression and disrupt your endocrine function.

Lectins can be a common and hidden source of health problems and weight gain, even if you eat an otherwise healthy diet.[1] Lectins have been linked to autoimmune reactions and inflammation, and many are toxic to your cells and nerves. Certain types of lectins may increase your blood viscosity, interfere with gene expression and disrupt your endocrine function.

If you are dealing with an autoimmune disease, you will need to be especially careful with lectins, and you may benefit from a lectin-restricted diet. That said, it is nearly impossible to avoid lectins 100 percent of the time.

I do not recommend a lectin-free diet simply because you’d miss out on antioxidants and other nutrients in lectin-containing foods, including many otherwise nutritious vegetables. A better approach is to consume lectins occasionally and pay attention to how they affect you.

If you consistently experience bloating, gas and joint pain after eating beans, for example, your body may be reacting to the lectins. How you prepare lectin-containing foods makes a big difference in your body’s ability to handle them, and using a pressure cooker is by far the best approach. If you’ve been eating a whole-food diet, yet find yourself struggling with unexplained weight gain and/or stubborn health problems, it might be time to limit the lectins.

Lectins are sugar-binding plant proteins that attach to your cell membranes. They are a form of protein found in all kinds of plants and animal foods, which some consider to be a low-level toxin. Lectins provide a built-in defense mechanism that triggers a negative reaction in predators, aiding in their survival. About plant lectins, Dave Asprey, four-time New York Times best-selling science author and founder of Bulletproof.com, states:[2]

“There are countless varieties of lectins in nature … Plants evolved to reproduce. They actually have no interest in being a food source for you, or even for insects or fungi. Since they are not good at running away, plants developed natural pesticides and repellents to protect themselves and their seeds from hungry animals.”

“Lectins are abundant in raw legumes and grains, and most commonly found in the part of the seed that becomes the leaves when the plant sprouts, also known as the cotyledon, but also on the seed coat. They’re also found in dairy products and certain vegetables.

Lectins in plants are a defense against microorganisms, pests and insects. They may also have evolved as a way for seeds to remain intact as they passed through animals’ digestive systems, for later dispersal. Lectins are resistant to human digestion and they enter the blood unchanged.”

According to Harvard Health,[4] “lectins can bind to cells lining the digestive tract, [which can] disrupt the breakdown and absorption of nutrients, and affect the growth and action of intestinal flora.” High levels of lectins are found in beans, grains and legumes, as well as dairy and vegetables within the nightshade family. Many other foods contain lectins, at lower and less potentially toxic amounts.[5]

How Lectins Can Harm Your Health

Because they resist digestion, lectins act as “antinutrients,” which means they have a detrimental effect on your gut microbiome by shifting the balance of your bacterial flora. One of the worst culprits is wheat germ agglutinin (WGA), which is found in wheat and other seeds in the grass family.

I consider Dr. Steven Gundry, author of the book “The Plant Paradox: The Hidden Dangers in ‘Healthy’ Foods That Cause Disease and Weight Gain,” to be one of the best sources of information regarding how lectins can harm your health.

He suggests some plant lectins can contribute to leaky gut by binding to receptor sites on your intestinal mucosal cells, thereby interfering with the absorption of nutrients across your intestinal wall. Compared to WGA, gluten is a minor problem, says Gundry.

That’s because WGA has been shown to be one of the most efficient ways to induce heart disease in experimental animals. Due to their negative autoimmune and inflammatory effects, lectins are particularly toxic to anyone dealing with an autoimmune disorder.

If this is you, you may want to consider eliminating lectins or drastically reducing your intake. One manner in which lectins stir up trouble in your body is through molecular mimicry.

For example, by mimicking proteins in your thyroid or joint spaces, lectins can trick your body into attacking your thyroid gland and contributing to rheumatoid arthritis. Part of this disease process results in lectins and lipopolysaccharides (also known as endotoxins) penetrating your gut wall, causing a strong immune response.

Should You Avoid Beans and Other Lectin-Rich Foods?

If you are struggling with an inflammatory or autoimmune condition, you may be among those who need to be careful with respect to lectin-containing foods — specifically beans and legumes, grains and nightshade vegetables. As Gundry told Yahoo! News, “My research and others suggest that lectins cause most heart disease, arthritis, dementia, diabetes and all autoimmune disease.”[6] A lectin-restricted diet may be helpful if you are dealing with:[7][8][9]

Are All Lectins Bad for You?

While Gundry declares lectins the greatest danger in the American diet, especially for those with an autoimmune disease, the truth is some lectins, in small amounts, can provide valuable health benefits.

Precision Nutrition states: “Lectins are thought to play a role in immune function, cell growth, cell death and body fat regulation.”[10] It seems most problems arise from overconsumption or continued consumption, even in small amounts, of certain lectins your body simply cannot tolerate.

From my perspective, it would be a mistake to assume all lectins are bad for you. One of my favorite foods, avocado, contains the lectin agglutinin (persea Americana agglutinin), but I continue to eat them regularly and would not consider them to be a food to avoid. Avocados are a healthy food, and research indicates the agglutinin found in them is devoid of specificity for carbohydrates — it interacts with proteins and polyamino acids instead.[11]

Although tomatoes, as part of the nightshade family, are often listed among the most problematic lectin-containing foods, the heat of cooking them brings about some positive benefits. The antioxidant lycopene in tomatoes has enhanced bioavailability from heating,[12] making tomatoes healthy in other ways. Bean lectins, however, are accompanied by more potentially toxic or allergenic effects. Beyond their lectin content, beans also are high in net carbs.

For this reason, they are best avoided in the initial transitional stages of a ketogenic diet. As you can see, the choice for or against lectins hinges on the particular food in question and the effects lectins have on the eater. While a good deal of controversy has been stirred, the presence of lectins is by no means a sole determinant of the overall value of a particular food to your diet.

The Most Damaging Lectins to Avoid

Most lectins are proinflammatory, meaning they trigger inflammation and create advanced glycation end products. C-reactive protein is one example of the many lectins you have circulating in your body right now, and it’s used as a marker of inflammation. Lectins are also immunotoxic (capable of stimulating a hyperimmune response), neurotoxic and cytotoxic, meaning they’re toxic to your nerves and cells and may induce apoptosis (cell death).

Certain lectins can increase your blood viscosity by binding to your red blood cells. This makes your blood cells sticky, resulting in abnormal clotting. Some lectins, such as WGA, have been known to interfere with gene expression and disrupt your endocrine function. Additionally, research in the journal Artherosclerosis shows that excess leptins can cause:[15]

Equally worrisome is the reality that lectins promote leptin resistance, thereby increasing your risk of obesity. All of these factors can predispose you to disease. If you have any kind of health problem in which lectins are a suspected contributor, you’d be wise to eliminate the following foods from your diet entirely:[16]

You may have mistakenly believed you’re lactose intolerant when the effects could actually be a response to the casein A1 in certain types of milk. The best milk to drink is raw milk from organic, grass fed, casein A2-producing cows. Jersey and Guernsey cows produce either casein A1 or A2,[20] so you’ll need to check with the farmer to confirm the type of milk produced. Avoid milk from Holsteins and Ayrshires because they produce heavier amounts of casein A1.

Ways to Cut the Lectin Content in High-Lectin Foods

After eliminating the worst offending high-lectin foods from your diet, you can further reduce lectins with the following tips:

Tips for Reducing Lectins in Beans and Potatoes

If you choose to eat beans, it’s imperative you prepare and cook them properly, mainly because eating raw or undercooked beans can have acute, toxic effects. The toxin phytohemagglutinin is common in many varieties of beans, and concentrations are especially high in raw, red kidney beans.

The U.S. Food and Drug Administration (FDA)[26] states eating as few as four or five raw beans may cause phytohemagglutinin toxicity, which is often marked by extreme nausea, vomiting and diarrhea. The FDA notes several incidents of poisoning with respect to the undercooking of beans using slow cookers and Crockpots.[27] To make beans safer to eat, be sure to:

The lectin content in potatoes, which are a member of the nightshade family, will also be reduced by cooking, although only by 50 to 60%. On the positive side, most potatoes contain digestive-resistant starch, which consists of complex starch molecules that resist digestion in your small intestine. These starches slowly ferment in your large intestine, where they act as prebiotics that feed your healthy gut bacteria.[30]

Why You Should Limit, Not Eliminate, Lectins

Gundry and some scientists make a strong case against lectins due to their potential to wreak havoc on your health. Given the number of lectin-containing foods, however, it would be nearly impossible to eliminate them from your diet entirely. The list of lectins within the vegetable kingdom alone is lengthy, and some lectins do have health benefits.

Many lectin-containing vegetables also contain polyphenols, which are micronutrients with antioxidant activity that play an important role in preventing and reducing the progression of cancer, diabetes, heart disease and neurodegenerative conditions. Polyphenols are also regarded as prebiotic, increasing the ratio of beneficial bacteria in your gut, which is important for disease prevention and weight management.

While you don’t want to miss out on the polyphenols, it’s well worth your time to experiment and identify lectins that may be problematic for your body. Particularly if you are eating a healthy, whole-food diet but continue to have health problems, it may be time to limit the lectins. Such a change might possibly be the key to improved health and healing.

[2] Bulletproof.com, Revenge of the Beans

[3] Precision Nutrition, All About Lectins: Here’s What You Need to Know

[5] Authority Diet, Dietary Lectins: What Are They and Should You Be Concerned?

[10] Precision Nutrition, All About Lectins: Here’s What You Need to Know

[23] Precision Nutrition, All About Lectins: Here’s What You Need to Know

[24] Precision Nutrition, All About Lectins: Here’s What You Need to Know

[28] Precision Nutrition, All About Lectins: Here’s What You Need to Know