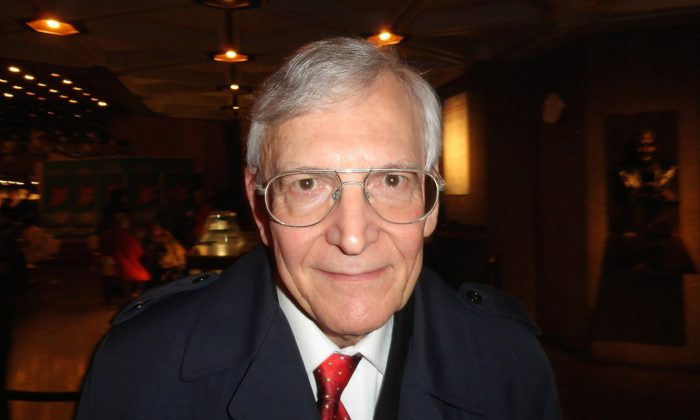 Shen Yun takes its audience on a journey through 5,000 years of civilization presenting authentic Chinese culture. Its mission is to revive a culture that has been suppressed and destroyed by decades of communist rule.

The basis for Shen Yun’s performance is classical Chinese dance, an ancient art form refined through the ages, dynasty after dynasty. Shen Yun also presents ethnic and folk dances showing the different cultures within China and around its borders. This year Shen Yun featured dances of the Yi and Hmong ethnicities, as well as a Tibetan dance and a Mongolian dance.

“I like very much the artistic aspect of the show, classical dance especially, and also ethnic dance,” said Mr. Vincelette.

Mr. Vincelette specializes in civil law and philosophy of law. He is a recipient of the Governor General’s gold medal for his thesis about the common good as a source of legal interpretation.

“The Chinese tradition, the refinement, the beauty, that I appreciated very much,” said Mr. Vincelette. He was accompanied by his wife Odette. Their children had given them tickets to see Shen Yun as a Christmas present. The couple was seeing Shen Yun for the first time although they do come to see shows at the NAC from time to time.

“I was very satisfied,” said Mrs. Vincelette who was very impressed with the visual aspects of Shen Yun with its dazzling animated backdrops and colourful costumes. “The sky, the nature picture, it was very beautiful, the flowers…special, special,” she said.

The two emcees explained to the audience that they cannot see a show like Shen Yun in China today. China’s divinely inspired traditional culture has nearly been lost in China proper, explains Shen Yun’s website.

“Those are very old and refined traditions, actually,” commented Mr. Vincelette when asked about Shen Yun’s mission. “It would be a pity to lose those and it is good to share that.”

“It is part of the human culture also. I appreciate that very much,” said Mr. Vincelette.

Shen Yun wrapped up its four-show stop in Ottawa delighting another full house despite freezing rain and difficult driving conditions. Shen Yun’s International Company next heads to Montreal from Jan. 7 to 11.