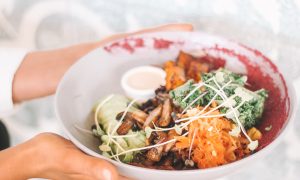 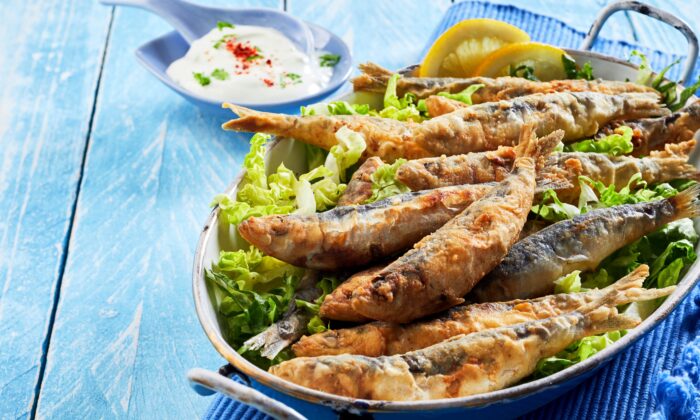 The humble sardine is getting some attention. (stockcreations/Shutterstock)
Mind & Body

Researchers found that people with prediabetes who ate two cans of sardines each week significantly lowered their risk of developing Type 2 diabetes, lowered their insulin resistance, and lowered their blood pressure as well.

Type 2 diabetes is a metabolic condition that’s affected by several factors, including the foods you eat and the amount of exercise you get. There are several significant consequences of Type 2 diabetes, including neuropathy (nerve damage), loss of sight, kidney disease, and heart disease. Recent data published in Clinical Nutrition in March suggests people who face a greater risk of developing diabetes may want to eat more sardines.

Risk factors for Type 2 diabetes include being overweight, having a family member with Type 2 diabetes, being physically inactive, and having been diagnosed with gestational diabetes—diabetes during pregnancy.

Prediabetes is a condition in which your blood sugar level is too high, but not high enough for Type 2 diabetes. Nearly 88 million adults in the United States have prediabetes, and a vast majority of those don’t know they have it. Prediabetes also increases your risk of heart disease and stroke.

According to the National Institute of Diabetes and Digestive and Kidney Diseases, there are an estimated 34.2 million people in the U.S. with diabetes. This is 10.5 percent of the population. Nearly 7.3 million of those people don’t know they have diabetes. You may help reduce your potential risk of developing this condition by making dietary and exercise changes.

2 Sardines a Day May Keep Diabetes at Bay

Adding sardines to your diet is one simple change you can make that may have a positive impact on your risk for diabetes. The 2021 Clinical Nutrition study, conducted by researchers at the Universitat Oberta de Catalunya (UOC) in Spain, found that eating sardines consistently may have a protective effect against developing Type 2 diabetes.

The researchers enrolled 152 people who had a diagnosis of prediabetes and were at least 65 years old in the study. In this study, they defined pre-diabetes as having glucose levels between 100 and 124 milligrams per deciliter (mg/dL). The whole group was placed on a nutritional program to help reduce the risk of developing Type 2 diabetes.

They were then randomized into a control group and an intervention group, members of which consumed approximately two cans of sardines in olive oil each week. The participants were given instructions to eat the entire sardine without removing the bones and were given a list of recipes.

However, in the sardine group, 37 percent were at high risk of developing Type 2 diabetes before the intervention began. At the end of one year, this dropped to 8 percent. The researchers also found there were other measurable parameters that improved in the group that consumed sardines each week.

These included a reduction in insulin resistance, a rise in HDL cholesterol, and an increase in adiponectin, a hormone that accelerates the breakdown of glucose. They also measured a decrease in blood pressure and triglycerides.

The study’s lead researcher, Diana D. Rizzolo, believes sardines should be recommended as a food as opposed to separating the nutritional benefits from the fatty fish, which are rich in omega-3 fatty acids, calcium, vitamin D, and taurine.

“Not only are sardines reasonably priced and easy to find, but they are safe and help to prevent the onset of type 2 diabetes. This is a huge scientific discovery. It is easy to recommend this food during medical check-ups, and it is widely accepted by the population,” she said in a statement.

“As we get older, restrictive diets (in terms of calories or food groups) can help to prevent the onset of diabetes. However, the cost-benefit ratio is not always positive, as we found in other studies,” said Rizzolo.

But despite the fact that the study was conducted with older participants, she believed the sardine diet intervention could have equally significant preventive effects in younger people.

Sardines Are High in Omega-3 Fat

Sardines are a fatty fish, high in omega-3 fatty acids. After the data analysis, the UOC researchers stated they planned to study how sardines may affect the gut microbiome. Eating a diet high in omega-3 fats has already demonstrated a protective effect on certain health markers.

The rise in chronic inflammatory diseases in the past decades is likely associated with the ubiquitous use of vegetable oils and processed foods high in omega-6 fatty acids. Although omega-3 and omega-6 fatty acids are essential for good health, a correct balance is essential.

Many people consume far too many omega-6 fatty acids found in everything from french fries to frozen meals and salad dressings. Ideally, you want to maintain a ratio of 4-to-1 of omega-6 to omega-3 fats or less. Yet, this can be nearly impossible if you are regularly eating processed foods or restaurant fare.

In my view, one of the most hazardous fats in the human diet is omega-6 linoleic acid (LA). Processed vegetable oils are a primary source of LA, but animal foods such as chicken from concentrated animal feeding operations and farmed salmon also have a high amount thanks to the food they are fed, which is high in LA-rich grains. There is evidence to suggest that an excessive amount of LA plays a role in many chronic diseases.

Omega-3 fats are found in both plants and marine animals. However, they are different types of omega-3 and they are not interchangeable.

Plant-based omega-3 fats are found in walnuts, leafy green vegetables, flaxseed, and chia seeds. They contain short-chain alpha-linoleic acid (ALA) and do not have the long-chain docosahexaenoic acid (DHA) and eicosapentaenoic acid (EPA) found in marine animal-based omega-3.

Although the body can use ALA to create EPA and DHA, it requires an enzyme to convert. In most people, the conversion rate is exceptionally small, possibly less than 1 percent. While the small amount of ALA you may eat is converted into the long-chain omega-3 fats your body requires, the process is highly inefficient and cannot supply nearly as much as consuming marine-based omega-3 fats high in DHA and EPA.

It is also important to carefully select your fish since only cold-water fatty fish have high levels of omega-3. Some examples include wild-caught Alaskan salmon, sardines, anchovies, mackerel, and herring. It’s best to avoid farmed fish altogether for three reasons: first, because there’s an exaggerated potential for contamination; second, most farms feed the fish genetically engineered corn and soy; and third, the omega-6 fats fed to these fish are about 90 percent dangerous LA fat.

In other words, consuming these fish does not correct a high omega-6 to omega-3 ratio. In fact, it contributes to it, since farmed salmon have only half the omega-3 of wild salmon and more than 5.5 times the amount of omega-6.

Your Omega-3 Index May Predict Mortality

A deficiency in EPA and DHA can leave you vulnerable to chronic disease. Optimizing your omega-3 levels is a foundational component to good health. However, there is no good way to know your omega-3 level without getting an omega-3 index test.

Your target omega-3 index is 8 percent. This is the typical level of people living in Japan where you’ll find the lowest rate of sudden heart death in the world. The highest risk is in people whose index is 4 percent or lower. At this point, there is no evidence to suggest the measurement is different for men, women, or for different ages.

One study, published in January, evaluated 100 individuals’ omega-3 index and compared them against their COVID-19 outcomes. The primary outcome measurement was death. When the overall data were analyzed, the researchers found only one death in the group with the highest quartile of omega-3 index.

The research data also confirmed past results that demonstrated the average person in the United States has an omega-3 index near 5 percent, which is well below the measurement that has demonstrated protective effects on overall mortality. The data from this group showed an average index of 5.09 percent and a median of 4.75 percent.

One study published in 2018 confirmed omega-3 fat can reduce your risk of cardiovascular disease, coronary heart disease, and all-cause mortality. The researchers measured the omega-3 index in 2,500 participants and found those in the highest quintile had a total mortality 34 percent lower than those in the lowest quintile.

The Many Benefits of Omega-3 Fats

In addition to protecting your heart, lungs, and mitochondria, omega-3 fats have more health benefits, including:

Reducing inflammation. This can be helpful for those with rheumatoid arthritis by reducing stiffness and pain. Women who suffer from menstrual pain may also experience milder pain.

Optimizing muscle growth and bone strength. Omega-3 fats help your body build healthy muscle mass, including in people suffering from cancer who may experience cachexia (muscle wasting). They can also help improve your bone strength by improving the utilization of calcium in your body. This may lead to a reduction in the development of osteoporosis.

Protecting your vision. DHA is a major structural element in your eyes and brain. Low levels of DHA may increase your risk for age-related macular degeneration.

Sufficient omega-3 is also associated with lowered risk for other neurological/cognitive dysfunction as well, including memory loss, brain aging, learning disorders and ADHD, autism, and dyslexia. It may also improve metabolic syndrome, insulin resistance, and reduce your risk of kidney disease and colon cancer.