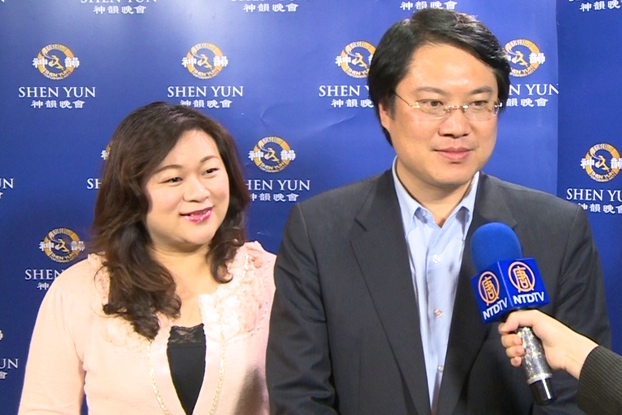 Amazed by Shen Yun’s performance with its mission to revive Chinese traditional culture, Mayor Lin Yu-chang said, “Shen Yun is most cordially welcome to Keelung City. I hope more people in the world are able to see such a wonderful show.

“Every piece of the program is spectacular.”

Shen Yun, a New-York based non-profit company, tours the world, reviving 5,000 years of Chinese culture. Buddhism, Taoism, and Confucianism are at the heart of Chinese culture, explains the company’s website, and the values of traditional Chinese culture are brought to the stage in Shen Yun’s story-based dances.

“I would like to commend Shen Yun for its showcase of Chinese culture, spreading of divine law and portraying of the power of compassion by means of dance,” said

“Its content can let us sense the existence of the power of compassion,” she added. When it comes to the positive values of benevolence, justice, good manners, wisdom and honesty, Legislator Xu said,

“Shen Yun (show) contains many profound connotations, and they can touch our hearts when seeing it.”

“We may not really learn something about righteous thoughts in school and society. But with the connotation of divine law in the show, I feel like being purified by Shen Yun spiritually.

“After seeing Shen Yun show, people at all ages can be inspired,” said Keelung City Councilor Hung Shen-yung, after he attended the Shen Yun performance in Keelung on March 31.

He explained, “Shen Yun can make the audience feel its sincerity.”

“In less than ten minutes each, Shen Yun dances recount ancient myths, bygone heroes, or celestial paradises. Whether set in the past or in contemporary China, every dance embodies traditional Chinese values,” the company’s website states.

“Although every piece is quite brief, it contains very profound messages of compassion, so it can uplift and inspire people to renounce evil and turn to virtue.

“The synchronization of costumes, performance, sound effects and the animated digital backdrops is perfect.” he said.

According to the Shen Yun website, the story lines in the New York-based company’s performances draw upon stories and legends from China’s history and culture.

He further explained, “The program it (Shen Yun) presents every year is different!”

“I’ve never seen such a grand and exquisite performance like this, regardless of whether it is on TV, in movies or in other places. So, it should be the only one in the world.”

Marveling at the animated backdrops, the 78-year-old former mayor said, “The backdrops are very innovative and beautiful. I’ve never seen something like this in any other places.”

According to Shen Yun’s Website, through the universal language of music and dance, Shen Yun weaves a wondrous tapestry of heavenly realms, ancient legends, and modern heroic tales, taking the audience on a journey through 5,000 years of Chinese culture. Its stunning beauty and tremendous energy leave audiences uplifted and inspired.

“In the bottom of my heart, I truly admire those who are behind the scenes, including choreographers, composers, and others who do the research and development. They are really remarkable,” Mayor Lin concluded.