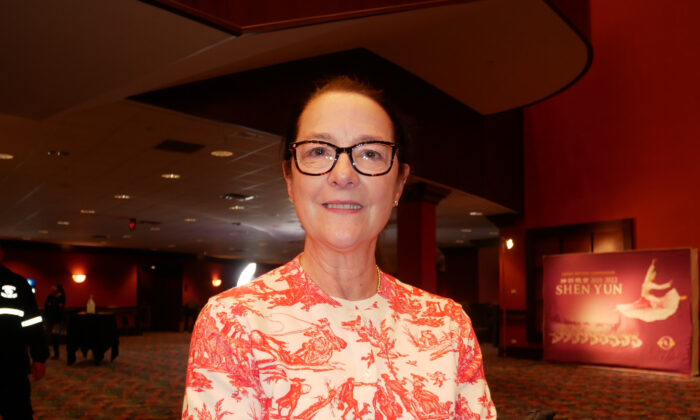 ROSEMONT, Ill.—Shen Yun‘s performances have a unique blend of purpose and beauty that draws audiences. Some come because of the New York-based company’s mission to call to attention the brutal religious persecution taking place in China, and discover an ancient art form; others come for the dance and discover a deep sense of spirituality and tradition.

Amy Grant, a member of the Illinois House of Representatives from the 42nd district, attended the April 30 matinee.

She knew of Falun Dafa and the persecution suffered by its practitioners under the communist regime, a real-life drama that is played out on stage. Shen Yun’s performers follow the teachings of Falun Dafa, the meditation practice based on truthfulness, compassion, and forbearance.

“[Falun Dafa] was crushed down by communist China because the communists felt that was going to be a threat to them. And I don’t like that. My heart goes out to the Chinese people in that regard,” she said.

Through the performance, she learned about the origins of classical Chinese dance, and gained some insight into Chinese history.

“Absolutely unbelievable. Beautiful, athletic, artistic; it was very good,” she said. “I love that they brought the backdrop screen into the performance. I’ve never seen anything like that before, the backdrop being incorporated into the stage.”

Dave Geisler, church president and retired attorney, attended the performance with his wife Shar Geisler. Mrs. Geilser was a piano accompanist for school choirs for 27 years, and an organist for most of her life.

“I thought it was really interesting to put the Eastern and Western instruments together,” she said of the live orchestra. “It sounded great. And the musicians did a very good job.”

Both the Geislers liked the use of Shen Yun’s patented digital backdrop.

“It was marvelous,” said Mr. Geisler. “Especially when they were doing the flowing, flowery, ethereal dance moves, they make great use of their patented screen.”

“I thought that was fun, the way they had the images up in the backdrop and then people would come out onto the stage,” added Mrs. Geisler.

Overall, Shen Yun brought to their mind a sense of the immense scope of China’s culture and history.

“I think that’s a very important part of the show,” said Mr. Geisler. “It’s important to keep in strong touch with the past.”