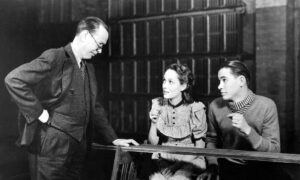 The Antidote to the Theater of Misery: The Natural Theater
0
Share Now
TelegramFacebookTweetEmailTellMeWeReddit
Copy Link 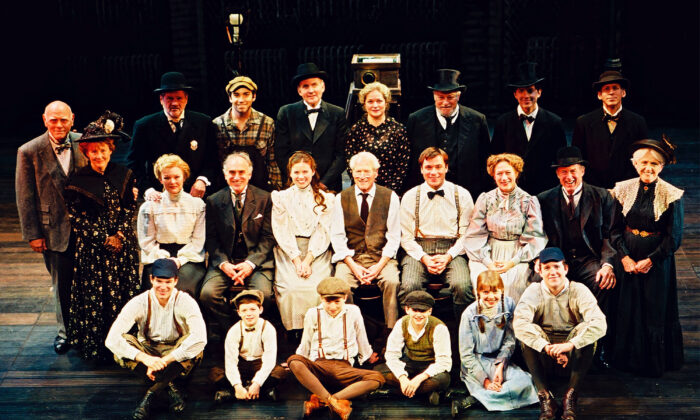 The cast of the 2003 Broadway revival of Thorton Wilder’s “Our Town,” a play that highlights element of Natural Theatre. (Joan Marcus/Getty Images)
Performing Arts

I have previously offered on these pages a description of the Natural Theater and how it is, as my first article asserted, the antidote to the Theater of Misery (where pessimism, hopelessness, and victimology are the human condition). I have also contended that plays from the classical era, such as “Oedipus Rex,” uniquely speak to American audiences because their playwrights understood how characters are irreversibly subject to natural laws and human nature—the “Laws of Nature and of Nature’s God,” as Jefferson wrote in the Declaration of Independence.

However, one does not have to look only in the oeuvre of the classical playwrights or Shakespeare to find examples of the Natural Theater. They are, no doubt, still being written. The trick is to find them among the more prevalent examples of the Theater of Misery being churned out by playwrights with little understanding of our Founding, let alone how to write a play that is meaningful, hopeful, and redemptive.

Playwrights, directors, producers, or simply theater lovers take notice! If you are inspired by the tenets of the Natural Theater, here’s a quick primer on how to spot them in a play. For all intents and purposes, I will be considering serious drama as opposed to comedies. Like Aristotle in the “Poetics” (about which I will have more to say later in this article), I focus on weightier theater, saving lighter fare for future discussions.

The Nature of the Characters

The protagonists of the Natural Theater exist to find meaning—not only find it, but also support it. They do not go through the action of the play unscathed but retain a quiet dignity that both accepts their fate and finds redemption and hope. They are decidedly not victims and, if they are, it is because of the choices they made, not because of the imposition of a hostile world that refuses to acknowledge the character’s intrinsic value.

These characters do not seek solace in meaningless sexual encounters, illegal substances, or raging at the universe. And they do not blame past generations for their failings. If they do, they are made to be seen as foolish, hypocritical, and superficial. In short, the protagonists (dare I say heroes?) of the Natural Theater first look inward to determine the cause of their fate, find meaning in the situations in which they find themselves, and do not seek nor need to cast blame on others.

As one considers the characters in a play, one should ask: Would I want to spend time with them (especially the protagonists)? After examining what a protagonist says and does, ask: Is there a dignity within him or her that transcends the situation, or is there only victimization? Do the protagonists express the idea that positive meaning can be found in their struggle or are they content to live life, as the eponymous and popular musical states, “next to normal”?

Consider, for example, the characters of Thornton Wilder’s “Our Town,” a play I consider an American masterpiece. The inhabitants of Grover’s Corners are decent people, going about their lives with humility and a strong sense of community. Wilder purposely focuses on the everyday—going so far as to have the characters mime their actions such as eating or stringing beans—so that the audience recognizes and finds deep meaning in the elements of a good life that we often take for granted. Yes, there is the town drunk, but he is the exception. And other than expressing pity for his situation, no one makes allowances for his actions. He is not a victim of anything but his own choices and everyone knows it.

Of course, what truly defines the characters of the Natural Theater is their response to the situations in which they find themselves. Therefore, almost any plot can work from a Natural Theater perspective, and any circumstance can be the source of conflict.

The plays of the Natural Theater explore conflict specifically as it is created by flawed human beings, not by external forces over which the characters can only see themselves as innocent victims. However, even this scenario is possible in a Natural Theater play if the protagonist comes to the realization that he or she is at fault (based on their free will and reason—those pesky “Laws of Nature”) and that there is meaning, hope, and possibly even redemption in the struggle. Plots that confirm the beauty and promise of life are the ones the Natural Theater embraces.

I turn again to “Our Town,” where the concerns of the characters—an impending marriage, the loss of loved ones—are precisely those issues that almost all people experience. For example, George must deal with the death of his beloved Emily. He does not rage against the universe or blame God, but rather recognizes death as part of the cycle of life. Of course, he is miserable at Emily’s demise, but one gets the sense that his misery is a reaction to a larger grand plan, about which he cannot control anything but his own reaction.  He cries, we cry, but we all understand.

There are certain situations that should immediately raise suspicions that the Theater of Misery is about to rear its head: plays that take place in a post-apocalyptic world (inexplicably a favorite among amateur playwrights); plays focusing on the failure of the character to find meaningful, lasting relationships; plays that pay undue attention to death; plays that posit that life is absurd (and with that I have relegated an entire genre—the Theater of the Absurd—to be the antithesis of the Natural Theater). Of course, there can be a Natural Theater play in such scenarios, but the chances are greatly reduced if the playwright’s prevailing message is “life isn’t worth it if the protagonist isn’t fulfilled.”

One of the sure ways to spot a Natural Theater play is its frame of reference. Natural Theater plays strive for longevity, providing messages and themes that are not meant to be limited to the contemporary world.  This, of course, parallels the Founders’ quest, stated in the Preamble to the Constitution, to “secure the blessings of liberty” not only for themselves but for “posterity.”

Plays depicting contemporary events with no greater goal than to claim injustice, unfairness, or absurdity without any hope of redemption are not Natural Theater material—nor are plays whose references will be known only to a contemporary audience. “The Book of Mormon” comes to mind. Its numerous allusions to popular culture will not help it stand the test of time.

What the Audience Thinks or Feels

Theater artists seeking a Natural Theater play should give consideration not only to what the audience experiences throughout the action but what it will think or feel once the curtain comes down. At the conclusion of a Natural Theater play, the audience should feel elation—not an unbridled joy—but sincere contentment in knowing that it has witnessed something positive and transformative. This is not unrelated to Aristotle’s “catharsis,” where feelings of terror and pity are “purged.” Indeed, Aristotle’s description of this phenomenon as the “pleasure proper to tragedy” suggests that the overall effect of catharsis is optimistic.

An audience departing the theater with a death wish has seen the Theater of Misery. An audience exiting with a renewed spirit has experienced the Natural Theater.

The call of the Natural Theater should be apparent especially to any American who takes pride in our founding and understands what our Founders set out to create. I truly believe that despite the quality of education these days—where American history is reduced to one paradigm, that of the powerful constantly and sadistically oppressing the powerless—Americans know in their hearts that our nation was formed to elevate human beings, despite their flaws, and to be an improvement on all other governments that have come before.

The Natural Theater simply weaves our founding principles into art, capable of touching those among us with free will, reason, and a love of liberty. That would be all of us, if only we are willing to embrace those principles.

Robert Cooperman is the founder of Stage Right Theatrics, a theater company dedicated to the preservation of the founders’ vision through the arts. Originally from Queens, N.Y., he now lives in Columbus, Ohio, where he earned his doctorate at The Ohio State University.