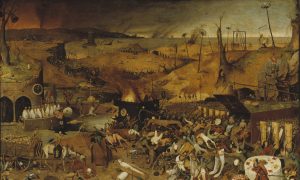 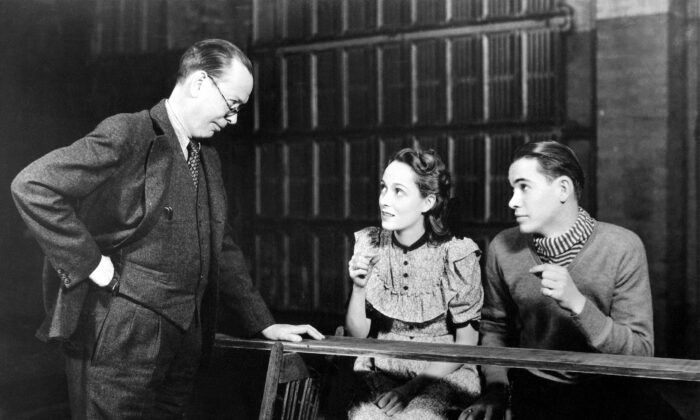 The play "Our Town" captures our shared humanity. A scene from the original Broadway production of “Our Town” with Frank Craven as the Stage Manager, Martha Scott as Emily Webb, and John Craven as George Gibbs. (Public Domain)
Performing Arts

The Antidote to the Theater of Misery: The Natural Theater

Look I know it’s not a perfect show . . . but none of that matters . . . it does what a musical is supposed to do . . . it gives you a little tune to carry in your head . . . A little something to help you escape from the dreary horrors of the real world.

It’s been 15 or so years since these lines were spoken by the “Man in Chair” in “The Drowsy Chaperone.”  Unfortunately, what struck me most upon seeing this otherwise fun and engaging musical were those final lines, particularly the bit about “the dreary horrors of the real world.” Is that true? Do we attend theater not simply to forget about our pedestrian trials and tribulations, but to evade a reality that is just too much to bear? In a world of “dreary horrors,” is there no hope?

For years, we have been told that the world—and especially the United States—is a rotten place, defined by bigotry, hypocrisy, and despair. This cheery view is often reflected in our theater, where miserable malcontents spend precious stage time lamenting their inadequacies and victimization, their failed relationships, and addictions.  About the best we can hope for, according to another inexplicably popular show, is to be “next to normal.”

Despite our being bombarded by this message day in and day out, it does not have to be the prevailing view in this country and certainly not one fostered by the arts.

The Natural Theater takes its cue from the multiple meanings of the word “natural,” starting with its use by our country’s founding generation. We’ve all read (I hope) the Declaration of Independence, which references “the laws of Nature and of Nature’s God.” These laws endow all of us (yes, all of us!) with our natural, unalienable rights: life, liberty, and the pursuit of happiness. This forms the philosophical underpinning of our nation, from which we get the Constitution as well as our unique and unprecedented approach to freedom.

Overall, it is a very positive but not Pollyannish view of life, one where we savor our liberty (after all, we were born with it) but recognize that we will struggle against our own natural tendencies as fallen human beings. As James Madison famously wrote (as Publius) in Federalist 51: “If Men were angels, no government would be necessary.”

So, what has this brief history lesson to do with theater? Simply this: If we accept the idea that we are born free with natural rights, then we should expect this worldview to manifest itself in our cultural outcomes, including the arts.

What we should sense when we watch an American play is the underlying view that the world is not an irredeemably hostile place, but one where the failures of human beings cause a temporary disturbance that the action will sort out when the curtain comes down.

This is not automatically the recipe for a “happy ending,” however. It may be that the play ends with acceptance of the inevitabilities of life, with death a very real consequence. But even in death, something has either been set right or reaffirmed. To put Madison in a theatrical context, “if men were angels, no theater would be necessary.”

The plays of the Natural Theater place the source of adversity either within a society that separates itself from the laws of nature or in the individual who has pursued a course in life that distances him or her from an otherwise well-functioning civilization. The protagonists of the Natural Theater are not defined by their victimization but by their heroic qualities (Oh, to have heroes again!) and capacity for self-reflection.

These characters do not seek refuge by declaring the world either mad or absurd (and thus fall victim to it), but rather by striving to understand why their lonely stance is worth the struggle and what that struggle means in a larger sense for the furthering of the liberty that is natural to humankind.

Where shall we find these plays? The truth is, we’ve had them for centuries. What has made plays such as “Oedipus Rex” and “Hamlet” remain vital and enlightening? Why have we turned our backs on plays about significant people who, for better or worse, command our attention?

Conversely, why do we fail to show an appreciation for the significance of everyday people who live their lives within the structure of an orderly society? Why have we instead tried to force a significance onto characters who are defined by the poor choices they’ve made or their alleged victimization by a hostile society? This type of theater represents an unnatural plane of existence, a world we neither aspire to nor want, where strength of character is eclipsed by the “unfairness” of life’s realities. Surely, this is not the world the Founders envisioned, as they considered the elevation of character to be the glue that holds our republic together.

Consider, for example, Thornton Wilder’s “Our Town.” Why has “Our Town” endured? To be sure, there are no characters of worldly significance in the play. The conflicts in the small town of Grover’s Corners that present themselves throughout the course of the action do not pose an existential threat to the masses (as does the plague in “Oedipus Rex”). And yet, the play examines the humanity shared by everyone—significant or not—who starts the morning with a new life and finishes the day contemplating the inevitability of death.

Grover’s Corners institutions, such as family and the church, help maintain the social order and provide refuge from the hostilities of the world, which are ever present but surmountable. “Our Town” endures because it depicts on stage the brilliance of the American founding—and the accompanying society it creates—without ever waving a flag.

Where We Are Now

The fact is, we have a scarcity of plays that conform to Natural Theater coming from our contemporary playwrights.  Why is that? Part of the reason may be that we have devalued the philosophy of our founding to the point that it is considered—particularly in academic circles—to be merely one choice as a standard of living out of many, and not a particularly instructive one at that.

Another speculation is that the pervasiveness of Hollywood writing, with its reliance on sexual promiscuity, broken relationships, and the elevation of the least essential elements of our society (the criminal, the insane, the addicted, the victim) has raised a generation of writers incapable of embracing essential truths about human nature and who are content to equate violence and misery with deep meaning. Writers of this sort tend to use the theater space as a forum for group agony.

Plays of the Natural Theater use the theater space for collective redemption, life-affirmation, and, above all, the recognition that humanity is blessed, even in its darkest moments.

Now perhaps more than ever, we need a return to Natural Theater, and I call on first our playwrights to seek higher ground. Our country cannot continue to thrive with art that debases it or seeks unity in misery. Instead, we should celebrate the world that our Founders set in motion, which is our one sure path to achieve true liberty in the natural sense of the word.

Robert Cooperman is the founder of Stage Right Theatrics, a theater company dedicated to the preservation of the founder’s vision through the arts. Originally from Queens, New York, he now lives in Columbus, Ohio, where he earned his doctorate at The Ohio State University.