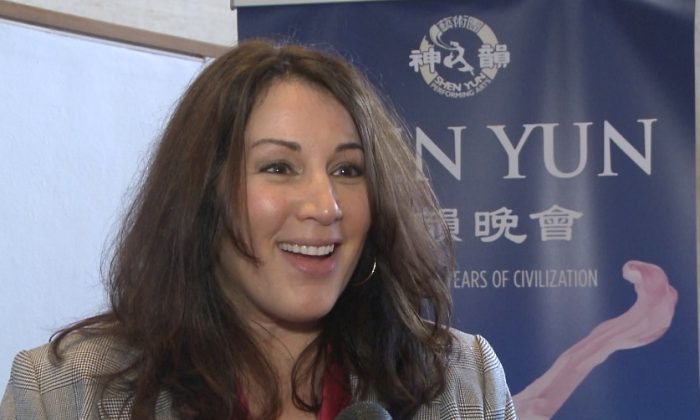 HOUSTON—Margie and Richard DiGiacomo brought the whole family to see the penultimate Shen Yun Performing Arts performance of the season in Houston as a holiday gift at the Jones Hall for the Performing Arts on Dec. 31.

“I think it’s wonderful and I think it’s great they could come to Houston,” said Mrs. DiGiacomo, finance director for Hewlett-Packard.

Mr. DiGiacomo, who works in procurement for Hewlett-Packard, agreed and said he wished one day Shen Yun would be able to perform in China as well.

New York-based Shen Yun’s mission is to revive 5,000 years of Chinese civilization through the performing arts, and for eight years has been touring internationally. However, China is the one place they cannot perform, as the emcees explained.

Under the current regime in China, traditional values like benevolence and respect for the heavens, which are present in the arts, were once almost destroyed.

Mrs. DiGiacomo said, being Christian, she saw a lot of similarities to the traditional Chinese culture, which is deeply spiritual and said to be inspired by the heavens.

“We see a lot of similarities to the beliefs of kindness and compassion, and that was wonderful to see in the arts,” Mrs. DiGiacomo said.

Mrs. DiGiacomo was delighted to see different arts in the performance, such as classical Chinese dance. She noted the dances with all male dancers were forceful and energetic, different from the female dancers.

The costumes were a high point for her as well. “The clothing, the way it flows is just beautiful,” Mrs. DiGiacomo said. Shen Yun produces hundreds of costume pieces for every performance, which aim to give the audience a sense of authentic traditional Chinese attire, said to be inspired by the heavens.

“I thought it was charming,” Mrs. DiGiacomo said of the family event. “Quite exuberant.”