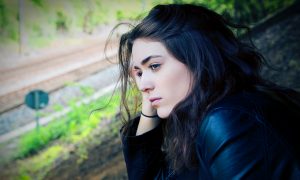 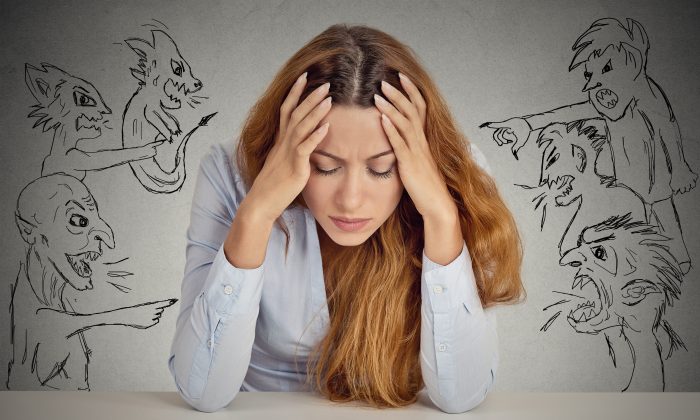 Humans are prone to negative thoughts. Learning how to deal with this is critical to our well being. (ESB Professional/Shutterstock)
Mind & Body

How to Live Peacefully With Negative Thoughts

Do you have repetitive negative thoughts? If so, the diagnosis is confirmed: You’re human.

The average person experiences 60,000 to 70,000 thoughts per day, according to the Laboratory of Neuro Imaging at the University of Southern California. As a psychotherapist, I can say with certainty that a large percentage of those thoughts are about what can go wrong, what will go wrong, what we’ve done wrong, and what others are doing wrong.

What makes negative repetitive thoughts so challenging is that they often stem from core self-beliefs like “I’m not good enough,” “I won’t get what I want,” or “The world is not trustworthy.” Because they’re built out of these deeply held beliefs, repetitive thought loops are very powerful and sticky. We believe them—as if their persistence is somehow evidence of their truth. As a result, we are compelled to engage with their content.

Repetitive negative thoughts are part of the human journey; we cannot stop them. We can, however, stop trying to change the unchangeable.

We should learn early in life that we need to do something about our negative thoughts: Prove them wrong, convince ourselves that they’re false, or actively replace them with positive thoughts. In any case, we need to put up a fight.

There is nothing inherently wrong with these strategies. Arguing with and disproving negative thoughts is sometimes helpful, as is actively replacing them with positive thoughts. But the most effective approach that I have found for repetitive negative thoughts is actually the least intuitive. It looks something like this: Stop trying to change negative thoughts; don’t do anything with or about them; stop fighting what’s already happening; and look elsewhere.

How can we be okay when what’s happening in our minds is not okay? We may assume that by agreeing to not change our negative thoughts, we are also agreeing to believe them—to invest them with meaning. But what if that weren’t true?

What if negative thoughts could appear in your inner world, and you could comprehend their content but not have to do anything about them—not have to make them go away, invest energy in them, get involved in their stories, or even believe them? What if the negative thoughts could mean nothing about who you are? Before we can practice this approach, however, we need to believe it’s possible.

We are a culture of doers, and for some, the instruction to not do can feel like not enough. It can be helpful, therefore, to reframe the “not doing” as something more proactive. Specifically, instead of focusing on not changing your thoughts, practice turning your attention away from the thoughts themselves toward what is behind them.

As soon as negative thoughts appear, we tend to narrow our attention onto them with laser beam focus, thereby blocking out anything else that might exist in our awareness. And yet, what if we were to look beyond them and contemplate what else is there? What is behind and under the thoughts? In so doing, we leave the thoughts alone and direct our attention to the spaciousness around them. It’s like shifting our attention from the birds to the sky.

An important aspect of this practice is not judging the fact that we have negative thoughts in the first place. In truth, thoughts happen with or without our consent. The fact that negative thoughts come back again and again is a byproduct of our mind’s operating system. It is not a failing on our part; it does not make us less spiritual, or especially troubled. The sooner we can accept this truth, the sooner we can get on with the business of living.

Turning Down the Volume

Try it out for a day or an hour: Don’t change your thoughts, no matter what they contain—just leave them alone, let them happen. Turn your attention away from the thoughts and toward the one who’s listening—your own awareness and presence. Sense the space in which the thoughts are appearing, the silence behind the noise, and the stillness under the movement.

When we shift our attention in this way, something very curious happens: The thoughts start losing their power. They may still be there, but they contain less “oomph.” The volume of the thoughts shifts from a shout to a whisper. Sometimes, as the thoughts become less enticing and fail to move or engage us, they start to fade altogether. And yet sometimes they don’t fade. While we would prefer that the negative thoughts subside rather than continue, neither is evidence of the success or failure of our process.

Repetitive negative thoughts are part of the human journey; we cannot stop them. We can, however, stop trying to change the unchangeable. What matters is how we relate to the thoughts and ourselves. We generate internal peace when we give up the fight with the inevitable and direct our attention toward new frontiers. Ultimately, the relationship we build with our thoughts, and the agency we take with our attention, is what creates our experience.

Nancy Colier is a psychotherapist, an interfaith minister, and the author of the book “The Power of Off: The Mindful Way to Stay Sane in a Virtual World.” For more information, visit her website NancyColier.com