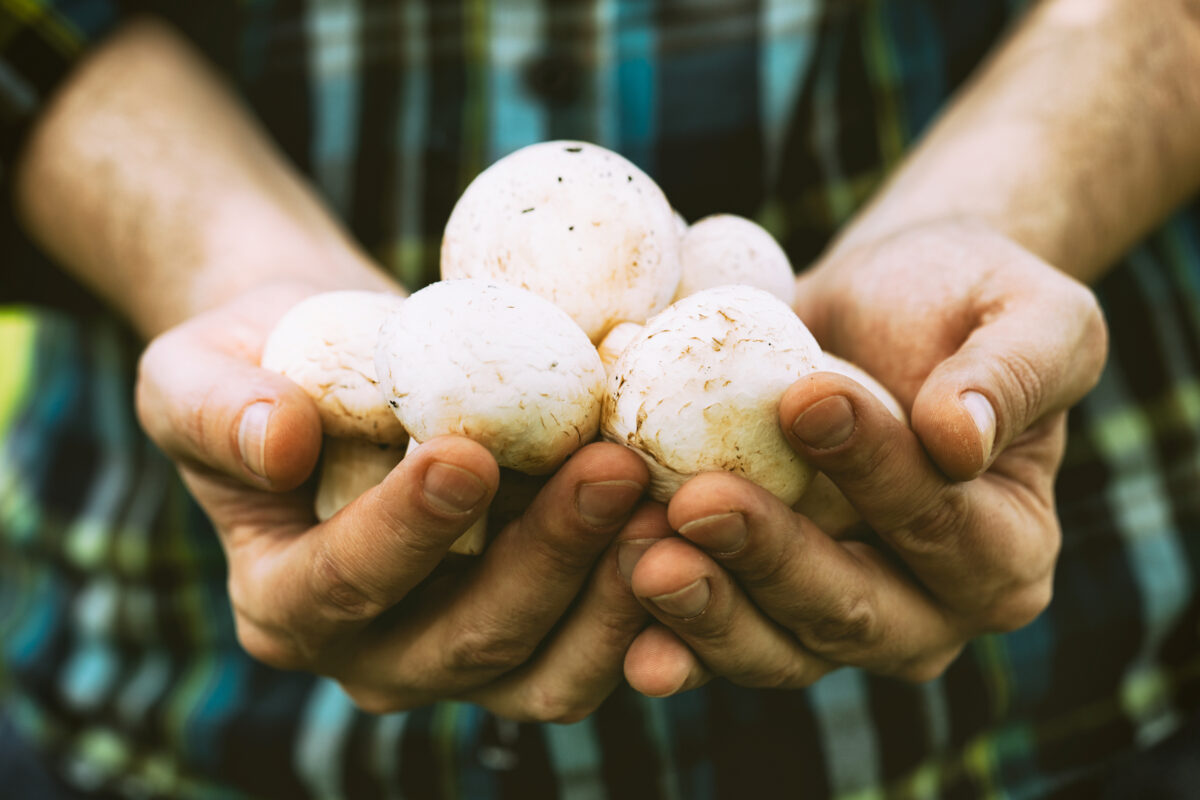 How Mushrooms Help Protect Your Brain

Mild cognitive impairment can have a significant impact on your quality of life and may increase your risk of dementia. Mushrooms may be a simple way of protecting your brain and reducing your risk.

Mild cognitive impairment (MCI) can have a significant impact on your life and your ability to live independently if the condition progresses to dementia. One step you can take to help protect your brain is eating mushrooms.

MCI is a slight decline in cognitive ability that increases the risk of developing dementia, including Alzheimer’s disease, although it is not a guarantee. According to the Alzheimer’s Association,[1] up to 18% of people aged 60 or older are living with mild cognitive impairment. Additionally, up to 15% of those people will develop dementia within one year.

Everyone has a forgetful moment occasionally. Simply misplacing your keys once in a while is not cause for alarm. However, forgetting important events or information that you would normally have remembered, such as conversations or appointments, may be a sign of MCI.

Individuals with MCI also have a more difficult time making sound decisions or figuring out the sequence of steps needed to complete a task. According to the Alzheimer’s Association,[2] two types of MCI are classified based on the thinking skills affected by the condition. Amnestic MCI primarily affects memory while nonamnestic MCI primarily affects thinking skills unrelated to memory.

If you have been diagnosed with MCI, be aware that some cases do not progress, and studies have found that some people even improve.[3] Incorporating regular exercise, proper diet and engaging in mentally and socially stimulating activities can help boost your brainpower. And, as research has also shown, eating mushrooms may help prevent MCI.

The structure and function of the brain change during aging, but this normally does not lead to MCI. There are several strategies you could use to protect your cognitive function, and one of those may be eating mushrooms. Mushrooms have been used in traditional medicine for decades. But it wasn’t until 1970 that mushrooms were officially distinguished from flora and recognized in their own biological kingdom.[4]

Those who study fungi believe they are closer in nature to animals than they are to plants. According to the U.S. Department of Agriculture,[5] on average, people eat about 3 pounds of fresh mushrooms every year. Mushrooms are rich in several nutrients that are important to human health, among them, ergothioneine.

Ergothioneine is a strong antioxidant that is absorbed from the gastrointestinal tract and distributed throughout the body. One animal study[6] found that repeated administration of ergothioneine had antidepressant effects in mice and using the extract enhanced the memory function in humans and mice. Another animal study[7] published in 2018 found an accumulation in the brain of one of ergothioneine metabolites.

Earlier research[8] with Norwegian participants aged 70 to 74 years has shown that a higher intake of mushrooms can improve cognitive performance. Another epidemiological study[9] of Japanese participants aged 65 and older found those who ate mushrooms at least three times a week was “significantly associated with a lower risk of incident dementia, even after adjustment for possible confounding factors.”

Another study[10] from Singapore gathered data from 663 participants aged 60 and older and compared those who ate mushrooms less than once a week against those who ate more than two portions per week. They found those who ate the most mushrooms had a 50% lower risk of developing MCI,[11] which was independent of confounding factors that included cigarette smoking, alcohol consumption and high blood pressure.

Levels of ergothioneine are significantly reduced in people who have MCI over the age of 60. The researchers concluded,[12] “This decrease in blood ET [ergothioneine] may indicate that low ET is a risk factor for neurodegeneration in the elderly.” If low levels are reversed, it may explain how some people diagnosed with MCI may appear to recover cognitive function.

A study[13] published in 2022 in the journal Neurology followed 2,903 cognitively normal participants at enrollment over an average of 6.3 years. During that time 752 developed MCI. They found people with more years of education, higher income or more leisure activities had a reduced risk. After an average of 2.4 years of follow-up, they found 47.9% of those people with MCI no longer met the criteria.

Mushrooms have a high nutrient content, providing essential minerals such as manganese, copper, zinc, selenium, magnesium and iron.[14] They are also high in potassium and sulfur, as well as many of the B vitamins.[15]

Mushroom varieties also have antioxidants that other fungi plants do not have, such as ergothioneine and glutathione,[16] also called the “master antioxidant.”[17] As noted in The Guardian:[18]

“… [S]cientists think [ergothioneine and glutathione] may help to protect the body against the maladies of old age, such as cancer, coronary heart disease, and Alzheimer’s disease.”

In a press release following the publication of a paper in Food Chemistry, Robert Beelman, Professor Emeritus of food science and director of the Penn State Center for Plant and Mushroom Products for Health, said:[19]

“What we found is that, without a doubt, mushrooms are the highest dietary source of these two antioxidants [ergothioneine and glutathione] taken together, and that some types are really packed with both of them.

There’s a theory — the free radical theory of aging — that’s been around for a long time that says when we oxidize our food to produce energy there’s a number of free radicals that are produced that are side products of that action and many of these are quite toxic.

The body has mechanisms to control most of them, including ergothioneine and glutathione, but eventually enough accrue to cause damage, which has been associated with many of the diseases of aging, like cancer, coronary heart disease and Alzheimer’s.”

“Now, whether that’s just a correlation or causative, we don’t know. But, it’s something to look into, especially because the difference between the countries with low rates of neurodegenerative diseases is about 3 milligrams per day, which is about five button mushrooms each day.”

Two Mushrooms a Day May Lower Your Risk of Cancer

In addition to lowering your risk of neurodegenerative diseases, mushrooms may also help protect you from cancer. Researchers from Pennsylvania State University performed a literature review and meta-analysis[21] to assess the association between the risk of any type of cancer and mushroom intake.

An evaluation of research from January 1, 1966, to October 31, 2020, yielded 17 studies that met the inclusion criteria. Analyses of data from more than 19,500 cancer patients[22] showed that those who consumed the most mushrooms had the lowest risk of any type of cancer. They also found a specific link between high mushroom intake and low risk of breast cancer.

The researchers wrote this may be “due to the small number of studies which examined associations of mushroom intake with other site-specific cancers.”[23] They reported in a press release[24] that those who ate 18 grams of mushrooms, or about one-eighth to one-fourth cup, daily had a 45% reduced risk of cancer.

Legend has it that the founder of the Rodale Institute and promoter of organic farming once wrote “Healthy Soil = Healthy Food = Healthy People”[25] on a chalkboard. Although the concept is logical, scientists had not made an evidentiary connection until recently.

A study[26] in Environmental Science, published January 27, 2022, revealed the results of measurements across eight pairs of regenerative and conventional farms in eight states in the U.S. Each regenerative farm was paired with a neighboring conventional farm that planted the same crop variety.

He and his colleagues hypothesized that ergothioneine from mushrooms was being absorbed into the crops through underground association with mycelium, fungal threads that exist below the surface of the soil. When animals eat plants rich in ergothioneine, it gets into the meat.

Beelman hypothesized that this may be how the antioxidant is found throughout the human population. They collaborated with the Rodale Institute to measure levels of ergothioneine in oats and separated the crops based on how intensely the soil had been tilled.[29] The data showed oats grown on conventionally tilled land had one-third less than those grown on no-till land.

Beelman believes that this demonstrates a cohesive link from soil to crop to human health. “When you till the soil, you reduce the amount of ergothioneine that gets into the crop. Nobody had actually shown a specific connection. I think this does,” he said.[30]

A chemical analysis[31] of mushrooms by the University of Illinois in Champaign, Illinois, revealed mushrooms are also rich in beta-glucans. The analysis showed portobello mushrooms had nearly double the amount of most other mushrooms. Beta-glucans are a naturally occurring polysaccharide that are known to play a beneficial role in high blood pressure, obesity and insulin resistance.[32]

Past research has also demonstrated that beta-glucans play a role in the prevention of viral infections, such as the common cold and flu. For example:

In addition to helping combat viral illnesses, beta-glucans also improve the microbial diversity in the gut by acting like a prebiotic. In one study,[37] beta-glucans improved the growth rate of Lactobacillus plantarum in the gut in both unstressed and stressed conditions.

It was also able to protect the probiotics from gastrointestinal stress caused from lower pH, bile salts and digestive enzymes. This may increase the survival rate of probiotics as they travel through the digestive system. Beta-glucans is available in supplement form, but it is best to get it from whole food sources such as mushrooms, baker’s yeast or seaweed.[38]

Choose Organic or Grow Your Own

I highly recommend adding mushrooms to your diet as they’re an excellent addition to any salad and go great with all kinds of grass fed meat and wild-caught fish. However, it is crucial you choose organically grown mushrooms as fungi easily absorb air and soil contaminants.

Growing your own mushrooms is an excellent option and likely a far safer alternative than foraging for wild mushrooms. Although foraging may sound like fun, there are no simple rules to distinguishing between toxic and edible mushrooms. According to Medscape, in more than 95% of cases[39] where toxicity was reported, amateur mushroom hunters have misidentified poisonous mushrooms.

The severity of poisoning can vary, but the most toxic comes from mushrooms in the Amanita family.[40] There’s no antidote for amatoxin poisoning, so it’s essential if you have any reason to suspect someone has ingested an amatoxin-containing mushroom, you do not wait for symptoms but immediately seek emergency treatment.

Some medications may help lessen the severity,[41] but they are not always successful. The most famous of the Amanita mushroom is the lethal death cap mushroom,[42] which may kill more people each year than any other type of mushroom.