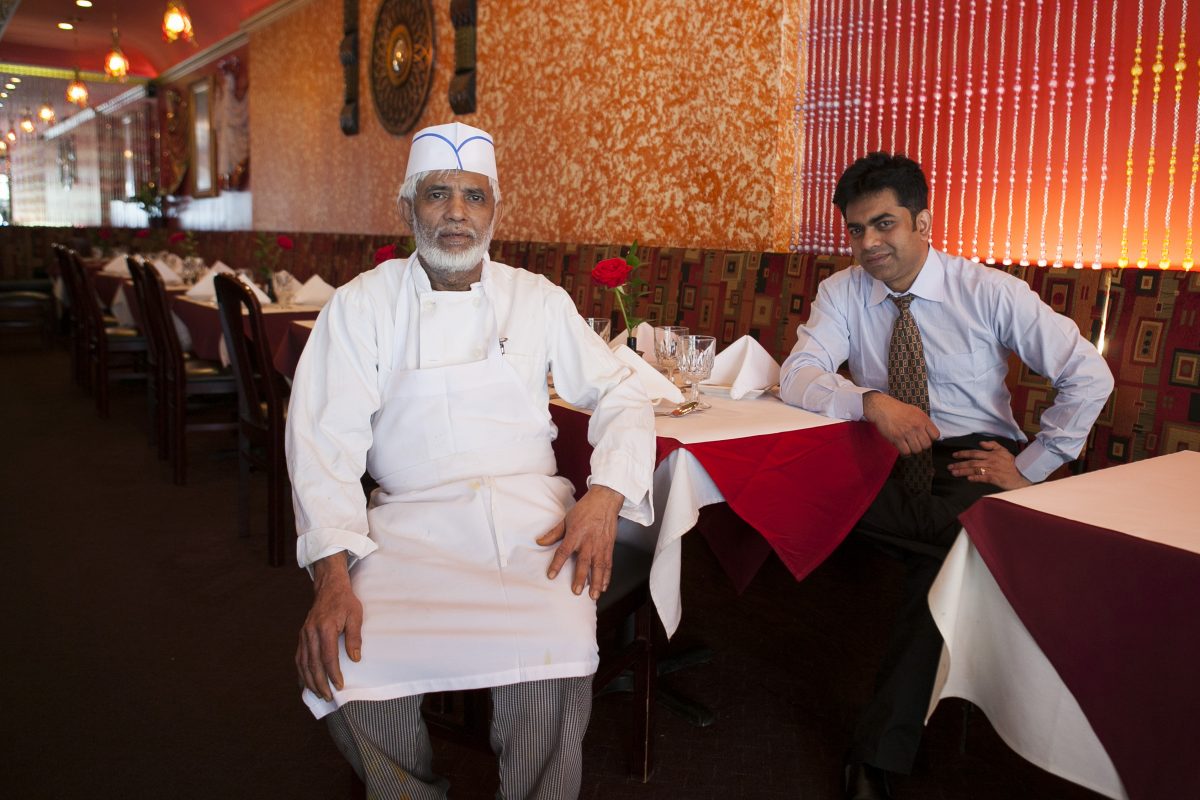 Heart of India: Jewels of the Tandoor

Chef Jamal Jewel plunges his hand into the tandoor. At the bottom, the charcoal glows bright red. The temperatures in the metal oven reach up to 900 degrees Fahrenheit. With nothing but a small cloth, Jewel rescues a brass pot filled with biryani rice. It has been steaming slowly and quietly, sealed by a lid made of dough, which is waiting to be opened to release the dish’s aromas.

Tandoors, which were originally made of clay, yield succulent grilled meats too, usually made tender by long marinating that results in mighty tempting aromas. As the meat cooks, the fat and juices drip down on the charcoal, smoking it in the process.

Heart of India, in the East Village, makes plentiful use of its tandoor oven, but there’s another tool at the back of the kitchen that holds the secret to its flavorful dishes: a spice grinder—and a huge one at that, of the industrial-strength type. When it’s cranked on, the whirring starts, and two large stone wheels turn and crush the spices.

Of course it would be faster and far easier to buy pre-ground spices, but toasting and grinding the spices daily makes for the most vibrant, brightest flavors possible.

The tandoori specialties are a nice way of enjoying the freshness of the spices as well as the tandoor preparation—the chicken tandoori for example, is tender, and while the spices are mild, there is a slow, pleasant heat that sneaks in only toward the end of a bite. Just as delicious was the chicken tikka ($11.95).

We tried a number of dishes at Heart of India, but the one my dining companions kept going back to was the chicken tikka masala. One of them even had a slight moment of anxiety (if I can call it that), as we were about to run out of rice—how else were we going to mop up the delicious sauce? It was faintly sweeter and creamier than other chicken tikka masalas I’ve had, which likely contributed to its addictive qualities, especially for American palates.

Another very popular dish is the chicken korma ($13.95). The sauce is creamy as expected, made with coconuts, raisins, and almonds—and this was definitely sweeter than I expected.

A family of about 12 sat not too far from us, and fell nearly completely silent as they started eating. Family style is really the best way to sample different dishes. Thoughtfully there are mixed plates such as the tandoori mixed grill, and there’s also a plate of mixed vegetable appetizers. For $7.95, it’s a great deal for different tidbits: cauliflower pakora (or fritters), which had a mild nutty taste, an unusual and light banana pakora, potato and eggplant pakoras, and a samosa.

I normally never order a samosa for an appetizer, because it’s usually not fried well and makes me feel like I have a dead weight in my stomach. But this vegetable samosa lightened the load. The crabmeat samosa is also quite light and an unexpected item ($4.95).

I also had the lamb biryani, which is cooked in the tandoor oven. When you break into the lid made of dough, a mound of fragrant rice, tender lamb, and spices greets you. [$13.95) The flavors are delicate and subtle, and it makes for a very comforting dish at the same time.

Overall the offerings are light, and eating here is an olfactory experience as much as anything else: the presentation is colorful, the fragrance of the spices gently awakens your appetite, and the dishes themselves are most enjoyable.