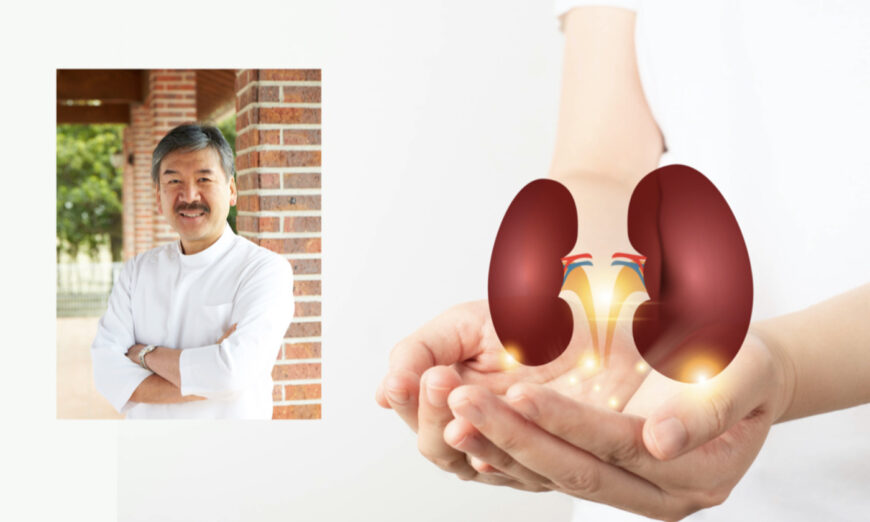 Takashi Funato,(L), director of the Funato Clinic in Gifu Prefecture, Japan, suffered from kidney cancer 15 years ago, and after surgery, the cancer has not relapsed. He introduced his five cancer-fighting lifestyles, including eating healthy food without additives. (Shutterstock/The Epoch Times)

Cancer is the kind of disease that strikes fear at its mere mention, much less a definite diagnosis. However, when Japanese doctor Takashi Funato was diagnosed with cancer, he began to reflect on his life.

After changing his lifestyle, he has not had a relapse for 15 years after the surgery.

Funato, director of the Funato Clinic in Gifu Prefecture, Japan, was diagnosed with kidney cancer in 2007. After his surgery, he began to reflect on his living habits. He classified his lifestyle changes into five categories: diet, sleep, exercise, body temperature, and laughter.

Then he realized that his life had already gone wrong.

Takashi said that before he got cancer, his diet was very unhealthy. He often used instant noodles to satisfy his stomach, and he had no restrictions on fast food and snacks. He considers his biggest mistakes in diet were “not caring about the diet” and “thinking that I will not get cancer.”

After the surgery, Takashi said he made an important change: to restrict the ingredient of “the sugar that cancer likes.”

Cancer Cells Can Be Starved to Death, Here’s How

He changed his chaotic eating habits, ate more local, seasonal foods, ate until he was 80 percent full rather than completely full, ate less red meat, ate food without additives and no or fewer pesticides, ate his meals according to a more regular schedule, and fasted appropriately.

Takashi believes that sleeping is one of the important keys to treating cancer. When he was a surgeon and on call at the hospital at any time of day, and his sleep was quite unstable. As a hospital surgeon, this practice was fairly common.

Therefore he took his poor sleep habits for granted, and he did not realize how bad it was.

However, sleeping is a natural healing power.

The lymphocytes that eliminate cancer cells are mainly innervated by the parasympathetic nerves, which dominate at night.

How to Boost Your Immunity While You Sleep

If one’s sleeping time is short, the activity time of the parasympathetic nerve is short, and the time for lymphocytes to eliminate cancer cells will also be shortened.

Therefore, Takashi recommends that cancer patients go to bed at 10 p.m, get up at 6 a.m., sleep for at least six hours, and never go to bed later than midnight.

Takashi walked at least 3,000 steps every day after his surgery. He parks his car farther away when he has the consultation with the patients and then walks to the destination.

He recommends that cancer patients walk as much as possible and exercise their muscles.

Beyond Diet: 10 Minutes of This Helps Heal the Gut

In addition, exercise can make the body get more oxygen and inhibit the growth of cancer cells. Exercise can also make muscles consume sugar, reducing the supply of nutrients to cancer cells. Therefore exercise can be described as killing three birds with one stone.

He advises patients to take baths frequently, which he does once or twice a week. He also pays attention to keeping his body warm, especially in winter, and especially keeping his abdomen and lower body warm.

He pointed out that elevated body temperature increases the activity of immune cells and also increases the number of Heat Shock Proteins in cells, which function as repairing the cells.

Takashi also advises cancer patients to laugh more in order to stay happy. Even if you cannot smile naturally, you should smile intentionally. Try to take a deep breath and smile; you will feel more relaxed in your heart.

Taken as a daily tip, this can become a key technique to reduce negative stress.

77 Things You Can Do to Boost up Your Immunity