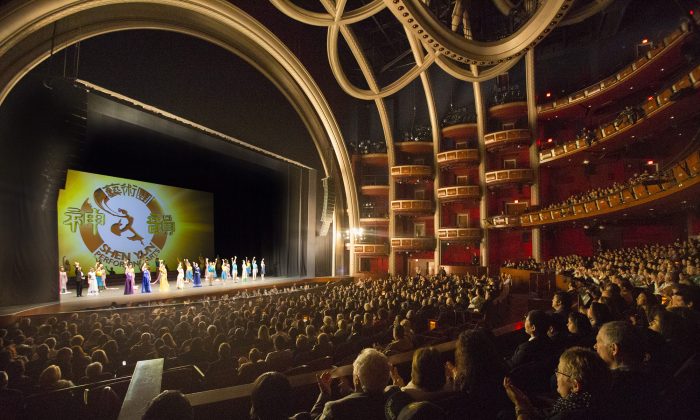 Since its founding in 2006, Shen Yun has quickly become the world’s premiere classical Chinese dance and music performing arts company. Based in New York, the company creates an entirely new production every year, featuring the world’s top dancers, a full orchestra combining eastern and western instruments. and a unique interactive backdrop.

This animated background was especially impressive to Mr. Chamberlain, who said it was amazing watching the dancers appear to leap into the backdrop and fly into the air or dive into the sea.

“I thought that was really fun,” he said. “I was wondering how they managed that kind of projection. It’s very, very interesting.”

Although China was once known as Shen Zhou—The Divine Land, traditional Chinese values were nearly destroyed by communist rule.

Shen Yun has taken on the mission of reviving the true, divinely inspired Chinese culture and sharing it with the world. It has become a global phenomenon, touching the hearts of millions.

However, this treasure cannot be seen in China today, which shocks audiences around the world.

“I was surprised that this particular show is not seen in China,” said Chamberlain. “That surprised me.”

Richard Chamberlain began his career as a popular television actor in the 1960s and went on to star in movies and sing in staged musicals. He received Golden Globe awards and Emmy nominations for his work on television miniseries Shogun in 1980 and Thorn Birds in 1983.

Ms. Ruddy, who has been to Hong Kong and Singapore, expressed that this performance is a good way to get more insight into the Chinese culture.

“They talk about what life is really for Chinese living in China versus outside of China, and the fight to keep traditions alive—things that are oppressed in China,” said Ms. Ruddy. “Really, you watch this and you think, what a tragedy it would be if we lost it!”

Through story-based classical Chinese dance and ethnic and folk dance, the company breathes new life into ancient myths and legends. It also deals with modern-day human rights abuses in China and the peaceful resistance of the Chinese people.

Ms. Ruddy explained, “To someone born here, you think of China as very similar, and you forget the country is so vast, so many different people, and cultures within the larger Chinese culture. And so it is eye opening to the distinctions.”

The fight for the Chinese to keep their traditions and dignity is what touched her most deeply, said Ms. Ruddy, explaining that in her work, among the many goals in her field, is to fight for the dignity of the patients.