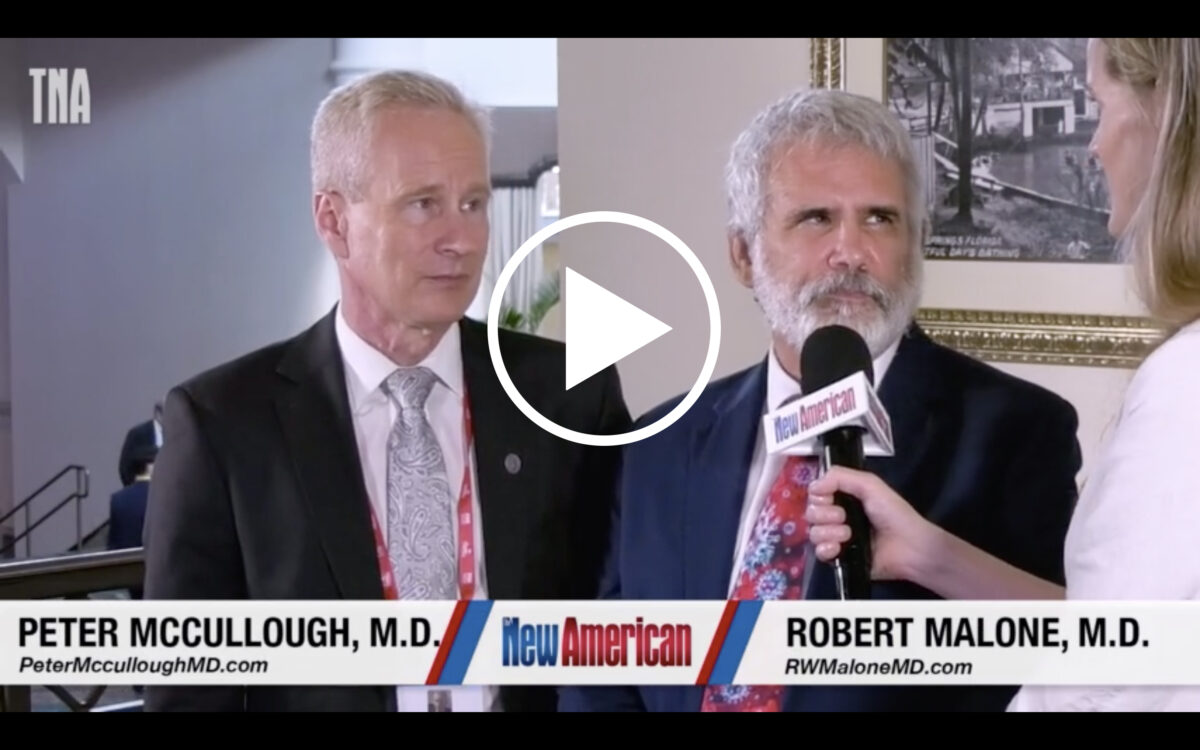 Get Politics Out of Health Care

The COVID-19 pandemic has been heavily politicized, such that Americans’ health and medical freedom are at risk. From data suppression to scientific fraud, two experts speak out on the problems that occur when government controls health care.

Medical freedom is a right that must be protected for all; it transcends politics and applies to people regardless of political party. Speaking with The New American at the Conservative Political Action Committee (CPAC) conference in Orlando, Florida, Dr. Robert Malone, the inventor of the mRNA and DNA vaccine core platform technology, and Dr. Peter McCullough, cardiologist, internist and epidemiologist, called for politics to get out of the health care arena.

“This disease has been politicized, and it shouldn’t have been,” Malone said, referring to COVID-19. The government controlling health care is a core problem, Malone says, as politicians have stepped in to dictate patient care. “Frankly, Tony Fauci is a politician at this point,” Malone added, explaining that politicians are now mandating health care through a “menu-driven system,” which doesn’t allow physicians like McCullough to practice medicine and save patients’ lives.

“They’re trying to implement a strategy, which is a top-down one, that’s favored by insurance companies, that’s favored by Big Pharma, favored by big hospital chains, but is absolutely not the kind of medical care that the American people want,” Malone explained.

McCullough, who was once a full professor of medicine at Texas A&M College of Medicine in Dallas and the editor of two medical journals who has published 650 peer-reviewed papers, has been vocal throughout the pandemic about the importance of early treatment. This is the first time in his career when he saw medical providers not offering early treatment for a disease.

It typically takes two to three weeks for someone with COVID-19 to get sick enough to be hospitalized, and during that time early treatment can be lifesaving. However, during the pandemic, treatment was largely withheld until a person was hospitalized.

The rationale was that there have been no large, randomized trials conducted to know which treatments are safe and effective but, as McCullough said, “We can’t wait for large randomized trials … Something got in the minds of doctors and nurses and everyone to not treat COVID-19. I couldn’t stand it.” He and colleagues worked feverishly to figure out a treatment — why didn’t national health organizations do so also?

“Our government and other governments, and the entire world, has not lifted a finger to reduce the risk of hospitalization and death anywhere,” McCullough said, pointing out the irony: “If there was a kid with asthma, would we let the kid wheeze and choke for two weeks before the kid has to go to the hospital? No, we give the child medications. We don’t have randomized trials for every single thing that we do.”

While some physician organizations have stepped up and are treating COVID-19 patients, “The ivory tower today still is not treating patients. The party line in my health system is, do not treat a COVID-19 patient as an outpatient. Wait for them to get sick enough to be admitted because my health system … follows the National Institutes of Health or the follows the Center for Disease Control, period.”

An exposé by The New York Times revealed in February 2022 that the U.S. Centers for Disease Control and Prevention hasn’t published most of the data it’s been collecting during the pandemic. Data such as U.S. hospitalizations for COVID-19 according to age, race and injection status are among the statistics that the CDC has been hiding from the American public.

And while the CDC published data on COVID-19 boosters’ effectiveness in adults under 65, it didn’t include data for 18- to 49-year-olds, “the group least likely to benefit from extra shots.”

According to CDC spokeswoman Kristen Nordlund, the CDC hasn’t released all of the data “because basically, at the end of the day, it’s not yet ready for prime time.”6 But, The New York Times reported, “Another reason is fear that the information might be misinterpreted, Ms. Nordlund said.”

In reality, had the data revealed what the CDC wanted, it would have been released. In their official reasoning, however, Nordlund said that the data represent only 10% of the U.S. population, using that as an argument for why they didn’t release it. “But the CDC has relied on the same level of sampling to track influenza for years,” according to The New York Times. Further, it noted:

“[T]he C.D.C. has been routinely collecting information since the Covid vaccines were first rolled out last year, according to a federal official familiar with the effort. The agency has been reluctant to make those figures public, the official said, because they might be misinterpreted as the vaccines being ineffective.”

Misinterpreted? “Let’s be clear,” Steve Kirsch, executive director of the Vaccine Safety Research Foundation, wrote. “The only way the vaccine data could be interpreted as ineffective by us ‘misinformation spreaders’ is if the data shows the vaccines don’t work … The truth is the data didn’t support their narrative so they hid it.

Do you think they would hide the data if it showed the vaccines worked? Of course not! … CDC admits it withheld data from the public because they didn’t want to create vaccine hesitancy.”

The CDC, he says, has become more of a political arm and is not serving its intended function of providing frontline data. “They’ve become purely a political organization and arm of the executive branch, and what they have done is, in my opinion, obscene,” Malone said.

The CDC’s politicization and dereliction in their duties underlies the attacks that Malone and McCullough have sustained, as anything that doesn’t have the CDC’s mark of approval is deemed misinformation. “But now we’ve learned who’s really been spreading medical misinformation is the CDC,” Malone said. “I think we’re all owed an apology.”

The CDC’s refusal to publish pertinent pandemic data is only one example of a lack of transparency that’s put Americans’ health at risk. “The most important data that the CDC holds is on vaccine safety,” McCullough says.

“They have millions of reports. So they have a lot of data to go over and they owe America an explanation on safety. There is a prevailing view, in the CDC and in the FDA, they’re the official sponsors of the U.S. vaccine program, and the prevailing view is that the vaccine will not be effective until everybody takes it — and not just once but in a repetitive, serial fashion. And I can tell you that prevailing view, in my personal estimation, is flawed.”

Other areas of concern on data transparency include the FDA and Pfizer attempting to hide clinical trial data for 75 years. “When I saw that, that’s when I got very vocal and said fraud has occurred. How do I know that? They won’t show us the clinical data,” former Blackrock portfolio manager Edward Dowd said. This should be a red flag for all Americans. McCullough said:

“The FDA and Pfizer are being sued for release of their full dossier. Many of you know that there now is an accelerated release of the data, but the reluctance to release information on a biological product that each and every American is being asked, if not mandated, to take, the reluctance to do so should make everyone concerned.”

“The other area of data transparency we’re extremely concerned about is the Department of Defense epidemiological database information … it’s clear there is a manyfold increase across many disease categories among our servicemen year over year. The only thing that’s changed is the administration of the vaccines in large numbers.”

We’re now at a crossroads, and many experts believe it’s only a matter of time before the criminals behind this scheme are held accountable. “Data transparency at this point in time will be an area that … will be intensively investigated, and for those who are close to the data, I think they do have a choice coming up,” McCullough said. “And it’s going to be a matter of them making the right choice of where they want to end up — on what side of history.”