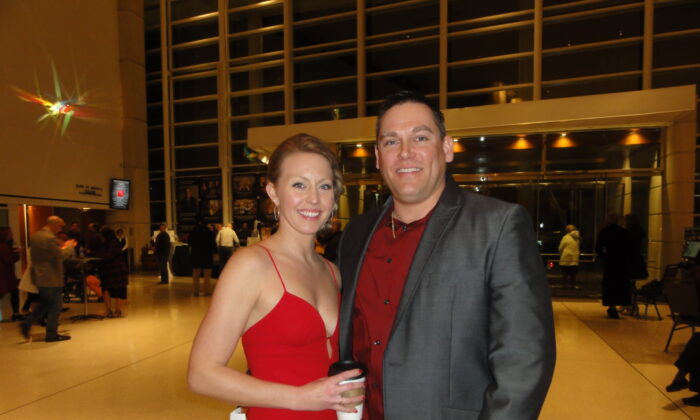 RICHARDSON, Texas — New York-based classical Chinese dance company Shen Yun Performing Arts was the gift Joseph Lambert had been waiting for. After years of wanting to see a performance, his wife Shannon decided to give him the gift of Shen Yun for his birthday—and he “enjoyed every minute of it!”

Every year, audience members from all walks of life report feeling very emotional watching Shen Yun. It is very common for audience members to be moved to tears during the performance, or give teary-eyed interviews.

With the moment they had been waiting for finally upon them at Richardson’s Eisemann Center on Jan. 11 2020, Shannon said she felt very emotional from the beginning of the performance.

“We’ve been wanting to see this show for about five years, so we’re celebrating his 40th birthday, so for us, it was very nice, very emotional, beautiful, just beautiful,” said Shannon, a cosmetologist.

The couple spoke in unison when asked if the show exceeded their expectations: “Absolutely!”

“We love the show,” Shannon said. “It beat our expectations.”

“It was great. I enjoyed every minute of it,” said Joseph, who is a general manager for James Kate Construction.

For Joseph, the music of the performance was one of the best parts.

Joseph described the Chinese instrument erhu as “just amazing” and added to the storytelling, making it very easy to follow along. The voice of this two-stringed ancient Chinese instrument comes as a surprise to many Western audience members. Many have never heard anything quite like it, but are quickly taken away by its emotive melodies.

Shen Yun’s website shares the history of Chinese music, saying its origins can be dated back to distant antiquity.

“Ancient Chinese instruments share a deep connection with Heaven and Earth. The delicate notes of the plucked pipa evoke a sense of celestial realms. The enchanting sound of the 4,000-year-old erhu mimics the human voice. Leading the melody amidst a full Western orchestra, they create a profound musical experience that resonates deep in the heart,” Shen Yun’s website states.

Storytelling Through Dance at Shen Yun

Shannon said they thought Shen Yun was beautiful and very inspiring to watch. The couple both expressed how much they liked the storylines, and how easy they were to follow as presented through dance.

Each Shen Yun performance consists of a series of short dance pieces, telling stories and legends from ancient China to the modern-day, along with a few vocal and instrumental solos. The dance and musical pieces are all new every year.

Shannon said the show made her feel “very good in general”, and very connected to the traditional Chinese culture.

Joseph especially enjoyed the show because he has a connection of his own to Chinese culture.

“I enjoyed it because I’m a martial artist, and I love just the dance in general.” said Joseph.

In this year’s Shen Yun production, there is a dance piece about a Daoist who practices martial arts. In the piece, the disciple must take a leap of faith, and follow his master to the heavens. Shen Yun’s use of innovative technology makes this scene come to life before the audience’s very eyes.

“That was beautiful,” Shannon said, speaking about the piece. “Very interesting how they could take the media and everything and just disappear right there into the picture. It was beautiful.”

The pair also enjoyed the humor of the stories, too.

“Where the bride and the groom came to get the blessing, and then the bride was taken away. I felt there was a lot of humor in that … It was a very fun storyline,” said Shannon about another dance.

Among all of the memorable stories that they enjoyed, the part that moved Joseph the most was the story about the ancient Chinese meditation practice, Falun Dafa. He was moved by the healing miracle that took place in the story, after a practitioner is left shattered from being persecuted for his faith by the Chinese Communist Party. The dance piece is based on a true events.

Both Joseph and Shannon learned about Falun Dafa and the persecution taking place against it in China through this story.

“I would describe it [Shen Yun] as a great time, more than I could expect. Wanted to see it for years, and I’m very pleased with coming and enjoyed it,” said Joseph.

When asked if they would like to come back to see the show again next year, the couple was once again in unison: “Absolutely!”

With reporting by Sophia Zheng and Grace Coulter.