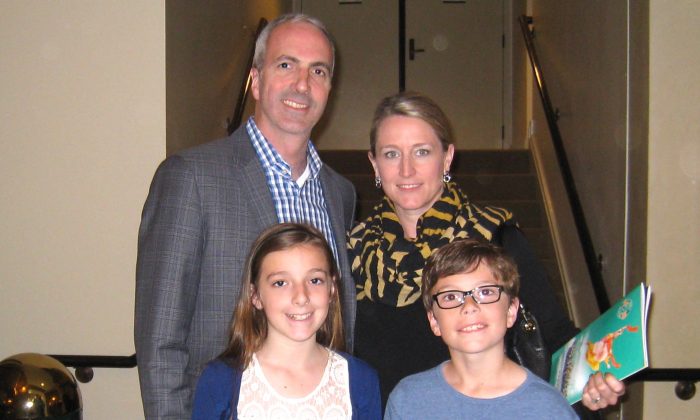 Steve and Renee Ciccarelli and their two children, Sophia and Christopher, at Shen Yun Performing Arts Feb. 22 at California Center for the Arts. (Sophia Fang/Epoch Times)

ESCONDIDO, Calif.—When Steve Ciccarelli took his wife, Renee, and their two children, Sophia and Christopher, to see Shen Yun Performing Arts Feb. 22 at California Center for the Arts, it wasn’t what he expected.

“That was innovative,” he said. “I’m pleasantly surprised.”

Mr. Ciccarelli, VP of technology for Qualcomm, was referring to Shen Yun’s state-of-the-art, digital projection that serves as the backdrop of each vignette throughout the performance. They create a vivid setting for each dance piece, whether it be lofty Tibetan peaks, fertile river valleys, or even celestial paradises, and they “infinitely expand and transform the stage,” according to Shen Yun’s website.

Shen Yun is a New York-based, non-profit, dance and music company that tours the world each year as it seeks to revive the beauty and richness of traditional Chinese culture through performing arts.

While classical Chinese dance has a history of thousands of years, Shen Yun combines the old with the new by incorporating the digital, animated backdrops.

In several pieces that dramatize ancient Chinese legends, the dancers interact with the backdrop by leaping from the back of the stage and appearing suddenly as animations in the backdrop, flying about, and suddenly disappearing and emerging again onto the stage.

Mr. Ciccarelli wasn’t the only one enjoying the creativity.

His wife noticed that the children were captivated by the performance. “Every time I would look over at them, they were just staring,” she said.

Mrs. Ciccarelli enjoyed the different ethnic and folk dances from various regions throughout China, as well as a soft, graceful dance entitled Sleeves of Grace, in which the dancers used long, silk sleeves as props.

‘The color and the life is outstanding’

John Brady, the director of a non-profit health foundation that serves over 15,000 doctors, also attended the Feb. 22 performance.

“The color and the life that’s being brought to the show is outstanding,” he said. “I’m enjoying the show very much.”

He was also pleased with Shen Yun’s live orchestra, which combines classical Western and traditional Easter instruments. “It’s outstanding,” he said. He added that the acoustics at this venue were among the best in the country.