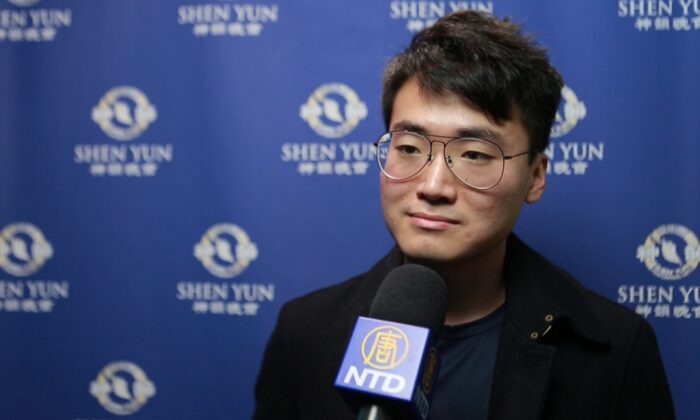 LONDON, U.K.—Once shackled and beaten by Chinese secret police, former British consulate worker Simon Cheng brought a unique perspective to Shen Yun Performing Arts, a theater experience that includes an artistic depiction of those who resist persecution. Cheng, who was detained over participation through social media in Hong Kong’s democracy protests, said the stories he saw in New York-based Shen Yun made him feel emotional, on the verge of tears, and also grateful for the fact that he could see the show itself, a privilege people in China do not have.

Cheng made world headlines in August 2019, when, while returning to his native Hong Kong from a trip to China as a staff member of the British consulate, he was forcibly returned to China where he was detained, interrogated, and abused at the hands of the communist regime. Part of Cheng’s job was to gather information about the Hong Kong protestors as a monitoring exercise, but his interrogators demanded to know information about and forced him to confess to “fomenting unrest on behalf of the British state,” and other accusations, according to Cheng in an interview he gave the BBC.

He was returned to Hong Kong after 15 days and is currently in the UK. Great Britain’s Foreign Secretary Dominic Raab released a statement of support for Cheng after his release and expressed that Cheng’s mistreatment by Chinese authorities while in custody “amounts to torture.” Foreign Secretary Raab also summoned the Chinese ambassador to “express [his] outrage at the brutal and disgraceful treatment of Simon…” at the hands of Chinese authorities.

So what exactly moved Cheng to tears in Shen Yun?

“It’s impressive to me. I’m very grateful [of] Chinese culture, traditional culture and that’s actually my first time to see that classic[al] Chinese dance,” Cheng said. “Young professional actors … I can see the energy and they feel very energetic. What I heard from the audience—that they liked the way of the dance and they liked the dress, it’s really floating,” he added, referring to Shen Yun’s colorful, flowing costumes that many say stay in their minds long after the performance.

Cheng referenced a dance that made use of “water sleeves,” long flowing sleeves the dancers toss and catch with precision as if manipulating water. He saw in the movements something culturally Chinese, and said it made him remember as well the protests in Hong Kong, and felt it was in the spirit.

Shen Yun’s mission is to revive traditional Chinese culture and share it with the world. Because of this, its performers cannot set foot in China due to the regime’s decades-long campaign to eradicate traditional culture, which is seen as a threat to the Chinese Communism Party’s [CCP] legitimacy.

“I heard it never ever get a chance to perform in mainland China. That is so unfortunate,” Cheng said, referring to the classical Chinese dance company itself. “That would be a loss of the Chinese heritage to most of the Chinese people. But what I saw is that I can see the Chinese authority’s persecution of Falun Gong practitioners and some people they just believe in their own faith. So I’m quite sad and I would say that [Shen Yun] is not only a showcase of the Chinese culture but also a warning alarm to the world that Chinese [CCP] thought is now persecuting, even rooting [out] the Chinese traditional culture. That’s the way that we think that is a soft way to let foreigners know the facts happening in China.”

Falun Gong is an ancient form of self-cultivation that follows truthfulness, compassion, and tolerance and includes meditative exercises. Shen Yun artists themselves follow in the global tradition of pursuing artistic breakthroughs by refining their inner characters, and they say their practice of Falun Gong allows them to follow such a path. In addition, the practice has been at the center of the persecution in China since the 1990s.

Cheng elaborated on what moved him most about Shen Yun’s depictions of Falun Gong practitioners and their peaceful resistance of the brutality against them.

“That’s the power of the show,” Cheng said about Shen Yun’s ability to express a message through art. Meanwhile, he added, the torture these people of faith have experienced mirrors his own experience with the Chinese communist regime.

“I feel that echoed with the whole shows and I even feel emotional and even want to cry when I see that they’ve been beaten and even organ harvesting,” Cheng said.

Forced organ harvesting is the gruesome crime of removing vital organs from detainees without their consent, usually as a final form of torture and execution by Chinese communist authorities. Since 2006, volumes of evidence have been amassed that confirms Falun Gong practitioners are among the most targeted groups subjected to organ harvesting. Others include Uyghurs, an ethnic minority from western China, and Christians. But Shen Yun depicts stories of Falun Gong practitioners and their real-life actions to resist the violence and spread the facts about what’s happening to them.

Cheng gleaned any new insights into his culture of origin thanks to Shen Yun.

“Because this is the first time I ever see the most classic Chinese dance, and in between scenes I can see lots of Chinese classic legends and the history in the show. So I think that is a perfect match within the performance,” he said.

Lastly, Cheng commented on the beauty in Shen Yun and the way that the artists achieved the feelings that they evoked. He described what the energy of the show is like.

“I would say that it’s something like lots of flowers … I watched the water sleeve[s]—the women that show very like beauty, what we can feel in the Chinese literature. So that’s a performance in a very classic way, I would say, and that’s a very good way to show that really traditional Chinese culture to the foreign eyes. And I think that is very good to observe, that’s kind of Chinese history and culture which we can’t see in mainland China.”