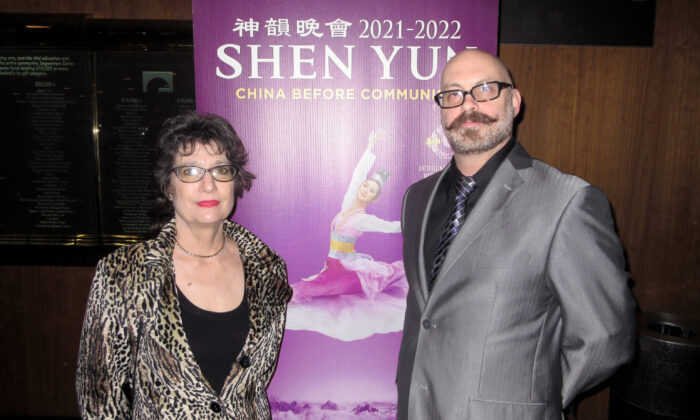 “I’m very impressed by it,” Ms. Canfield said after seeing the performance at Costa Mesa’s Segerstrom Center for the Arts on Jan. 1.

The animated backdrops create seamless interaction between the projections and the actors on the stage.

Ms. Canfield praised the incorporation of this technology into the dances.

“I appreciate the melding of tradition with the technology of today,” she said.

“It’s absolutely beautiful, and it’s captivating with all the different colors and how they are incorporating different symbolism and qualities. It’s fabulous to watch,” he said.

Mr. deMartino had high praise for Shen Yun‘s orchestra and the way it blends classical Western and Chinese instruments.

“You can hear that in the music. It melded really well. It’s great,” he said.

“First, the Western orchestra serves as a foundation, accentuating the distinct sound of Chinese instruments. Second, the bedrock of soul-stirring melodies from the ancient Middle Kingdom is fully brought to life by a Western symphony,” it says.

“Traditional Chinese music emphasizes the expression of inner feelings—the ancients always used musical instruments to relate their states of mind. Western music, meanwhile, focuses on the overall effect of the musical ensemble—and to achieve that, arrangement and harmony are of utmost importance. Shen Yun’s music combines these approaches to capture the essence of both East and West.”

Shen Yun’s performance is a must-see for those who appreciate arts and culture, Mr. deMartino said.

“If you have an interest in traditional Chinese culture, if you are any kind of fan of dance and history, it’s a must-see.”