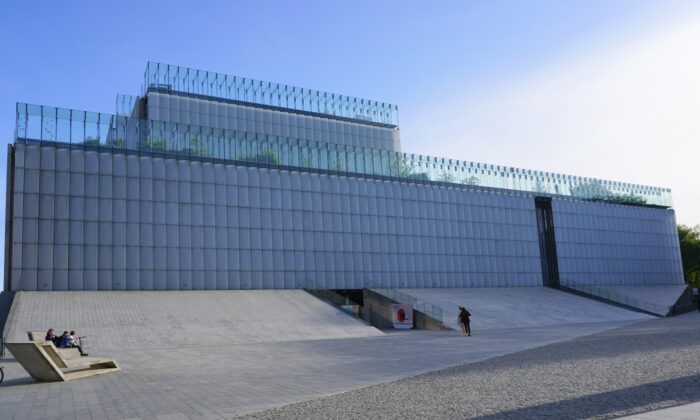 Center for the Meeting of Cultures in Lublin hosted Shen Yun Performing Arts World Company. May 17-19, 2022. (The Epoch Times)

LUBLIN, Poland—The stage of The Opera Hall of The Center for the Meeting of Cultures shone with a feast of colors on Thursday, May 19. Shen Yun Performing Arts enchanted the audience, including the former MP of the 5th term of the Parliament, Ms. Anna Pakuła-Sacharczuk, a philosopher by education, who traveled from Rzeszow to see the show.

New York-based Shen Yun reaches back to the roots of China’s 5000 years of civilization, and with great respect, shows the audience what is most valuable from China’s rich culture.

Shen Yun’s orchestra is a blend of two traditions—Eastern and Western and despite their differences, the instruments have been orchestrated to complement each other.

She also commented that the image of traditional culture exudes “harmony, beauty. It’s rare today for someone to think about the world, about art, that this is the value.”

The ancient Chinese claimed that art should come from a humble and pure mind.

“I feel that art has moved away from that completely [today]. But here we have that kind of thing, which is coming back, and which seems completely universal. It’s amazing that it’s rooted in thousands of years of tradition and culture,” she noted.

Reclaiming What is Valuable

In Chinese tradition, the divine element manifested itself in all human activities, inspired artists and philosophers, and permeated everyday life regardless of social standing. When the Chinese Communist Party came to power, it saw this spiritual and artistic heritage as a threat to its atheistic ideology.

Shen Yun artists combined its artistry with a noble mission to recover the lost traditional culture of pre-communist China.

“It seems to me that this [traditional culture], which is already really deformed in China, is worth recognizing, saving, and showing to people. That’s why this is a great mission that this company is fulfilling,” Ms. Pakuła-Sacharczuk emphasized.

In Paradise and On Earth

Shen Yun is an experience where the audience can travel through the earthly sphere, and watch history unfold, and also enter into celestial lands where the soul can be soothed by the graceful and light-hearted dance of heavenly maidens.

“Man arrives from the hereafter—this aspect is universal to all religions, an analysis of the transcendence of human existence. There were also many touching scenes from everyday life. I am very happy that I came with my son from Rzeszow to see it. I look forward to seeing more performances,” she said.

“I am happy, I needed this, after this sad time of the pandemic when evil unveiled its face in this world. And here something beautiful and uplifting was shown,” she added.

“I would like to extend my warmest regards to the entire company. I really admire not only the incredible artistry, and the skills, but literally everything. Fantastic artists who dance, it is even hard to say dance, because it is still acrobatics at a high level, that shock,” Ms. Pakuła-Sacharczuk said.

In ancient Chinese culture, it was believed that art was used to glorify God and nurture goodness, and the task of the artist was to cultivate virtue and self-improvement—sometimes through meditation. Shen Yun‘s artists continue this tradition, meditating and striving to live according to the principles of truthfulness, compassion and forbearance.

“[Shen Yun artists] are so wonderful, perfect in what they do. At the same time, so humble, there is so much beauty in them. I even pointed out that for so many centuries tradition has dictated that a woman should be modest, and they [the dancers] all don’t flaunt their bare bodies, but the artistry of movement. That’s how pleasant and wonderful all of these people are. Marvelous,” Ms. Anna Pakuła-Sacharczuk summed up.