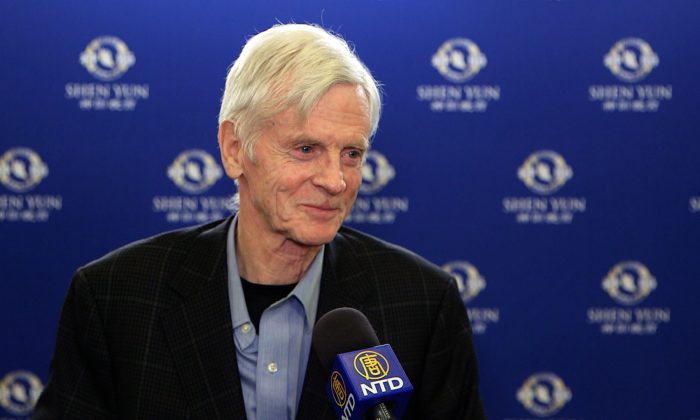 OTTAWA, Canada—David Kilgour has been attending Shen Yun Performing Arts performances since the company’s inception in 2006, and his enthusiasm has yet to wane.

“I’ve seen it here six or seven or eight times. I’ve seen it in Toronto, I’ve seen it in California, and tonight’s was absolutely the best!” he said. “Everything—the songs, the direction, it was all even better than last year, and I didn’t think that was possible.”

Kilgour is a former MP, cabinet minister, lawyer, and prosecutor who has done groundbreaking investigation into the Chinese Communist regime’s organ harvesting practices.

Seeing Ottawa’s National Arts Centre packed with people and all applauding the classical Chinese dance company on stage on Dec. 29, he felt it was a tremendous event.

Kilgour, who has unique insight into the way China is run today, due to his research, had even more reason to be inspired by Shen Yun’s performances.

The  New York-based company’s mission is to revive 5,000 years of Chinese civilization—the true traditional culture that has all but been eradicated under communist rule in modern China.

Kilgour’s work in human rights has furthered awareness in the West about China’s persecution of Tibetans, Christians, Uyghurs, and most recently, since 1999, the spiritual practice of Falun Gong.

He said he had a friend who initially did not want to see Shen Yun, thinking it was a company run by the Chinese regime, but who was delighted to then learn that was not the case at all.

In fact, Shen Yun wants to revive the traditional culture of 5,000 years that the regime is working to suppress. Many of Shen Yun’s artists are actually practitioners of Falun Gong, also known as Falun Dafa, a meditative practice that teaches the three principles of truthfulness, compassion, and tolerance.

According to the program book, these artists take this internal self-betterment seriously, meditating together and improving themselves spiritually on top of working on their skills and technique.

“They believe that cultivating the heart is the way to create art that is beautifully sublime,” the website states.