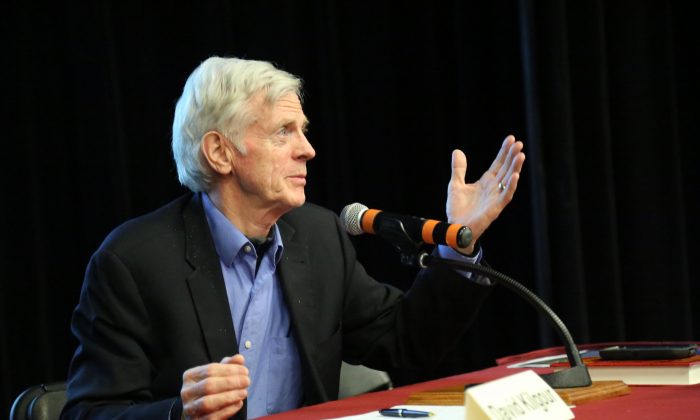 David Kilgour, former Canadian secretary of state for Asia-Pacific, speaks to the audience at a panel discussion following the screening of “Human Harvest” at the University of Ottawa on April 6, 2017. (Jonathen Ren/Epoch Times)
China Human Rights

OTTAWA—On the issue of the Chinese regime’s killing of Falun Gong prisoners of conscience for their organs, the sheer volume of evidence that must be assembled and studied is one of the challenges preventing this abuse from receiving sufficient global attention.

Three books have been published on the topic as well as a 600-page update report by three key investigators, released June 2016, that contains nearly 2,400 references. In this context, using film to explore the topic has been a powerful medium that has helped to alleviate this challenge.

Several films have been produced, including the award-winning documentary “Human Harvest: China’s Illegal Organ Trade,” directed by Vancouver resident Leon Lee, which was shown in Ottawa for the first time this week. It was screened at the University of Ottawa on April 6 as part of National Health Ethics Week coordinated by the Canadian Bioethics Society.

“This film, having won numerous prizes including the Peabody Award in New York in 2015, continues to be shown in many parts of the world,” said David Kilgour in his speech at the event.

Kilgour, who is a former MP, cabinet minister, lawyer, and prosecutor, is featured in the film along with his co-authors of the update report: Winnipeg-based international human rights lawyer David Matas and American investigative journalist Ethan Gutmann.

“As we saw in the film, prisoners of conscience often convicted of nothing are the primary source of pillaged organs. They include Uyghurs, Tibetans, and Christians, but are overwhelmingly Falun Gong practitioners long dehumanized in Party-state media across China,” Kilgour said.

“We conclude that 60,000–100,000 transplants per year are being done across China as opposed to the approximately 10,000 its government claims,” Kilgour said.

Falun Gong practitioner Hongyan Lu, who spoke after Kilgour’s presentation, told the audience how the Chinese regime’s campaign of persecution against Falun Gong, also known as Falun Dafa, impacted her family. Her mother, Huixia Chen, a Falun Gong practitioner currently awaiting trial in China, is the subject of an Amnesty International urgent action. Chen could face a prison sentence of from three years to life.

Like many other practitioners in China, after former Chinese leader Jiang Zemin launched the persecution in 1999, Chen refused to abandon the spiritual practice that had so benefited her. According to many practitioners’ experience, the traditional meditation discipline, which emphasizes healthy living and the principles of “Truthfulness, Compassion, and Tolerance,” brings tremendous benefits for the mind, body, and spirit.

Following an earlier detention of Chen in 2003, her family suffered from ongoing harassment, including threats to end her husband’s employment and hate incitement that turned their neighbours against them. “Under these conditions, my father was forced to divorce my mother,” Lu said.

Chen was detained again last June, and suffered torture. It was not until November 2016 that her family was able to find a lawyer willing to take her case.

“Through him, around Christmas we were able to make contact with my mother for the first time since June,” Lu said. “Before that, the greatest concern for us was that she [had] become a victim for the organ harvesting business.”

“My story is only one of the millions of practitioners whose family like mine fell apart because of this persecution,” she noted.

Reaction from the attendees speaks to the relevance of the issue to Canadians and the importance and urgency of addressing it.

“The average Canadian would be quite shocked to learn the evidence that David Kilgour and David Matas have accumulated about the extent of organ pillaging in China, and also the evidence that exists that Canadians are themselves taking advantage of the availability of pillaged organs in China,” said Brian Lee Crowley, managing director of the Macdonald-Laurier Institute, an Ottawa-based public policy think tank.

“I think the government of Canada has an obligation to ensure that Canada is not contributing to the existence of organ pillaging, and therefore that we outlaw access to this market for organs to Canadians and that we act in every international forum both to outlaw the practice and to bring pressure on the regime in China to end it as soon as possible.”

Kilgour noted in his speech that Spain, Israel, Taiwan, and Italy already ban transplant tourism by their nationals.

“All of us here today and across Canada should urge our own MP to support the Cotler-Genuis bill,” Kilgour said.

‘Evidence That You Cannot Ignore’

“This [film] made me realize how much injustice there is, and how we can do better,” said Karli Zschogner, coordinator for Canada’s All-Party Parliamentary Group on the Prevention of Genocide and Other Crimes Against Humanity.

“It gives a lot of evidence that you cannot ignore,” Zschogner said. “As Canadians and the Canadian government, we have to do our part.”

“This film was very touching and inspiring. It’s sad, but it gives us hope that we have to work more to end that,” said Shahram Golestaneh of the Iran Democratic Association.

“If we don’t do it, we would have the same scene that we have seen in previous centuries and prior to every genocide that has happened, because people ignored what was right to do,” Golestaneh added.

“I’ve been familiar with the travesty of this for a number of years, and it doesn’t get any easier the more one knows. It’s wrong. It’s simply wrong,” said Maureen Korp, a professor and a writer.

“That’s not what medicine should be.”

The panel discussion was moderated by Y.Y. Chen, an assistant professor at the University of Ottawa’s Faculty of Law, who said the film can help people better understand the issue and compel them to “want to do more, to find out more, and try to do something to change this situation.”

“It stays with you,” he said of the film. “We should get informed, spread the word about this issue, and contact your MP.”

Fred Litwin, president of the Free Thinking Film Society, delivered the welcome remarks and noted that his society has highlighted forced organ harvesting twice in the past. “It’s a topic that needs more exposure, more discussion,” he said.

Kilgour, Matas, and Gutmann are founders of the website endorganpillaging.org on which they have posted a petition to the United Nations High Commissioner for Human Rights calling for an immediate end to forced organ harvesting from Falun Gong practitioners in China.

“Get the word out, talk to people, get informed about the issue—all of us can do something different,” Kilgour said, urging everyone to go to the website and sign the petition.