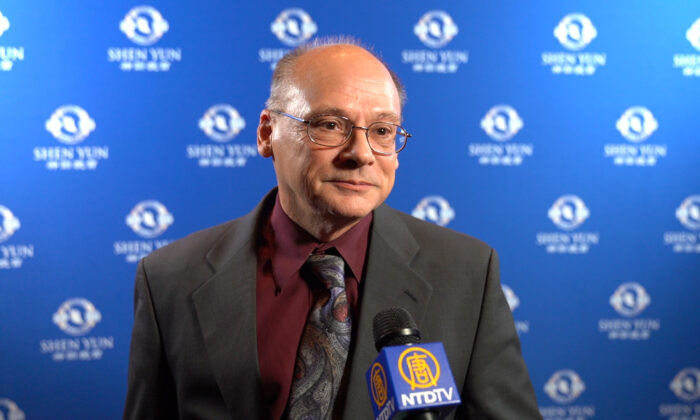 ATLANTA—When the curtain closed on Shen Yun’s color-filled final dance piece in Atlanta, Georgia, on Saturday, a retired military officer in the audience realized something profound.

“After watching the program, the way it was put together, it made me realize that all of our religions in the world are very, very close together—it opened my eyes quite a bit,” said Billy Fenner, former master sergeant, and aircraft maintenance instructor. Fenner attended New York-based Shen Yun Performing Arts on Jan. 4, 2019, at the Cobb Energy Performing Arts Centre. It was a show he won’t soon forget.

“I love the performance. The orchestra was absolutely fantastic, and the ending show was phenomenal. I’ve never seen anything like it. I was very, very impressed,” he said.

Through the deep emotions expressed through classical Chinese dance, as well as through their music, songs, costumes, and digital backdrops, Shen Yun aims to revive authentic Chinese culture, which is a profoundly spiritual tradition that acknowledges the divine.

“Everybody believes in the one Creator. We just have different names,” Fenner said after Shen Yun’s final piece.

A Shen Yun performance consists of a number of short pieces, with emcees who speak briefly between each. “Renewal of Heaven and Earth” is the title of the last dance.

According to the program book’s description for “Renewal,” China’s culture for thousands of years was based on universal values like integrity and loyalty, and a group of people practicing the spiritual discipline Falun Dafa in China are continuing this tradition. “But when the Communist Party chief learns of the practice’s growing popularity, he decides to ban it, and violent persecution erupts. … This piece expresses the belief that the divine is watching and that, with goodness, a radiant future awaits,” the program states.

Fenner could see Shen Yun performers’ dedication to their mission and he wholeheartedly supports it.

“I think they have their heart and soul in it! I believe they believe in what they’re doing. And that’s very good. I like to see it. We’re missing a lot of that in the world today,” he said.

Fenner, a Christian, said he noticed common values between his beliefs and those of Chinese traditions depicted on stage by Shen Yun.

“We were put here for a purpose and that’s … I was very, very impressed. … Everybody has a legacy and every person that does something in the world leaves something behind. And this was absolutely beautiful.

“[Shen Yun] opens your eyes to a whole new meaning of life. It really does. Everybody’s got thoughts today that they don’t really know what the whole world’s all about. … And, depending upon which part of the world you come from, everybody’s diverse. And this [performance] has opened up my eyes to a lot of things that I didn’t think about. In an overall sense, I walk away from this feeling a lot better about what my beliefs are.

“I was born and raised Lutheran, and when I was in the military, I was Baptist. And then I got married to my wife and we became Catholic. And I’m really finding out that a lot of the beliefs around the world are really the same when it comes all the way down to it. That tells me there’s an inner connection somewhere,” he said.

Fenner said he feels our purpose on earth has something to do with the renewal of life. And since Shen Yun speaks to that directly, he said that the show is educational.

“We need more … Everybody’s got a very narrow belief in what they think, and they don’t open their eyes a whole lot,” Fenner added.

He’d like everyone, including his friends and family, to see Shen Yun Performing Arts.

“I will tell them it’s something they have to see and experience for themselves.”

With reporting by Sally Sun, Frank Xie, and Brett Featherstone.