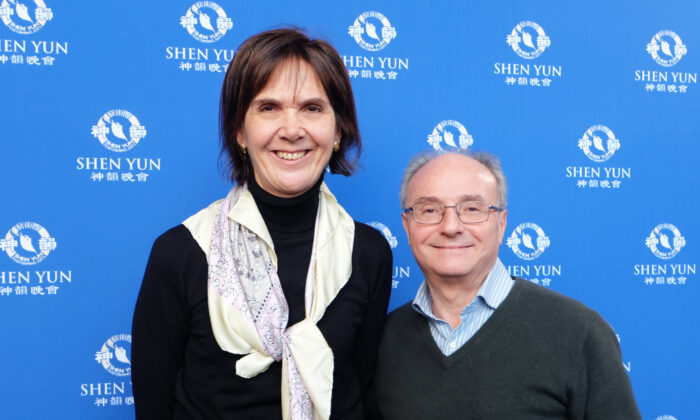 “First of all, congratulations,” he said, as a tip of the hat to New York-based Shen Yun, “and keep on going like this, throughout the world. [Shen Yun artists] are the real ambassadors of the huge Chinese culture, and Chinese culture abroad, and in the whole world, so they also should feel this responsibility, which is very important.”

Guma was consul general of Italy in Toronto from 2012 to 2014. He also served as Italy’s ambassador to Zambia and Ghana during his 40-year diplomatic career. Now a resident of Canada, he attended Shen Yun’s performance at the Living Arts Centre on Jan. 12, 2020.

“The lightness of the movements, of the dancers, they are really perfect I would say. All the choreography was great. And the music of course. The orchestra is fantastic,” Guma said.

For the past 13 years, Shen Yun performers have toured the world sharing China’s authentic artistic traditions, along with its values and virtues. For this, Guma applauded them.

“When I was ambassador, I tried to promote, … I mean, I understand very well what is the meaning of this show. It is very important to transmit to the young generations and also to foreign people the traditional value, the immortal, eternal value that you mentioned, 5,000 years. In 5,000 years from now, some values will still be important, and that is, I think, the goal of [Shen Yun’s] initiative,” Guma said.

“I think that there are some universal values that are, no matter if you are in the Eastern world or Western world, they are of some value for the human being. They are, of course, peace, love, determination in trying to achieve something. They get perfection, that I noticed, these dancers achieved. This is also in the human being trying to be as good as possible and try to improve themselves every day, and I’m sure that they [Shen Yun dancers] have. They are very young, but they have made a lot of sacrifice to reach this form of art. They are really excellent,” Guma said.

“I think that they should have an inner concentration that brings them very close to God, performing at such a fantastic level,” he said.

In fact, divinity is one of the central themes in a Shen Yun performance. Traditionally, Chinese people revered heaven and believed in the Creator, both of which appeared on stage before Guma today.

“I think the theme [of the Creator] is very coherent and it’s, it’s very nice to follow. I think this is perfect,” he said.

“This show gave me a sort of serenity and happiness. It fits very well, the dance, the music, everything. I think that the delicateness is the best thing that I noticed. Also, the stories are very, very moving,” he added.

Guma attended the show with his wife, Dana.

“I hope that we have other opportunities to see this show,” he said, suggesting a permanent billing in Shen Yun’s home state, New York, where he said he’d love to attend when in the area.