Former Broadway Actress: Shen Yun ‘Beyond Anything I Could Have Imagined’ 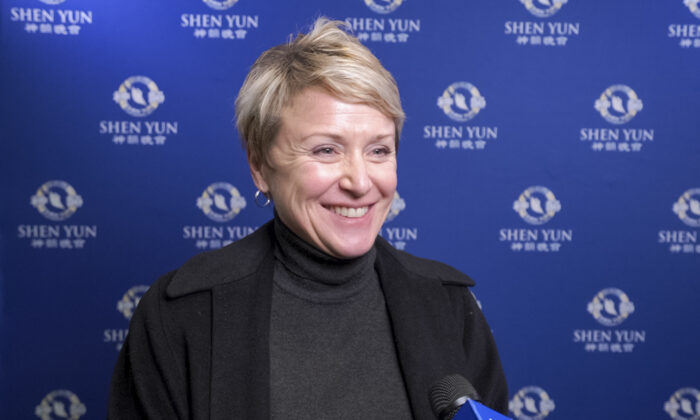 “It’s beyond anything I could have imagined,” she said. “The artistry, the athleticism, the beauty, the way they use their costumes, and the sleeve dance, and the colors.”

Based in New York, Shen Yun is the world’s premier classical Chinese dance company. In each Shen Yun production, dancers are accompanied by a live orchestra with both Eastern and Western musical instruments.

“The orchestra—I love the blending of the Eastern and Western cultures; it’s just so astounding,” Damiano said.

“The fact that it was bringing in sort of the physical, what the dancers were doing, but also visually what the projections were bringing out, it sort of transformed it into this whole other plane,” Damiano said.

Damiano, who is now an account manager for a YouTube company, attended Shen Yun for the first time on the evening of Jan. 11, 2020 at the San Jose Center for the Performing Arts. She came all the way from Los Angeles so she could see Shen Yun in northern California with a friend who lives at Lake Tahoe.

A Revival of Spiritual Culture

Traditional Chinese culture placed great importance on moral values such as faith in the divine and harmony with nature. In recent times, however, the Chinese communist regime has tried to wipe out these ancient traditions and replace them with the communist ideology of atheism.

Shen Yun aims to bring this lost spirituality back to life in its performances.

“I thought that was a really beautiful mission, that there was such a mind-body-spiritual mission part of it,” Damiano said. “That they were wanting to bring that back, I think that’s very important. … It’s really important to have the soul and the mind and the body connection, and it’s very evident in the performance. It’s really beautiful.”

In “Renewal of Heaven and Earth,” the last piece of this year’s production, the dancers tell a story about persecution that is taking place in modern China.

Since 1999, the peaceful spiritual discipline Falun Dafa has been violently oppressed by the Chinese communist regime. In the dance piece, communist police start to persecute Falun Dafa practitioners for their faith, but divine help arrives for the practitioners.

“It seemed like this soul was helping bring all of nature and all of people together and to unify them,” Damiano said of this dance piece. “It seemed like it was coming from the heart and the soul.”

She thought it was very important that a higher power was depicted. She described the performance overall as transcendent.

“It’s a crazy world we live in, and I think we all need to remember that at heart we’re all the same,” she said. “But to keep your culture is so important because you don’t want to lose that part of what makes each culture unique. The love of that can just radiate outwards.”