Former Ballerina: Shen Yun Dancers Are ‘Reaching Out to Eternity Through Their Movements’ 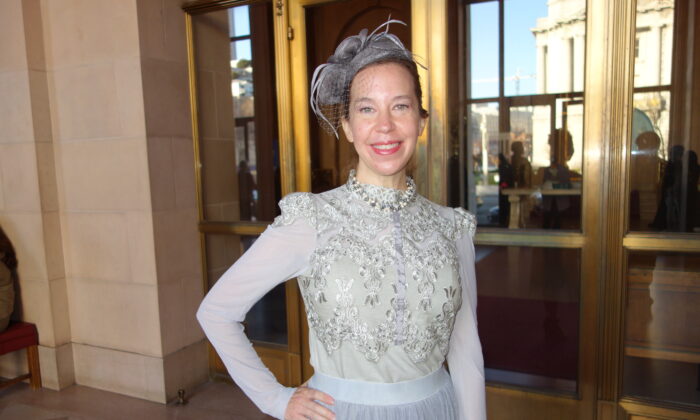 “I wanted to see the beautiful dancing, and I was so excited; it was as beautiful or more beautiful than I thought it would be. It was really a wonderful show,” she said. “Everything about it was wonderful. I loved the messages of compassion, integrity; and I just thought it was a great show. Love the music, the costumes, the colors, the [tumbling techniques]. Everything was wonderful.”

Rudell said she has danced ballet all her life, and so did her mother and grandmother. She was interested to learn that the tumbling techniques that many people think are from acrobatics are actually from classical Chinese dance, the ancient art form that Shen Yun dancers perform on stages around the world.

“I’m not sure that my body could achieve [what the Shen Yun dancers do],” Rudell said. “So I think that it’s really exciting that they can do it, and perhaps something in the mindset enables them to do extraordinary things also, with their dancing and their movement. It is extraordinarily beautiful and makes me feel very joyful to hear the music and see the beautiful colors and see the beautiful movement. Very enlightening.”

Classical Chinese dance was developed in China over thousands of years and is known for its emotional expressiveness. Rudell found the Shen Yun dancers’ skills fantastic.

“Really beautiful dancing,” she said. “Wonderful expression … the way they use their arms, their heads, their shoulders, their hands, their faces. I think that the facial expressions are also so important, and I think that in Western dancing, that gets lost. And so I think that they’re really expressing with their whole bodies; and just the expansiveness of the dancing is very beautiful, and you really feel reaching out to eternity through their movements, and that’s really wonderful.”

While watching Shen Yun, she felt “happy and joyful and inspired and uplifted, and full of life and full of appreciation.”

“I love the beauty of the movement in the costumes,” she said. “The ‘Water Sleeves’ piece was so beautiful because of the way the dancers used the fabric to extend their movement.”

Rudell also enjoyed the orchestra that accompanied the dancers. Shen Yun’s website explains that this unique orchestra combines both Eastern and Western musical traditions, with traditional Chinese instruments leading the melodies on top of a full Western orchestra.

“I loved the two-stringed instrument [erhu],” she said. “It was very moving. It was wonderful.”

Backdrop Creates ‘A Feeling of Heavenliness’

Rudell said the unique digital backdrop used in the performance was incredible. The backdrop’s scenery changes with the different dance pieces, showing scenes from ancient legends, modern China, or even celestial realms.

She loved the way the backdrop was able to “create a feeling of heavenliness and add to the magical quality.”

“[It was a] very uplifting experience to hear the music and see the show and see the beautiful colors and the beautiful sets and scenery, and the integration of the animation … really added to the magic, the storytelling magic. And I think the stories are wonderful. I just think it’s a beautiful, magical show,” she said.

She also found that the performance cleared up some incorrect understandings about Shen Yun that she had heard from some people she knows.

Shen Yun was founded in New York with the mission of reviving China’s authentic traditional culture. This culture was nearly destroyed by the Chinese communist regime through several decades of systematic political campaigns.

To this day, the Chinese Communist Party persecutes those who try to bring back ancient culture and traditional moral values. Shen Yun’s website details how the regime has tried various methods to stop Shen Yun, including threatening theaters and damaging tour buses.

After Rudell saw the performance for herself, she wondered why some people were wary of seeing it.

“Everyone knows that [the Chinese communist regime] has traditionally frowned on any religious belief or any religious practice or anything that smacks of organized anything outside the Communist Party,” she said. “And so this is not news to anyone and should not be shocking—whatever your religious beliefs are, almost every religion promotes compassion, and so I think if they knew what it was, they would not be afraid of it. … They would be missing out if they don’t come, on beautiful music, costumes, colors, choreography, dancing … everything.”

In the performance, she saw the principles of compassion, integrity, and acceptance.

“I also denounce intolerance and would promote the ideas of compassion,” she said. “Anything that brings people to having more compassion and more integrity, I think, is a good thing.”

Traditional Chinese culture included moral values such as faith in the divine and respect for heaven. Many Shen Yun dance pieces tell stories that aim to convey these ancient principles.

“I loved [the storytelling and spirituality], and I noticed that some of my friends and family are afraid to come because they’re afraid of something. I don’t know of what,” Rudell said. “There’s nothing to be afraid of. There’s nothing wrong in my mind with compassion, goodness, integrity. These are all values that I hold dear also, and so I don’t know why anyone would be afraid of that. … If you open yourself to goodness and compassion and those things, I think that’s a good thing.”

She wants to share the beauty of Shen Yun with people she knows.

“I’d invite them to come see it with me. I’d buy them a ticket to come and see it with me because it’s really beautiful and wonderful,” she said.

“Something that I hope to see when I go see an artistic performance is a quality of magic, of the eternal, something beautiful that will stick with me for the rest of my life and bring joy, and I think this is in that category,” she said. “I think I will remember this performance as something very beautiful.”

With reporting by Gary Wang, Cecilia Chen, and Sally Appert.