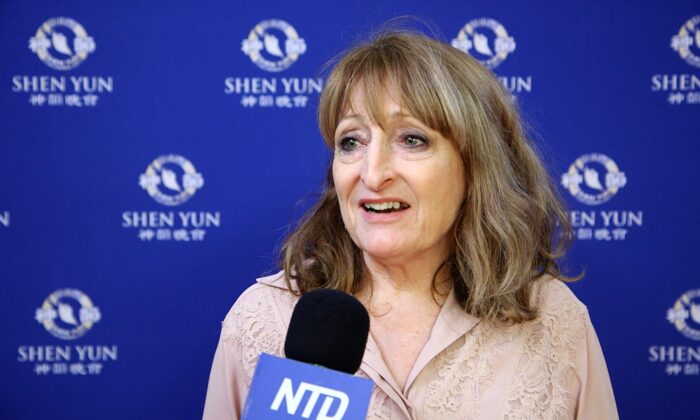 MONTREAL—Shen Yun Performing Arts World Company presented its opening-night performance at Montreal’s Place des Arts – Salle Wilfrid-Pelletier. One of seven touring groups from the New York-based company now traveling the world, their 2020 season has been received with high praise and standing ovations, by audience members who are sometimes moved to tears.

“I thought it was beautiful, breathtaking, spectacular,” said Glynis Poole, a former actor and drama teacher who attended the Jan. 2, 2020 performance.

“I love the fact that sometimes it’s just the beauty in the visual, and other times it’s really making a very important point about the politics in China today, but also ancient stories. The sheer spectacle of it, and the athleticism of the dancers, was really quite amazing,” Poole said.

From an actor’s point of view, Poole though thought “it was great because the physicality—the delivery of the story—the cowboys, that was beautifully acted. No horses there, but you felt they were riding across the plains. So, the physicality, the movement was just so beautiful.”

To revive China’s ancient traditions and authentic culture and share it with the world through arts is Shen Yun’s mission. According to its website, “Through the universal language of music and dance, Shen Yun weaves a wondrous tapestry of heavenly realms, ancient legends, and modern heroic tales, taking you on a journey through 5,000 years of Chinese culture.”

“I think it’s very important,” Poole said in response to Shen Yun’s mission. “It raised awareness of ancient civilization and how important it is to remember our beginnings and also, how skilled people long ago were and how traditions have been passed on. And the wisdom and amazing qualities of these old arts.”

In addition to ancient legends and culture, Shen Yun depicts modern-day stories about the violent persecution against Chinese people with spiritual beliefs.

“I found it very, very moving, the story about modern China. It really made me aware of how scary life must be in modern China. And it also made me aware that although this group—it’s Chinese dance—it’s a troupe who think for themselves, who think outside the box a little bit and are not frightened to give their opinions of what’s going on in their country. I thought that was great,” she said.

“Abetting the Wicked” is one dance that depicts the brutal real-life consequences for Chinese people who defend those who are targeted most in the persecution: followers of Falun Dafa, an ancient method of meditation and self-refinement.

This piece touched Poole’s heart even more than others in the show.

“He was an innocent who was caught in a situation and the fact that he suffered so physically,” Poole said. She described the relationship between the characters depicted and how impactful they were, such as “the growing love and care between the boy and the girl, how distraught she was, and you would start feeling her emotions.

“And the brother, the shock of the brother who was doing what he thought was a good day job, and suddenly was aware of how bad the regime was and how his brother had suffered. I really thought that was very, very moving,” Poole said.

Poole enjoyed the fact that each dance was explained beforehand and appreciated that the emcees of the evening presented in three languages: French, English, and Chinese. “Because obviously the audience is a very mixed audience. So it made you aware of the very multicultural range of the audience,” Poole said.

“And the music … Beautiful! Absolutely beautiful. Very moving and just such a range, going from the more regular classical music to very Chinese music, the range of what they were playing. Obviously, the musical instruments that they were using was quite phenomenal. Great. I loved it,” Poole added.

“Just a beautiful evening. I’m fully enjoying it and I love the fact that it’s, [the pieces] are short and you’re going from one thing to the other. And there is just this huge range in terms of man’s time on Earth—what’s was happening in the past and what’s happening now. I thought it was really great.”