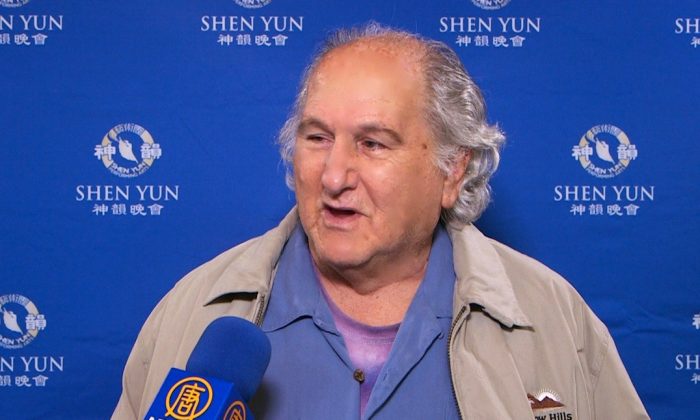 ESCONDIDO, Calif.—Passion and genuine appreciation for music was Paul Warner’s first response to spending an afternoon watching Shen Yun Performing Arts New York Company at the California Center for the Arts on Jan. 27.

A famous composer of classical music himself, Mr. Warner believes music is a “force for good in the world.” As a child prodigy of music, he began studying piano at 7 and by his mid-teens he was studying advanced piano composition and technique with an accomplished music teacher. Always inspired by nature, Mr. Warner’s classical training led him from his roots in the classical style of the European masters’ composition and performance, to a study of eastern and western musical traditions. He now blends these two musical traditions in his compositions.

He added, “I was incredibly impressed with the music, the beauty of it, especially the Chinese music, so beautiful.”

Shen Yun produces rare and hauntingly lovely compositions. “The Western orchestra with its energy and grandeur, and the Chinese instruments with their distinct tones and styles, create a dramatic new sound,” Shen Yun’s website offers.

“But I was very touched by the poetry of it, the beautiful poetic expressions, and the dancing of the women,” he said.

“It seems I was going back to the Tang Dynasty to the golden age. It was just so exquisite.”

He was very impressed to learn that Shen Yun is based in New York and has four companies that tour the world simultaneously. “That’s a big, big thing you have going. I was thrilled, it’s spectacular, beautiful, I’ve never seen anything like it in my life!”

Shen Yun is a non-profit organization formed by a group of world class artists with a mission to preserve and revive the best of the ancient Chinese culture and arts, and to present them as a gift to the world. Shen Yun cannot be seen in communist China, since the current regime is atheistic and has sought, since the Cultural Revolution, to destroy not only ancient treasures but people’s belief in the Buddhist and Taoist sacred, traditional beliefs.

Shen Yun has classical Chinese dance at its heart but also has solo performances, and Mr. Warner was impressed with the singers.

“The baritone was wonderful. He was sweet,” he said. “I really enjoyed his singing.”

While the Shen Yun vocalists sing in Chinese with a bel canto style, on a back screen their words are translated into English for the audience. Mr. Warner appreciated knowing what they were singing.

“Very philosophical! What I loved is the spirituality of this production, just unabashed clear spirituality, which is rare, you don’t find that [any more],” he said.

“People don’t have the courage to show the spiritual nature of this work, and you folks did. So I was very, very thrilled by that too.”

He noted that the synchronization was perfect, of both the dancers and the state of the art digital-backdrop that Shen Yun uses to help the audience journey into mystical realms and different regions of Ancient China.

“Very professional, really well trained, exquisite. Exquisite is the only word you could say, for the females,” Mr. Warner said. “And the males were synchronized, very powerful dancers; really, extremely, very well trained.”

He summed up his experience of the evening to the performers and future audiences.

“I was quite thrilled,” he said in closing, “I use that word a lot but it’s the only word I can use: thrilling, thrilling. Thank you!”