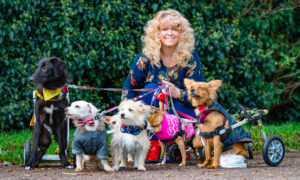 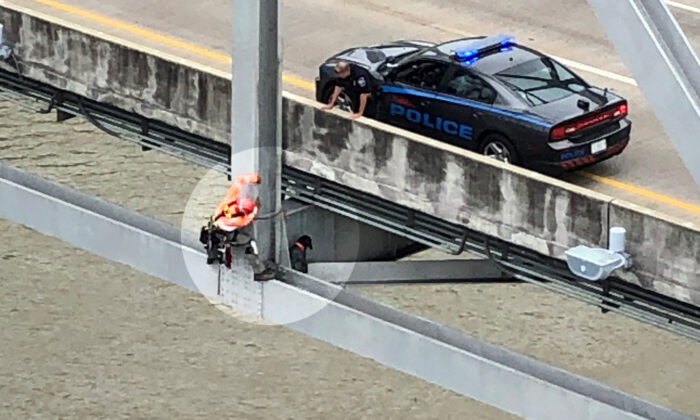 A lone dog, stranded 120 feet above the Mississippi River on the ledge of a bridge, was discovered by just the right people.

Stantec bridge inspection engineer Craig Jenkins was working on the Natchez-Vidalia Bridge, the tallest bridge in Mississippi, on the afternoon of Sept. 20 when he saw something unusual.

He called his supervisor, Ryan Nataluk; however, it wouldn’t be an easy rescue.

“Craig called over the radio, ‘I see a dog!’” Nataluk said, according to CNN. “We’ve never seen a live dog before so at first I thought it was a raccoon.”

However, Jenkins was right. A female bluetick coonhound was cowering on a ledge beneath the bridge, almost 120 feet above the Mississippi River, out of sight of passing traffic but reachable by the inspection crew.

Meanwhile, the two Stantec engineers were about 200 to 240 feet above the river, reported WLBT.

Nataluk—Stantec’s vice president and lead engineer—has 23 years’ experience navigating bridges. It’s a skill that has translated into his free time, reported CNN. As an avid mountain climber, Nataluk regularly camps with his family and has developed a skill for fashioning makeshift harnesses for his own dog to help it across rivers or up steep peaks when necessary.

In an attempt to rescue the stranded dog, Nataluk alerted the police and then clambered onto the bridge ledge, laden with the materials he would need to fashion a safety harness for the pup. He recalled the shy dog’s demeanor changing as soon as she realized she was in safe hands.

Nataluk climbed down to the dog’s position and fastened her into his makeshift harness. Photos and video footage of the amazing rescue operation show Nataluk, and police officer John Fenly, gently lifting the dog over the concrete wall of the bridge to safety.

“[S]he was sniffing around wagging her tail,” Nataluk told WLBT, “she definitely was happy.”

Later, Stantec posted footage of the impressive rescue on Instagram.

“Talk about being in the right place at the right time!” the company’s post read. “No one is sure how she ended up down there, but this heartwarming rescue story proves that not all heroes wear capes!”

An officer with the Natchez Police Department took the dog for medical evaluation. After her incredible rescue, the sweet dog was adopted by a local man, Samuel Jackson, WLBT reported. He named the dog Bridgette and quickly discovered that his new fur family was about to expand beyond expectations: Bridgette was pregnant.

Safe and sound, Bridgette has her second chance at life as her puppies have their first.