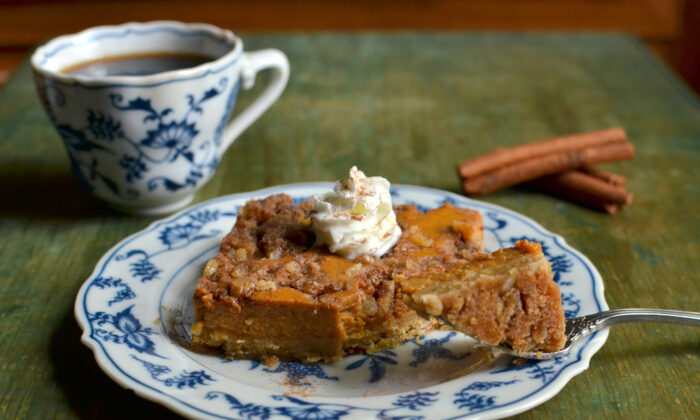 Mom's family-favorite pumpkin pie bars capture all the flavors of the classic with none of the fuss. (Kevin Revolinski)
Food & Dining

Thanksgiving is nearly upon us. It’s a time to be thankful for our friends and family, our good fortune, and for some, the end of pumpkin spice season.

The pumpkin, first cultivated by humans in the Americas as many as 9,000 years ago, was one of the first foods taken back to Europe. Cookbooks in Great Britain already had recipes for pumpkin (or pumpion, as it was called) custards with pastry crust in the 17th century. Surely winter squash such as pumpkin figured in early American harvest meals.

Harvest feasts have long been common, a celebration of a successful growing season and a meal prepared from the bounty. According to a letter from Plymouth Colony in December 1621, the Pilgrims had a three-day feast sometime that fall, and members of the local Wampanoag community were in attendance.

The moniker “Thanksgiving” would appear later. It wasn’t until 1863, while the nation stood divided by the Civil War, that Thanksgiving was proclaimed a national holiday by Abraham Lincoln. Lincoln was likely influenced by a letter from Sarah Josepha Hale, a writer and editor whose work in the late 1800s pushed for a designated feast day and a standardized menu that included turkey, stuffing, and, of course, pumpkin pie.

Whoever came up with this expression likely was referring to eating pie, not making it. Pies require a bit of work, especially just to get the crust right. My mother, now decades in as the prime Thanksgiving dinner cook and baker, cringes at the thought.

“A lot people don’t like pie. I don’t care for it,” she tells me. “I always felt that rolling out pie crust was too much work. Sometimes they just want a little piece, you know, and so…”

And so she picked up a couple of cheats that have become family favorites. (See also her sneaky shortcut for Polish/Slovak cabbage rolls.)

Always a stickler on the importance of healthy eating and yet a strong defender of baked desserts, Mom adds, “Pumpkin is supposed to be very healthy for you.” It’s true. By itself, pumpkin is rich with potassium, vitamin A, and the antioxidant beta-carotene—but you might want to watch the amount of sugar, butter, sweetened condensed milk, and whipping cream with which it is often served. Scratch that. It’s Thanksgiving and you can worry about that some other month. Mom says it’s healthy, so it’s healthy.

Some may note that allspice is absent here. Allspice is made from the dried and ground unripe berries of a tree native to the Caribbean, and it is also the prime ingredient for Jamaican jerk seasoning. The name comes from it being similar to cloves, nutmeg, and cinnamon—you know, all the spices—and so it blends nicely in your pumpkin pie filling, but we go with cloves instead.

Notice the aroma throughout the house while these are baking. You can skip the pumpkin spice potpourri.

The original recipe called for condensed milk, I’m told, but that was way too rich. My mother adds a few pinches extra of some of the spices and cuts back on the sugar in most cases. (I’d round down the brown sugar for the topping myself.) This is great as is, but you may want to make it your own.

Make the crust: Place all the crust ingredients in a bowl, mix them into a crumb-like consistency, and spread evenly in the bottom of a 9-by-13-inch baking pan. You do not need to create raised crust edges. Bake for 10 minutes.

While the crust is baking, make the filling: Beat the eggs, add the remaining ingredients, and mix thoroughly. Pour the filling over the baked crust. Bake for 20 minutes. Insert a knife an inch or two from the edge, and if it comes out clean, it is done.

Meanwhile, make the topping: Mix the chopped walnuts, brown sugar, and melted butter. Sprinkle the mixture evenly across the bars and bake for another 15 minutes.

Let the dish cool and set, then refrigerate it before serving, and afterward if there are leftovers. Cut into squares and top with whipped cream or Cool-Whip.

Still unsure about that texture of pie filling? Maybe cake is a better option for you.

Mix all ingredients and pour into the prepared pan. Bake for 40 to 45 minutes; a toothpick poked into the middle and pulled out clean tells you it’s done. Allow the cake to cool before frosting.

Make the frosting: Mix all the ingredients to a frosting consistency, adding milk as needed if it is too thick for your tastes. Spread the frosting over the cake and sprinkle with crushed walnuts if you choose. Refrigerate leftovers.