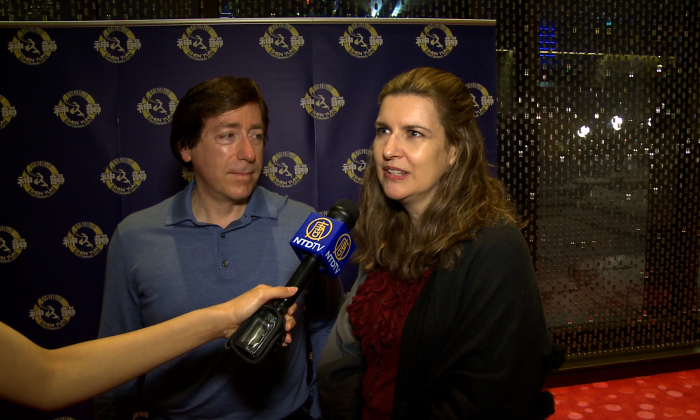 “We really appreciate the orchestra, of course the music, the dancers. The costumes are beautiful, there’s a lot of originality, the scenes are very beautiful, and the performances, that is to say, the stories, [are told] with a lot of humour as well.”

Her colleague, François Patenaude, an oncologist, was equally impressed.

“There is a large creativity course we also learn—all the multi-millennial history of Chinese culture, which is exceptional. Traditional Chinese culture is unique, which is unfortunately little known in the West, except when there are museums with exhibitions, all that. So for us [Shen Yun] is a discovery,” he said.

Dr. Patenaude said both the male and female dancers displayed “a lot of femininity and elegance.”

“It is a controlled strength. There really is a quiet power found in the grace, the elegance, as much for the men as for the women,” added Dr. Patenaude.

“The women also demonstrate power with the jumps and spins,” noted Dr. St-Laurent.

The Shen Yun Orchestra, with its unique blend of Chinese and Western instruments, also came in for praise.

Dr. Patenaude noted “the harmony between the Western instruments and oriental instruments,” adding that “we recognize the many Oriental tones of instruments such as the erhu, the pipa—we know because we sometimes see them in shows on television. But to hear them on stage—that’s interesting.”

“It is very beautiful, and we will of course recommend it to friends,” said Dr. Patenaude. “This is a show I think that is also suitable for all ages; children and adults alike will be able to appreciate it.”