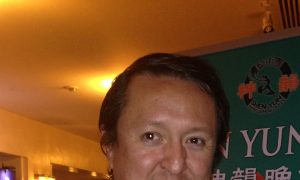 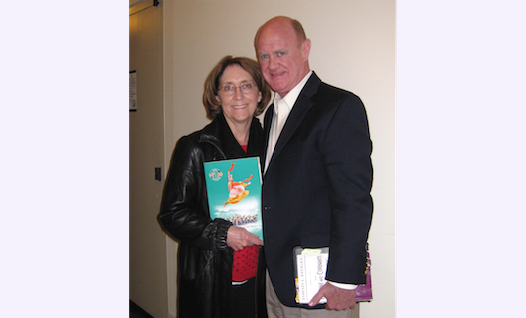 “I enjoyed every minute,” added Ms. Preston, who is an aerobics teacher and housewife, but has also been a dance teacher and music teacher, and choreographed two musicals at San Diego State University. She raised five children with her husband, John Preston, founder and principal of law firm Preston Estate Planning, established in 1982.

New York-based Shen Yun is reviving the true, divinely inspired culture of China, which has a history of 5,000 years, according to the non-profit company website.

“China’s deep cultural traditions are contained in classical Chinese dance, allowing its movements to be richly expressive, such that the personalities and feelings of characters can be portrayed with unparalleled clarity,” states the website.

“I think the stories were told very well with their faces and their bodies and their movements,” said Mrs. Preston. “Just exquisite dancers.”

A Shen Yun performance also includes its own full orchestra, including both Eastern and Western instruments and performing all original music. Each dance features unique handmade costumes, and interactive projected backdrops. Vocal and instrumental soloists are also included to round out the performance.

“It’s also exciting to see this movement because this is more than a show. This is a belief,” said Mr. Preston.

“Both China and the West have a long history of artists integrating spirituality into their work,” states the Shen Yun website. “Today, Shen Yun’s artists follow this tradition, drawing inspiration from the spiritual discipline Falun Dafa.”

Over the past 15 years, the Chinese regime has been systematically arresting, imprisoning, and torturing practitioners of this meditation discipline. Yet Falun Dafa practitioners have responded with peaceful determination, telling their neighbors and the world about the beauty of Falun Dafa and the horrors inflicted on them by the Chinese regime. Shen Yun productions address this little-known aspect of modern Chinese history.

“They stayed true to their beliefs, they were being honest, and having integrity,” said Mrs. Preston.

“It’s always nice to see when an organization can support their beliefs and continue their belief,” said Mr. Preston. “It would be easy to say, ‘Well we give up because our country won’t let us do this anymore.’ But then to come here and promote it and keep it alive and keep the movement, that’s very powerful.”

Mrs. Preston also noticed that the dancers’ costumes were very modest, making the production suitable for all ages.

“We didn’t ever have to worry about something exposed,” she said. “It’s very clean, and very wholesome.

“And I didn’t see any flaws, that’s always nice,” Mrs. Preston added. “I thought it was well worth coming.”

‘There is always something to learn’

Tom and Susie Puac, both retired dental lab technicians, said a friend of theirs attended Shen Yun twice and told them they must see it. “Do not miss it,” their friend said.

They drove an hour to attend the performance.

“It was worth every, every moment,” said Mrs. Puac. “What I loved the most, of course, was seeing the Chinese ancient history.”

“There is always something to learn from the oldest civilization in the world, which is China,” said Mr. Puac. “You have to keep it for generations to come. We don’t want to lose it. It’s very important.”

Mrs. Puac felt that the Chinese culture went deep into her heart through the music and dance, which she said was in complete harmony.

“It just overwhelmed me,” said Mrs. Puac. “I enjoyed it a lot, and I recommend it to everyone.”

George Gaudreault was a junior high school principal before retiring, and he attended Shen Yun with a bus full of people from the Hemet area through Silver State Trailways.

“What do I like about this?” said Mr. Gaudreault of Shen Yun. “I probably could tell you easier what I don’t like about it. Nothing!”

Silver State Trailways sent one bus last week, but there was a long waiting list, so the company added one more bus on Tuesday.

“It’s a fantastic performance,” added Mr. Gaudreault. “Those gowns are beautiful, and the dancing—everybody is so flexible and they’re all in step. I didn’t see one performer that missed their step up there, not one.”

Mr. Gaudreault was especially impressed with the soprano soloists, and hoped to buy a CD of their voices.

“I enjoyed the performance immensely,” he said. “I’m glad I came tonight. … It’s well worth it.”