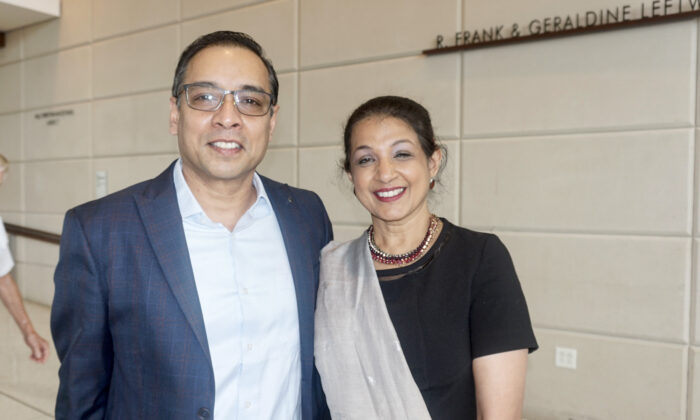 Hede finally saw Shen Yun at the Eisemann Center with her partner, Sherman Crabal, on Sept. 4.

Shen Yun‘s mission is to present “China before communism.”

The Chinese believe that their traditional music and dance, which have a history of over 5,000 years but were virtually swept away when the Chinese Communist Party came to power some 70 years ago, were bequeathed to the Middle Kingdom by divine beings.

“I like the fact that they were talking about divinity and spiritualism. It was a lovely performance. More than that, it was sharing a message and I really loved it,” Hede said.

The performance presents classical and ethnic dances, and music from China’s diverse culture. It also imparts stories with moral and spiritual teachings deriving from China’s Buddhist, Taoist, and Confucian heritage.

Crabal said that he felt that Shen Yun presents life as it should be: “Compassion and how you bring God into your life … divinity. I know we are free to talk about these things these days. It was just wonderful—the theme, the music, everything.”

“The dancers are very, very graceful; the costumes are great. But in all of that, there is a story, so I really love the expressions,” Hede said.

One particular message that resonated with Crabal was one of the vignettes that expressed how everybody is connected and that, despite the passing of hundreds of years, soul mates will always find each other.

Dance connects everybody together and the passion these performers had was really wonderful.
— Sherman Crabal

“Dance connects everybody together and the passion these performers had was really wonderful,” Crabal said.

“Maybe we are ‘old school,’ but you have to revive everything traditional. There’s a meaning, there’s a reason behind how things used to be,” Crabal said.

Dance is like poetry in motion and that is a tradition that should be preserved, Hede said. “I’m very happy that 5,000-year-old traditions are still preserved.”

“I really loved the movement—I’m [going] home [to] practice the turns!” she said.