Conductor: Shen Yun Challenges Us Artists to Have an Ethic 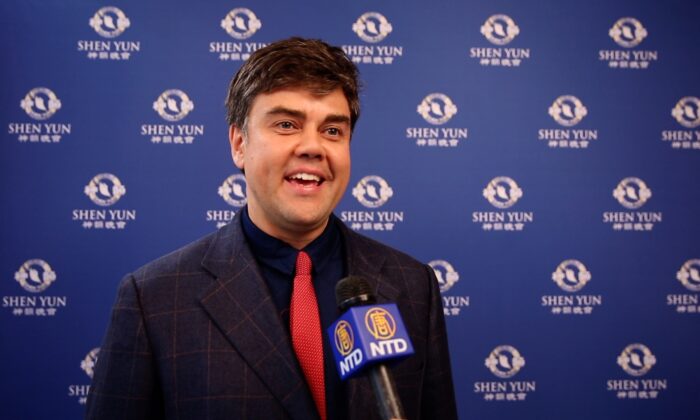 AMSTERDAM, Holland—Fabio Pirola is a conductor with great range, and having heard many good things about the music of New York-based Shen Yun Performing Arts, he attended the matinee performance at the Amsterdam RAI Theater on Feb. 2, 2020.

“I’m quite impressed, it’s very fine art,” Pirola said, adding that he enjoyed every aspect of the performance from the music to the choreography to the moving narratives presented through dance.

“It’s interesting because you can hear different sounds,” he said of the orchestra, noting that classical music of the Western tradition was used but with the unique Chinese instruments and melodies. Pirola was impressed with the arrangement of the music and enjoyed the aesthetic of Shen Yun very much.

“It’s quite fine, it’s very high level, very fine, very delicate sometimes, very dramatic sometimes when you need it for the dramatics of the show,” he said. “So, I am quite impressed.”

Pirola noted that all of the Shen Yun artists practice Falun Dafa, a spiritual discipline that teaches the three principles of truthfulness, compassion, and tolerance. As explained in the program book, these artists are on a shared spiritual journey and take seriously their self-refinement and morality, which lends to the pureness of their art.

As an artist, Pirola felt this was important. As traditional artists have for centuries, they recognize ethics and think about how to be a good human being.

“That’s quite important, especially today,” he said. “In general for music, especially for artist people, because many people just, they get lost and in this way [following a spiritual discipline] you really have the way to grow up also artistically in the right way yourself.”

“So that’s unique, and I think that’s the challenge for the future, and for the art in general,” he said.

Pirola took from the experience the inspiration to do better artistically and spiritually for himself as well.

“It’s very important today to give this message of peace, tolerance, and being—a better and better human being on the earth. And especially for the artist, because we need that for the artist,” he said. “Many artists just get lost in the things that don’t improve themselves, so for the artist to be able to have an ethic, it’s a challenge.”

Pirola felt this may be the crucial challenge of the next century, but with Shen Yun as an example, we are headed the right way. He left the performance with a smile, and encouragement for others to do the same.

“It’s marvelous, so I really hope many people, all the people can watch it and enjoy it,” he said.