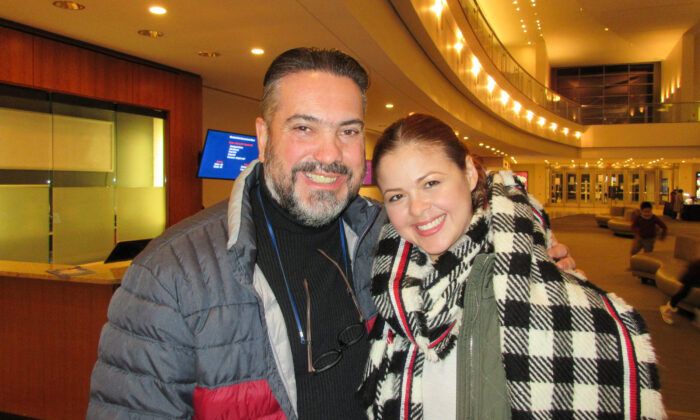 ATLANTA—Conductor Alexandre Ludwig says there was perfect harmony between the different aspects of Shen Yun Performing Arts, including the dancers, the orchestra, and the animated backdrops.

“It’s perfect,” said Mr. Ludwig, who was a music professor in Brazil before moving to the United States.  “The [synchronization] between everything is perfect.”

“I love it, it was wonderful,” she said.

The two saw Shen Yun a the Woodruff Arts Center on Jan. 8.

New York-based Shen Yun, which brings together top artists from around the world, presents classical Chinese dance and music. The dances are accompanied by an orchestra that combines traditional Chinese instruments with classical Western instruments, creating a unique sound. Adding to the beauty of the performance are animated backdrops, which through patented technology, interact with the dances on the stage with superb precision.

Shen Yun‘s aim, as described on the company’s website, is to revive China’s millennia-old culture.

Ms. Ludwig was full of praise for Shen Yun‘s artists and how they showed China’s ancient culture on the stage, noting that that’s no easy task.

“It’s not [so] simple being expressive on the stage, so for me, it was amazing, fascinating,” she said.

“The sync between the dancers was amazing, perfect. And the choreography, it’s wonderful to see the dancers’ presentations.”

Mr. Ludwig said that he could feel the culture behind the different elements of the performance.

I can feel the culture behind it, behind everything.
— Thaise Ludwig

“I can feel it during the music and the dances all the time. I can feel the culture behind it, behind everything,” he said. “I love it.”

As a musician, he said he could appreciate the hard work that the musicians in Shen Yun had to put in to be able to perform at this caliber.  He said he was also impressed that the production featured its own original compositions to accompany the dances.

“Hard work [went] behind this,” he said.

Ms. Ludwig added that she could feel a passion in the performance.

“We feel like they are together in their minds. Not just going, ‘no this is my part, and I will do this,’ but, ‘all of us will do this,'” she said.