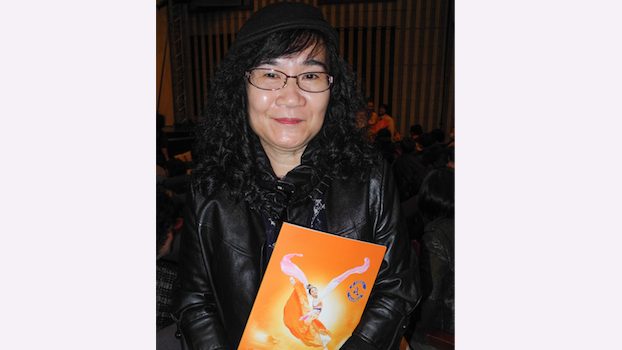 Walking out of the performance hall, she said that not only is Shen Yun very unique, but it has become the icon of the Chinese culture.

She explained, “Shen Yun’s beauty is not unilateral. It is multi-faceted. It touches the bottom of humanity by surprise. I found that each soft program was followed by a more dynamic one. And the choreography was arranged very smoothly. It’s indeed great. The costumes were amazingly beautiful, and the backdrops were very much modernized and overwhelming.”

Speaking of the program The Steadfast Lotus, Ms. Wu said, “The story depicting the principles of truthfulness, compassion, and tolerance moved me to tears twice … The essence of Shen Yun show is its touching stories.”

When seeing Shen Yun the second time, she expressed that she saw something in more detail. “While seeing it the first time, I was touched by its general aspects and just felt that it was very splendid, classical, and professional. But my feeling today is different, as I can appreciate something in more detail … Chinese culture not only contains miserable stories, but it also has something joyous. It (Shen Yun) presents some very common and vague concepts on stage through cheerful dances and music, so it’s very touching.”

“All of the costumes can be performed on catwalk shows. All of them are different and very beautiful. They are indeed amazing.”

“Shen Yun is the symbol of all Chinese people,” she said.