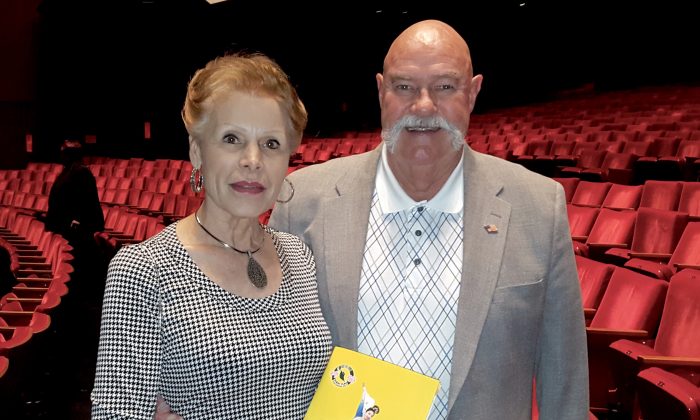 Sundura and David Norton said Shen Yun Performing Arts had tremendous power, after a performance at the Jones Hall for the Performing Arts in Houston on Dec. 29, 2015. (Catherine Yang/Epoch Times)

HOUSTON—”That’s power in that room,” said Sundura Norton as she exited Jones Hall for the Performing Arts, long after the dancers left the stage and the theatergoers had gone. Mrs. Norton, a choreographer and former dance teacher with her own dance school, said the Shen Yun Performing Arts performance was something she wanted to watch over and over and over.

“You couldn’t close your eyes—you didn’t want to close your eyes—everything was magical. The dancing, the grace, every movement was just perfection,” Mrs. Norton said. She attended the performance with her husband David on Dec. 29, and the two had hoped to meet the dancers.

Though the dance was perfection, as Mrs. Norton called it, it was the meaning behind each movement that so captivated her.

It was so powerful… the power of everything was just—I got chills.
— Sundura Norton

“Everything they did up there was a message,” Mrs. Norton said. “It was so powerful… the power of everything was just—I got chills.”

She mentioned the strength and power of the men dancing in one scene, arms mirroring the movements she remembered, and the tension created during another instance in the story. She described the fear of two characters and how the dancers conveyed it to the audience.

“They didn’t have to speak, did they?” Mrs. Norton said.

She explained what she saw behind the dancers’ expressiveness. “Number one, you really have to love dancing. It’s hard work. And you have to be dedicated,” she said.

“Whenever you’re telling a story and it comes from your heart it makes you more powerful,” she said. Because they couldn’t use words, they had to mean it even more, she said. And the Shen Yun performers had “danced [their] way into your heart.”

New York-based Shen Yun tells a story of China that is little known. Once known as the Celestial Empire, China’s traditional culture is deeply spiritual and believed to be divinely bestowed, and audiences say it is evident on stage.

The ideas were presented both in the dance, and in the lyrics of the Chinese bel canto solos performed by baritone Qu Yue and soprano Geng Haolan. The words and translations were projected onto the digital screen, with philosophical themes reflecting on life.