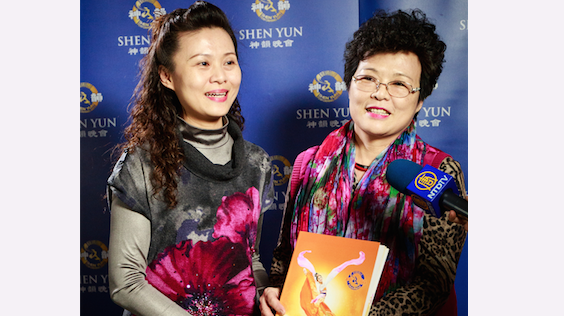 Tsai Wan-Chun, national music teacher, and her mother are thrilled by the dance and music they saw at Shen Yun’s performance on March 3. (Cheng Shun-li/Epoch Times)
Company

KAOHSIUNG, Taiwan—Ms. Tsai Wan-Chun and her mother traveled all the way from eastern to southern Taiwan to see Shen Yun’s performance at the Kaohsiung City Cultural Center on March 1. Ms. Tsai is a Chinese music teacher at Dong Hai Elementary School and has heard about Shen Yun a long time ago.

When the curtain rose, Ms. Tsai was stunned by the combination of the music, lighting, and dancing. “It took my breath away. I was speechless,” said Ms. Tsai.

She was impressed by the natural music style coming from Chinese and Western musical instruments, “It’s not easy the combine the two music systems. There was a pipa and an erhu in the orchestra. The composers have to be very skillful to work with such kind of combination.”

“To mix one Chinese musical instrument with a Western orchestra and it sometimes solos, this is very challenging composing work.” “I feel that the Shen Yun Orchestra has a different sound than other Western orchestras I have heard.”

“This kind of combination of musical instruments brings out the best of the scenes I saw on stage. It’s such a terrific experience, so refreshing!”

“The modern technology on stage was eye opening. I have never seen art performance with background animation and it’s quite unique.”

Can’t Get Enough of the Charming Performance

Chen Jun-Hung, president of Honglinda Co. watched Shen Yun’s performance with his wife on the evening of March 1. Mr. Chen was overjoyed after the performance, “Amazing, definitely worth the ticket price!” “I would have never expected this, I am stunned. The performance is rich and exquisite.”

Mr. Chen believed that Shen Yun utilized a wonderful way to present the 5,000 years of Chinese culture. “The background animation was a marvelous idea and it did an excellent job (telling the stories)!”

When Mr. Chen talked about Ne Zha Churns the Sea, he was overwhelmed by the actions, “It seemed like that the character on the stage in fact went into the projected animation. It’s mesmerizing. I wish there is a sequel.”

Mr. Chen adored the costumes of the Manchurian princesses and their flow pot shoes. “This is the first time I saw the kind of shoes and how women walk in them. Their postures and movements were so charming and graceful. It’s truly beautiful. They must have put in a lot of effort,” said Mr. Chen.

Shen Yun Brought Me to the Land of the Divine

“Shen Yun brought me to the land of the divine and took me through 5,000 years of Chinese culture,” said mainland Chinese resident Mr. Li, who brought his family from Guangdong province to watch Shen Yun at the Kaohsiung Cultural Center.

Mr. Li said that although he had seen Shen Yun on DVD in China before, seeing the performance live amazed him. “I would like to express my gratitude to Shen Yun for bringing China’s 5,000 years of culture to the world,” said Li. “Every program was amazing; words cannot describe my excitement. I hope that more people in China will have the chance to see Shen Yun.”

“I was very moved by the live show today,” he said.

“Thank you, Shen Yun, for bringing us such a spectacular performance. Shen Yun took me through heavens and earth and allowed me to experience each Chinese dynasty. I really enjoyed the performance and my feelings cannot be described in words.”

“Every performance was amazing and touching,” said Mrs. Li. “Words cannot describe how moved I was when the first piece began, telling us that we are all descended from the divine.”

She added, “The vocal soloists’ voices really penetrate the soul and awaken the compassion in people.”

A Glimpse of True Arts

Yu Hong-Yi expressed that he admired the profundity and richness of the Shen Yun performance which ushered the audiences to have a glimpse of true arts and spirituality, and that it’s the pride of all Chinese people.

The Shen Yun website states, “For 5,000 years divine culture flourished in the land of China. Humanity’s treasure was nearly lost, but through breathtaking music and dance, Shen Yun is bringing back this glorious culture.”

He praised, “Shen Yun includes the connotations of Buddhism, Daoism and godhood in its program. It also perfectly depicts the features of local humanity. Therefore, it actually covers something about heaven, earth and human.” He added that it’s great to invite Shen Yun to perform in Taiwan, and he was delighted to have this opportunity to see its performance this time.

Amazed by the connotations in Shen Yun performances, Yu Hong-Yi said, “Shen Yun perfectly enlightens us and helps us to have a peaceful mind.”