CEO’s Emotional Experience at Shen Yun Brings Him to Tears 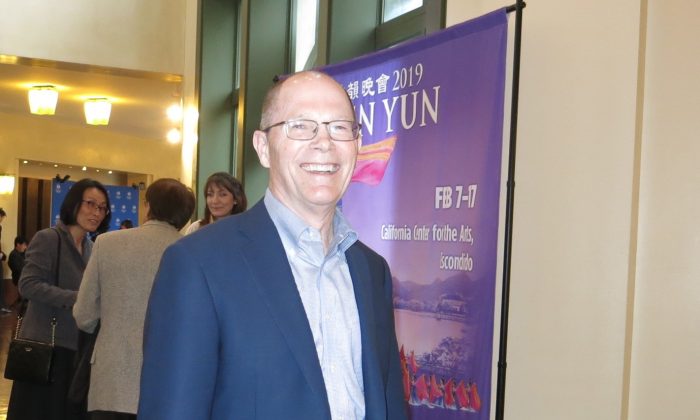 The Shen Yun company was founded in New York in 2006, but it actually focuses on Chinese culture—the authentic, traditional culture of China—which has a history of 5,000 years. Each performance includes a live orchestra, classical Chinese dance, ethnic and story-based dances, musical soloists, and more.

Classical Chinese dance is an extremely expressive art form that has been perfected over thousands of years, and it’s the main feature of a Shen Yun performance.

“[The dancers] are so beautiful. It’s beautifully done. The orchestration is so perfect. The synchronization was so great. Everything is so beautiful. I really enjoyed it. The music I loved, too,” said McDowell.

“That was fantastic, two strings and all that sound, amazing,” he said. “It got me a little teary-eyed. It feels like it’s deep inside you when she’s playing. I loved it.”

The CEO was also impressed with the interaction between the dancers and the digital backdrop. In some scenes, the dancers even appear to jump into or out of the background itself.

One of the dance vignettes that particularly stood out to McDowell was a humorous scene featuring a clumsy monk.

“I thought that was really funny, really entertaining,” he said.

The stories range from ancient myth to present day, tragic to joyful, presenting a comprehensive introduction to the Chinese cultural experience.

Overall, McDowell could tell there was also a theme of spirituality throughout the performance. He has meditated before, so he appreciated hearing that the artists practice their own meditation, which inspires them to achieve excellence in their day-to-day lives.

Shen Yun itself can be translated as “divine beauty,” or “the beauty of divine beings dancing.”

“It’s almost like it had the feeling that the dancers were trying to show that everyone is kind of the divine embodiment on earth, and trying to get back to heaven. It meant something to me. I can feel that we all have this connection,” said McDowell.

In summary, he said Shen Yun was a “very emotional experience” with a lot of color and beautiful music.

With reporting by Alex Lee and Sarah Le.